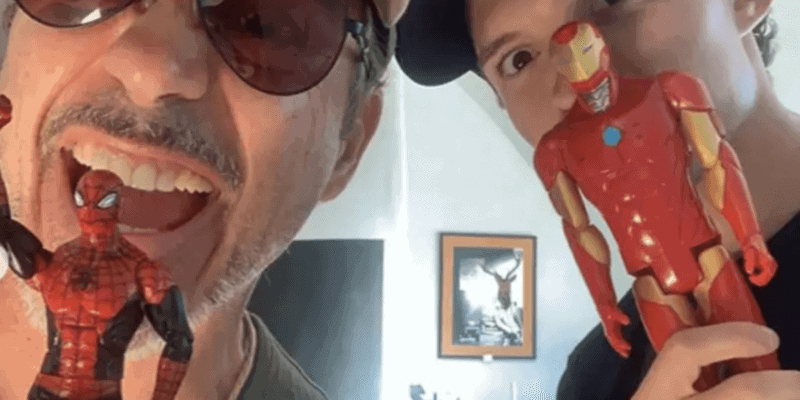 If you are a Marvel fan who watched Avenger’s Endgame, you likely often will hear yourself saying “I love you 3000” to the special people in your life, and then breaking down into tears because you are reminded that Tony Stark is dead.

When it comes to the Marvel Cinematic Universe, many fans know that Spider-Man/Peter Parker played by actor Tom Holland was taken under Iron Man/Tony Stark’s wing, of course, played by the incredibly talented Robert Downey Jr. MCU movie watchers were able to see the father-son bond really show through on-screen, and it is looking like that closeness was not acting, but a real-life connection.

It all started yesterday on Instagram. Tom Holland posted a story in an interestingly patterned orange jacket with a little bit of a riddle. The photo’s text said, “Looking after your jacket mate,” however no one knew who Holland was referring to.

Then the ever so cheeky Robert Downey Jr. made the mystery disappear as he reposted the story to his account and said: “Thank you brother” with a sparkly orange jacket emoji.

The Robert Downey Jr. many Marvel fans may be used to is a quick-witted, dry character that doesn’t exude too many moments of deep care and love to the people around him, but it looks like real like Downey is a lot more giving. There must be a backstory to the jacket, and why Robert would hand it off to Tom, especially considering how eclectic it is.

Although Downey has retired his Marvel powers as Iron Man, Holland is just getting started. Comicbook.com shared that Kevin Feige noted:

“It’ll be fun to see Spidey back in his element, out of the shadow of Tony, out of the shadow of the other Avengers, as his own man now, as his own hero,” Feige said in an interview. “And yet now facing his own challenges that aren’t coming from Avengers fighting, like [Captain America: Civil War], or aliens coming, like Infinity War or Endgame. It’s all Peter focused and Peter based.”

Spider-Man has been more in the shadows as opposed to leading, espcially in Avengers movies, but now it will be interesting to see how his confidence and powers develop.

Do you think Robert Downey Jr. should return to Marvel?