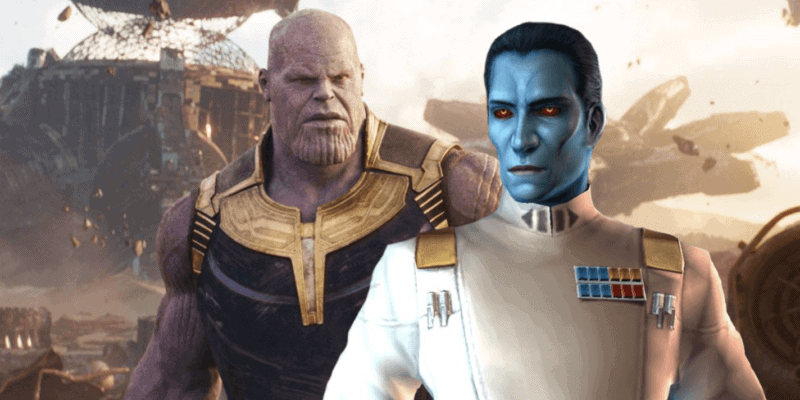 Darth Vader’s days as the scariest Star Wars villain might be numbered.

After rising to the rank of Grand Admiral, Thrawn commanded the Seventh Fleet and was assigned to destroy the rebels of the Lothal sector, eventually tracking them down, culminating in the battle of Atollon. Phoenix Squadron was largely destroyed, and Thrawn encountered a being known as the Bendu who predicted his eventual defeat. After many battles with the Rebels, Thrawn and his fleet were defeated during the liberation of Lothal by Ezra Bridger [voiced by Taylor Gray] and the Purrgil. The Purrgil wrapped Thrawn in their tentacles and took him and Ezra through hyperspace to parts unknown.

Now, the presumption is that Mandalorian spinoff Ahsoka will pick-up where Tano’s Season 2 storyline left off — with her searching for Thrawn and Bridger. Some fans even think Disney and Lucasfilm will use this series to erase the events of the sequel trilogy via the World Between Worlds.

As the Star Wars universe continues to expand — both on the big screen with upcoming theatrical releases and on the Disney+ streaming platform — Thrawn’s rise as a popular villain offers the potential for him to become for Star Wars what Thanos has been for the Marvel Cinematic Universe, an overarching supervillain who can strike terror into the hearts of characters across the Star Wars timeline.

Not only is Thrawn a great villain on par with Thanos, but they’re also both aliens with unique coloring. The comparisons write themselves….

…Ahsoka Tano’s spinoff Ahsoka will surely include him as a villain, so this theory isn’t completely baseless. Including The Mandalorian, The Book of Boba Fett [featuring Temuera Morrison as the bounty hunter and Ming-Na Wen as Fennec Shand], and Rangers of the New Republic [potentially featuring Gina Carano as Cara Dune] shouldn’t be difficult either, as they all take place around the same time.

As it stands, Moff Gideon [Giancarlo Esposito] is the main villain of The Mandalorian, but he’d be outranked by Thrawn. Both Thrawn and Moff Gideon also experimented with cloning and transference of Force abilities. It’s possible we may even see them work together.

Empire sympathizer Gideon and his Imperial remnant have played a major role in both seasons of The Mandalorian so far.

Although the Season 2 finale ended with Din Djarin (Pedro Pascal) and his unlikely crew — including Bo-Katan Kryze (Katee Sackhoff), Koska Reeves (Mercedes Varnado/Sasha Banks), and Cara Dune (Gina Carano) — taking control of Gideon’s Imperial cruiser, Djarin did spare his life, leaving him open to a reappearance supporting the Galactic Empire down the road.

Timeline wise, of course, there are some issues with Thrawn being cast as an overarching Star Wars villain. Inverse notes:

…by the time of The Mandalorian, Obi-Wan and Cassian Andor are both confirmed to be dead. The other show set in the past, The Acolyte [directed by Russian Doll’s Leslye Headland], would prove an issue as it’s set in the last days of the High Republic. Unless they freeze the protagonist in carbonite, Captain America-style, a crossover may be impossible.

This doesn’t mean, however, that the creative team behind The Mandalorian saga couldn’t figure out a way to make Thrawn a threat somehow, perhaps even using time travel and the World Between Worlds/The Veil of the Force as a larger part of the Star Wars universe than it currently is.

Jon Favreau and Dave Filoni have surprised us before and they undoubtedly will again. With the success of the Marvel Cinematic Universe and Thanos, it wouldn’t be shocking to see Disney and Lucasfilm executives try a similar tactic with Star Wars, particularly as The Walt Disney Company’s new focus on streaming allows them to expand the Star Wars galaxy further than ever before.

What do you think? Should Star Wars develop a villain similar to Thanos? Is this even something you think would be possible as a Star Wars fan?