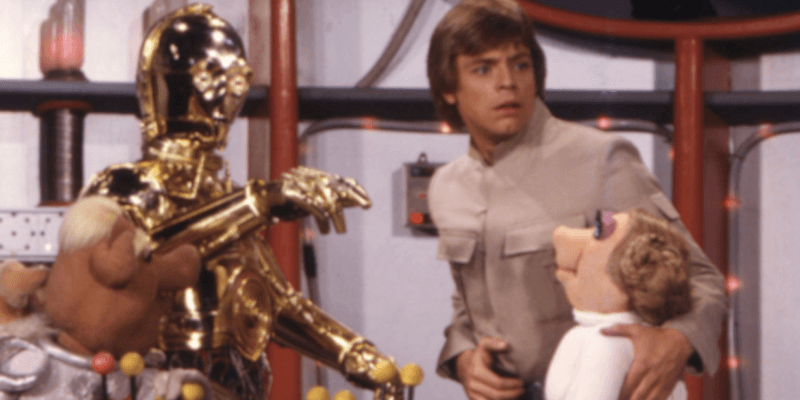 To casual fans, George Lucas’s Star Wars and Jim Henson’s The Muppets probably seem to have very little in common.

In reality, however, the two franchises have a long and storied history. The master puppeteers at Jim Henson Studios even created the original Yoda puppet for the Star Wars original trilogy!

Furthermore, Lucas offered the part of Yoda to Henson himself, but the entertainment icon turned down the role due to commitments with The Great Muppet Caper project. Instead, Henson offered the part to Frank Oz — who voiced numerous Muppet characters, including Miss Piggy.

Oz, of course, has gone on to become synonymous with Grand Master Yoda ever since Star Wars fans first met him in a Dagobah swamp in Star Wars: Episode V – The Empire Strikes Back.

How The Muppets Spoiled Empire Strikes Back

A 1980 episode of The Muppets Show actually spoiled several elements of Empire Strikes Back months before it hit movie theaters!

In the fourth season of The Muppets Show (“Episode 417: Star Wars“), it comes to light that Kermit has hired the “Argyle Gargoyle,” Scottish Angus McGonagle, to host the episode. Seemingly out of thin air, Jedi Knight Luke Skywalker, C-3PO and R2-D2 come bursting through the wall to save Chewbacca, who has sent them an SOS — “Help, I am being held prisoner by a bunch of weird turkeys!”

As zany as it was, this unique episode boasted some of the only new Star Wars material created between the first movie in 1977 and the release of The Empire Strikes Back on May 21, 1980.

After the Star Wars characters arrive, Scooter shouts, “They’d make much better hosts than McGonagle!” and promptly shoves the gargoyle out of the way.

Thus, the Star Wars episode of The Muppets begins.

SF Gate shared these details about how the seemingly oddball crossover came to be in the first place:

“This weird mashup of flavors was not merely facilitated by Frank Oz’s work on ‘Star Wars: The Empire Strikes Back,’ but by geography: ‘The Muppet Show’s’ Eldon Avenue Studios were just one town over from ‘Star Wars’’ Elstree Studios,” Susana Polo writes for Polygon. “Filming on Empire was well underway, so the Lucasfilm folks just hopped over with the props and costumes.”

“The Empire Strikes Back” wasn’t released until May of that year, four months after the episode aired, so in what Polo calls “a secret bit of ‘Star Wars’ history,” this episode of “The Muppet Show” is actually the first time that Mark Hamill appeared on film in his “Empire Strikes Back” costume.

In addition to spoiling Hamill’s costume, one particular sketch, “Pigs In Space,” provides a glimpse of a much bigger Empire Strikes Back plot point — Darth Vader’s real identity.

The final scene of this now-famous Muppets sketch features a character named Dearth Nadir. The presence of the helmeted villain sends shockwaves of fear through everyone onboard the Swinetrek ship (sound familiar?)

The narrator of the episode says, “Stay tuned for part two, when the Swinetrek lands on Koozebane and we learn the true identity of this arch-fiend.”

As SF Gate noted, the next few moments nearly give away Empire Strike Back’s most iconic scene:

“The world will never know!” Nadir says in a screeching voice that sounds exactly like a certain hook-nosed blue Muppet. The gag is that while the mask is supposed to conceal Nadir’s identity, Gonzo’s profile is a dead giveaway of who is inside.

This, of course, hints at the “No, I am your father” scene that has become such a part of cinematic history that even non-Star Wars fans are familiar with it. The moment when it was revealed that the most feared Sith Lord in the galaxy was once Anakin Skywalker changed the course of the Star Wars franchise and instantly cemented itself in movie lore.

Darth Vader will be back.

For over 40 years, the Dark Lord has been one of the driving forces of the Star Wars universe — and he’s not done yet. At the 2020 Disney Investor Day event, Lucasfilm President Kathleen Kennedy confirmed that Hayden Christensen will reprise his prequel trilogy role as Darth Vader in the upcoming Disney+ show, OBI-WAN KENOBI: An Original Series.

Actor Ewan McGregor will also return as Jedi Master Obi-Wan Kenobi in the series, which will be set about 10 years after the events of Star Wars: Episode III – Revenge of the Sith (2005).

McGregor recently confirmed that the show will shoot in Los Angeles. Although it has not been formally announced, there is a chance that OBI-WAN KENOBI will use the same amazing virtual effects soundstage — The Volume — that The Mandalorian uses for its immersive sets.

Until OBI-WAN KENOBI: An Original Series debuts sometime in 2022, Star Wars and Muppets fans can get their fill of the franchises on Disney+. All five seasons of The Muppets Show dropped on the streaming platform on February 19, The Muppet Babies animated series is available for the little ones in your life, and the entire Skywalker Saga is also available to watch anytime.

What do you think about The Muppets spoiling Star Wars: The Empire Strikes Back?