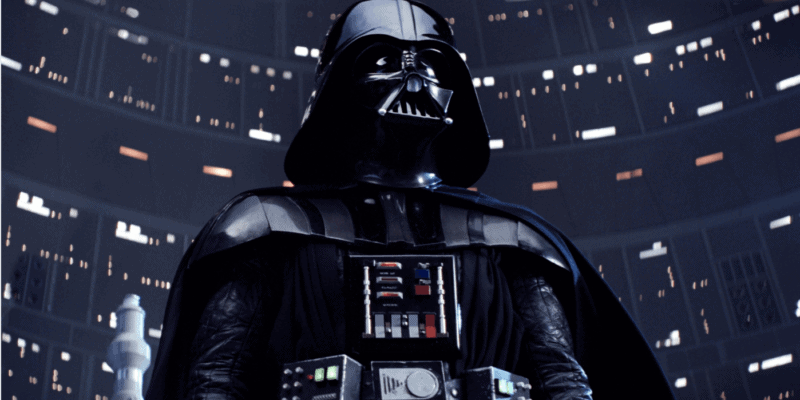 Darth Vader is perhaps one of the most formidable villains in cinematic history.

Even if you’ve never seen a single Star Wars movie, you probably know the scene in which Darth Vader tells Luke Skywalker (Mark Hamill), “No, I am your father,” understandably sending young Luke — and later, his twin sister, Princess Leia Organa (Carrie Fisher) —  into something of an emotional tailspin.

When Anakin Skywalker (Hayden Christensen in the prequel trilogy) broke Padme Amidala’s (Natalie Portman) heart and turned to the dark side — an unfortunate series of events that plays out in Star Wars: Episode III – Revenge of the Sith (2005) — he ultimately wound-up on the planet Mustafar, where Star Wars fans know he fully realized his potential as the Dark Lord.

During this battle, both of Vader’s legs and his left arm were severed, leaving him basically defenseless against Kenobi. Since Mustafar was a volcanic planet, it’s no surprise that legless Vader fell down the craggy landscape, landed near a lava river, and was ultimately burned beyond recognition.

This brings us to the point of this article — the chest plate buttons on Darth Vader’s suit.

The buttons and switches went through several iterations throughout George Lucas’s Skywalker Saga films, as seen in the Pinterest post below:

In Revenge of the Sith, the top button is green and the lower switches are reversed, with the red switch sitting to the left of the gray ones. In George Lucas’s first Star Wars movie, Star Wars: Episode IV – A New Hope (1977), this red switch was white and the gray switches had a much more metallic silver sheen.

Finally, in Star Wars: Episode V – The Empire Strikes Back (1980) and Star Wars: Episode IV – Return of The Jedi (1983) the buttons on Vader’s chest have their most iconic colors, a blue button in place of the green and three gray switches next to a right-hand red one.

These buttons and switches kept Darth Vader alive, doing everything from controlling the temperature of his suit to providing life support functions.

To that end, as it turns out, Vader could have been killed with just one push of a button the entire time he was terrorizing the galaxy.

Vader nearly loses his life twice, in fact, in the Star Wars Expanded Universe/Star Wars Legends. This was due largely to the exposed position of his life support panel.

In Sean Williams’s The Force Unleashed II, Darth Vader was the victim of a field generator explosion during a lightsaber battle with Galen Marek. Then in Legends’ Evasive Action: Recruitment by Paul Ens, a cyborg character deactivated Darth Vader’s iconic armor.

In yet another non-canon Legends novel, Dark Lord: The Rise of Darth Vader, Palpatine makes it known that the life support functions on Vader’s suit are highly susceptible to electrical damage — this was clearly by design since Palpatine’s favorite method of attack was Force Lightning. It allowed him to control his apprentice with the constant threat of electrocution.

While we may never know exactly why nobody killed Darth Vader with the simple push of a button (okay, the real reason is that George Lucas had plans for him that didn’t involve death by chest plate), it is certainly intriguing to know that one of the Galactic Empire’s greatest Sith Lords could have been so easily taken down.

You can next catch Darth Vader in the Star Wars universe when Hayden Christensen reprises his prequel trilogy role in OBI-WAN KENOBI: An Original Series on Disney+ sometime in 2022. Ewan McGregor will also be returning as the iconic Jedi Knight in the series that is set to take place about a decade after Revenge of the Sith.

Would you like more details about Darth Vader’s chest buttons in the existing Star Wars canon? Is the Sith Lord one of your favorite characters in the Star Wars franchise?