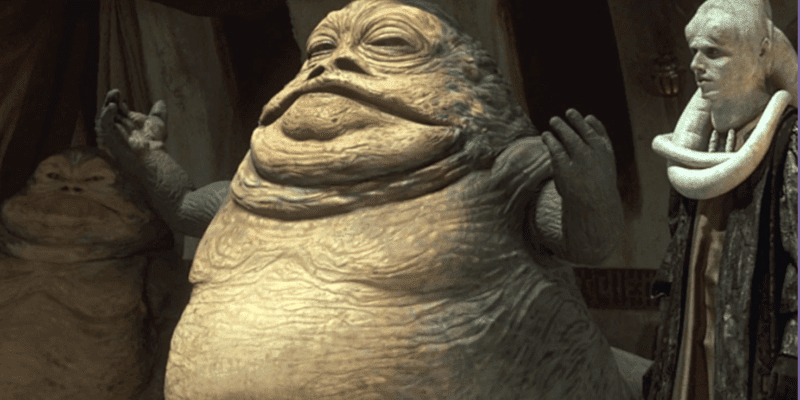 If you’ve ever seen the Star Wars original trilogy, there’s no doubt you’re familiar with Jabba the Hutt.

As a matter of fact, the Boba Fett Sarlacc pit incident in Return of the Jedi wouldn’t exist without Jabba. The bounty hunter was working for the Hutt crime syndicate at the time.

Hutt is also mentioned in both Star Wars: Episode IV – A New Hope (1977) and Star Wars: Episode V – The Empire Strikes Back (1980), making him a major player in the Star Wars saga long before fans were officially introduced to him in the final film of the original Star Wars trilogy.

By the time Solo is rescued from Jabba the Hutt’s palace in 4 ABY, the Hutts were a major player in the criminal underworld, not only on Tatooine, but throughout the Star Wars galaxy. Never before, though, has the history of the Hutt clan been deeply explored in Star Wars canon.

That’s all about to change.

“I think that this gives us a chance to look at the Hutts as an organization, as a group, in the same way the High Republic gives us a chance to look at what the Jedi, when Obi Wan talks about the Jedi and he’s talking about that period of when they were at their height which obviously isn’t the pre-courses as we see find out when we see the prequels, you know I think we all expected that’s what the prequels were.”

“And then through the story, we realized that it was rose-tinted glasses from before that. With the Hutts as well, we know that with the warlords, there is a history there when they weren’t just a bunch of gangsters, they had power then they’ve got their own area of space. They’ve got Hutt Space. And so then there must have been conflicts when we were discussing the idea of Republic pushing out into the frontier that yes, they would come up against the Nihil, but they would also come up against people like the Hutts who have had a free reign in that past space.”

Although we won’t see Jabba himself in The High Republic — it takes place approximately 200 years before Star Wars: Episode I – The Phantom Menace (1999) — it will certainly be interesting to discover the backstory of the Hutts as a whole. Jabba, after all, wouldn’t have existed without all of the Hutts who came before.

Will Jabba the Hutt return to Star Wars?

Since Princess Leia killed Jabba the Hutt in Return of the Jedi, the only way to see the crime lord character again would be in a prequel series or a flashback sequence.

One viable possibility is that there will be a flashback to Jabba’s criminal reign in upcoming The Mandalorian spinoff series, The Book of Boba Fett. Showrunner Jon Favreau confirmed the series will debut in December 2021.

During The Mandalorian Season 2 finale episode post-credits scene, Boba Fett (Temuera Morrison) and Fennec Shand (Ming-Na Wen) unceremoniously killed Jabba’s former righthand man, Bib Fortuna (Michael Carter), and Fett took his throne. So, even if we don’t actually see Jabba again this December, he’s sure to cast a long, blob-like shadow over the events of The Book of Boba Fett.

The Book of Boba Fett will be one of at least 11 Star Wars series coming to the Disney+ streaming platform over the next few years.

We may even get to return to familiar locations like the Mos Eisley cantina — and you know what that means, the potential for a Han Solo cameo.

Are you excited to learn more about the Hutt organization and how Jabba the Hutt eventually came to be?