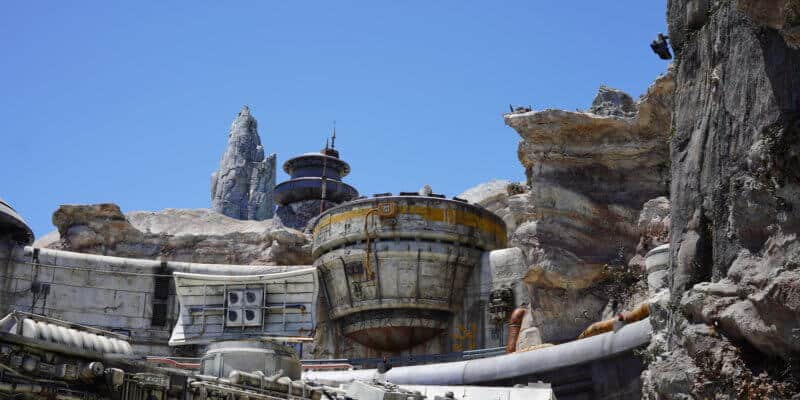 Galaxy’s Edge is here at last! Now you can live your Star Wars adventure at Disneyland. It is truly spectacular but we’re not here to talk about how great the land is. We are here to talk original Star Wars in Galaxy’s Edge. No matter where you stand with the prequel, or the sequel trilogy, I think we can agree the original three films are hands down the best. One thing that Disney likes to do is pay tribute to the past and they have done this inside Black Spire. A few rules before we start this list. You won’t see anything that is available for purchase, so no blue milk. It only refers to things that are a part of the land. So, let’s get started and see how Disney pays tribute to Star Wars original trilogy! 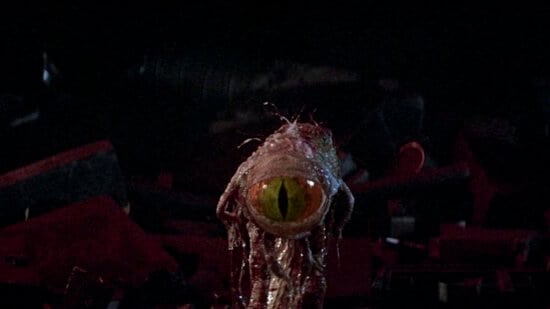 The Dianoga (aka the trash compactor monster) that is in “A New Hope” that takes Luke underwater and tries to drown him. This creature makes an appearance inside of Galaxy’s Edge in a water fountain.  The creature appears after you activate the water fountain near the restrooms in the bazaar. It doesn’t seem to work every single time you get water, but it worth hanging around for and seeing. It is a very cool and unexpected moment. 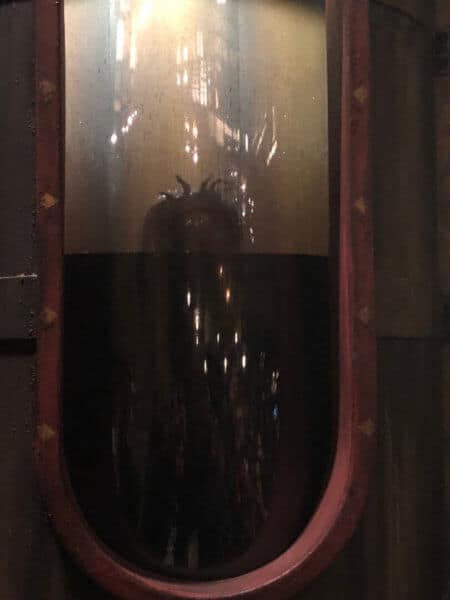 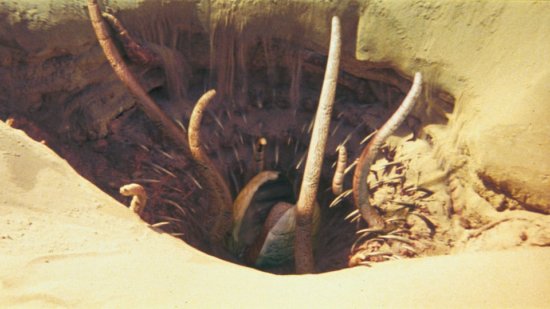 The Sarlacc is a creature that appears in “The Return of the Jedi”. Jaba was going to throw our heroes into the pit where they would be slowly digested over a period of a thousand years. Dok-Ondar’s Den of Antiquities is a gift shop that features a wide array of items and creatures for sale. One of these items brought to Dok-Ondar by Han Solo himself is a baby Sarlacc. It is near the register in a tube, and if you don’t know where to look you might miss it. 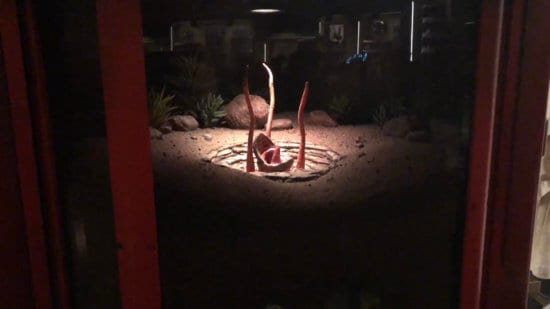 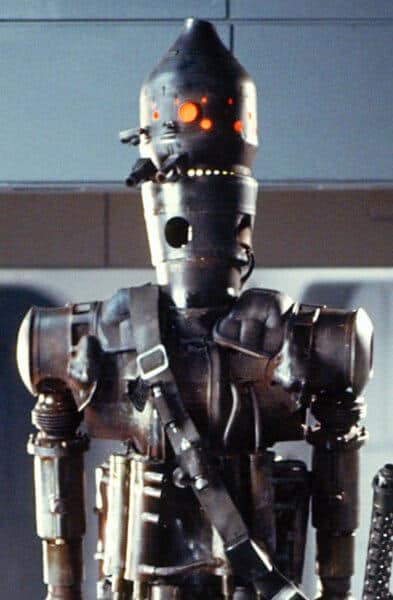 IG-88 is one of those background characters that has a cult-like following and he is personally my second favorite droid behind R5-D4. He was in one single scene in “The Empire Strikes Back”, but made a huge impression on the rest of Star Wars material. He was the antagonist in the book/video game Shadows of the Empire and is going to be seen in the upcoming show “The Mandalorian” coming to Disney+. Since he’s so popular it makes sense he would show up in Galaxy’s Edge, and he in fact does. Inside of Dok-Ondars, he is above the register and you can see his body stacked amongst other items inside the shop. A very cool reference inside a very cool place. 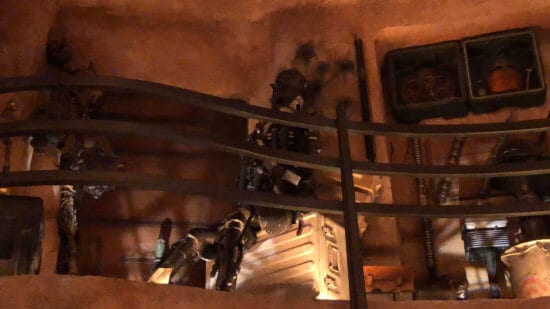 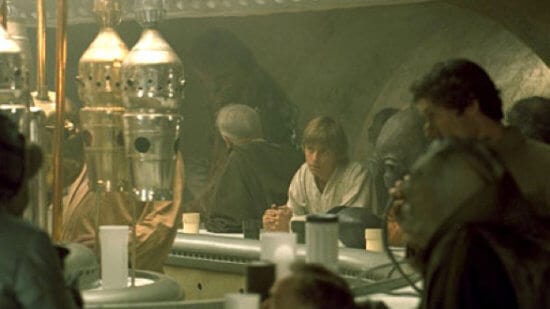 The Cantina Bar in Mos Eisley is one of the most iconic scenes in all of Star Wars. It wouldn’t be Star Wars without a cantina, and Disney delivered on those expectations, even to the smallest detail. In the original Star Wars films, there was a piece of bar equipment that looks strikingly similar to a character on this list. If you look into the background of the bar, you will see an object that looks like the head of IG-88. These were just decoration in the first film, and the idea got reused as a concept for the killer droid in the next film. But, they recreated this look inside Oga’s Cantina. 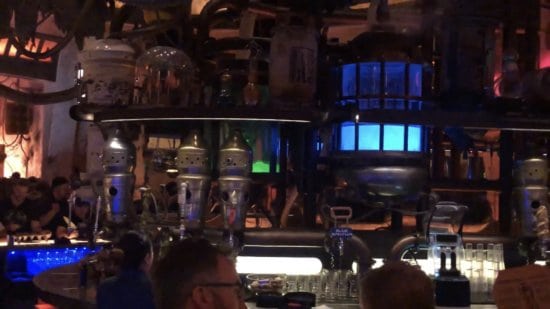 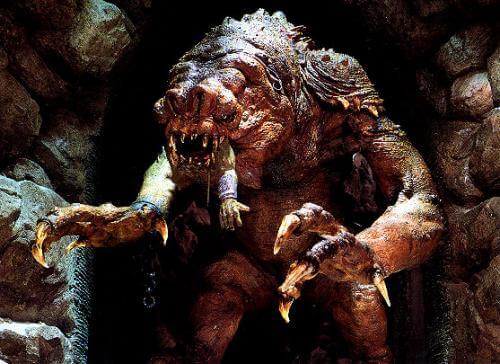 Let’s stay inside of Oga’s Cantina for the next reference and go to my favorite Star Wars film, “Return of the Jedi”. There is a creature we see at the beginning of the film called the Rancor. This creature is a pet of Jaba and he is a vicious monster who tries to eat our hero. There are two references to the Rancor inside of Galaxy’s Edge. First up, the teeth of the monster are used to serve beer when you order a beer flight. They look really cool (this one kind of breaks the rules because you CAN buy the glasses, but you don’t have to since they are served in this regardless)! 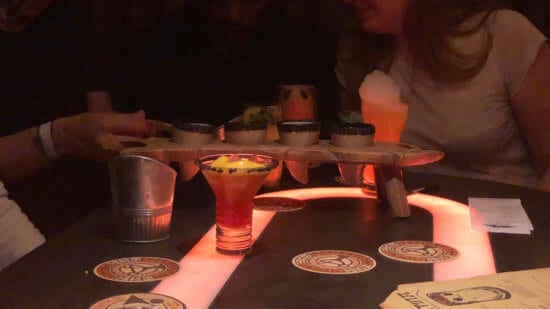 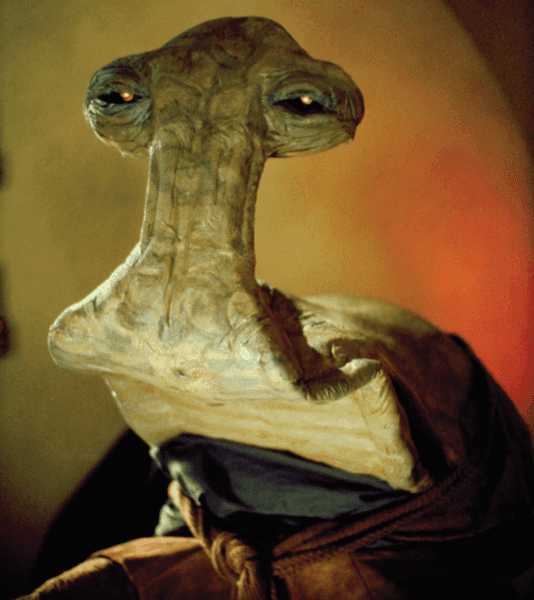 Dok-Ondar has been on this list quite a few times, and it is chock full of Easter eggs and Star Wars trilogy tribute. The man himself, Dok-Ondar is no exception. His race is called Ithorian and he is a collector who is known to be able to get his hands on just about anything you need. He is actually referenced in “Solo: A Star Wars Story” by Qi’ra. But, the race is a reference to the cantina scene also. He is commonly referred to by the fans as Hammerhead, but he does, in fact, have a name. His name is Momaw Nodan and he is awesome! This is probably why Dok-Ondar looks very familiar to you. 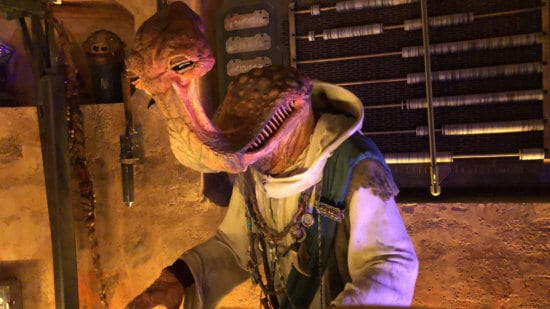 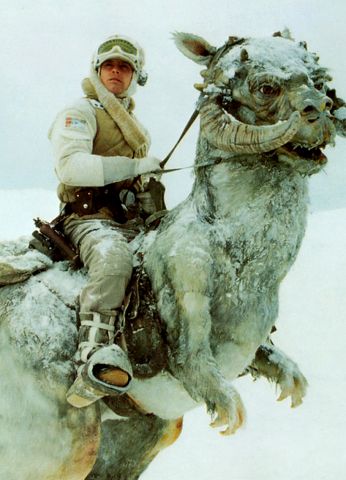 Staying inside Dok-Ondar for this last reference. We have something that I thought, smelled bad on the outside – the tauntaun. Seen in the “Empire Strikes Back” on Hoth, Han and Luke both rode these horse-ish creatures while they were making sure the Empire wasn’t on the tails of the Rebellion. You can see the head of one of these creatures on the wall inside Dok-Ondars’s, much in the way that hunters hang the heads of deer. 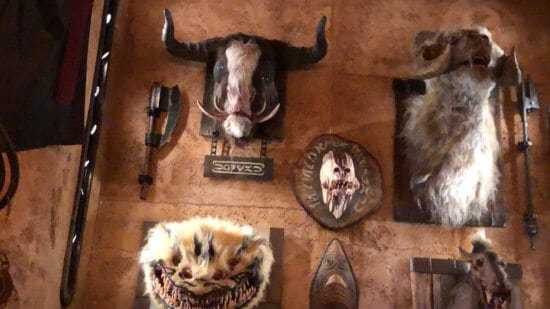 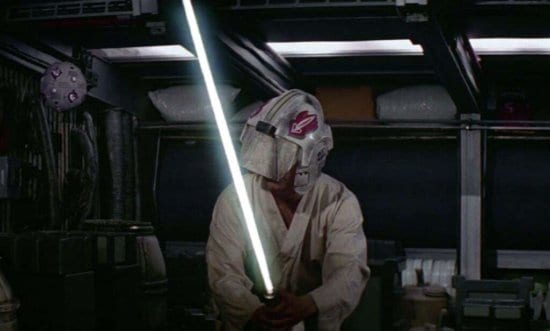 Millennium Falcon Smugglers Run is an amazing attraction that is fully immersive. Never before have you been able to step onto the Falcon and pilot this iconic ship. Stepping into the Dejarik room, (the holo-chess board) and feeling like you’re ON the Falcon, is next level. But, even here there are references to “A New Hope”. Right above the Dejarik table, there is Luke’s training orb and helmet that he used in the film. And, it’s right where you can touch it if you wanted to! It is a small touch that makes sense to the story they are telling. 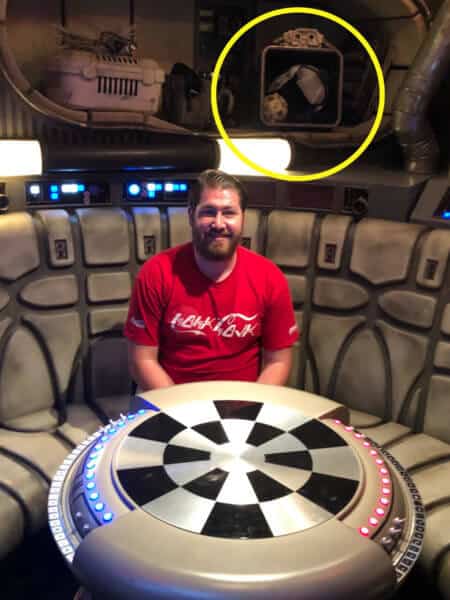 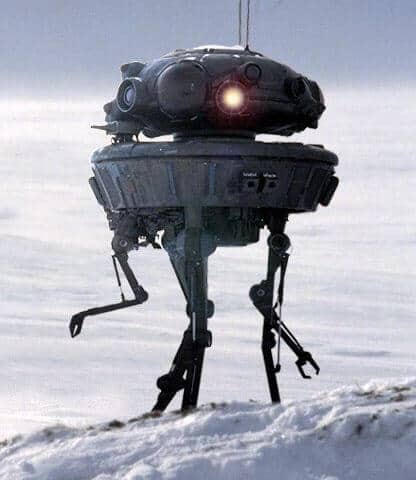 Imperial Probe Droids are used by the empire in “The Empire Strikes Back” as a form of surveillance on Hoth. They are iconic in Star Wars not only for their look but also the sound they make. The one that is in Black Spire is located right around the corner from where blue and green milk is being sold. It is hanging on a wall and is broken in half. But, it looks awesome. 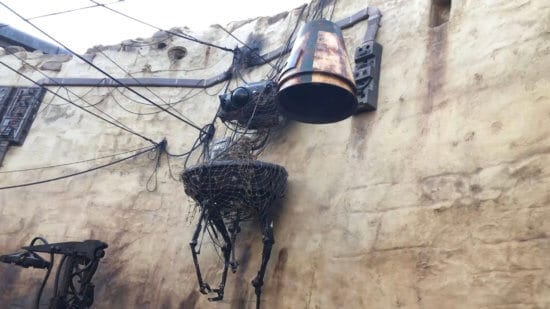 So, that’s my list. Was there any other Star Wars trilogy tribute that you noticed in the land that I missed? Please leave a comment and share your findings! Thanks for reading.