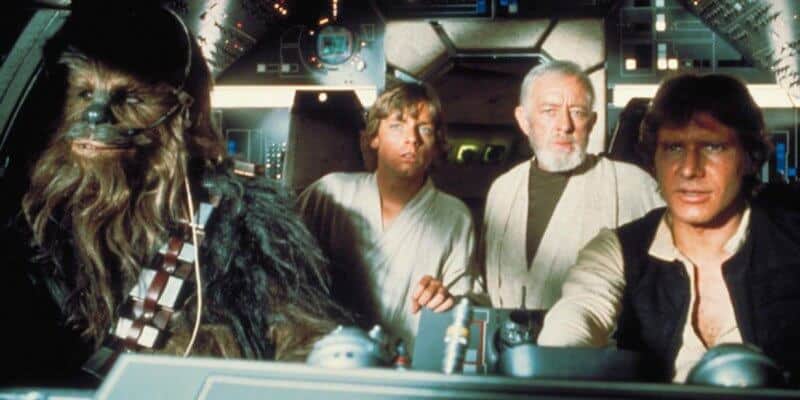 It’s hard to believe that it has been almost six years since The Walt Disney Company and Lucasfilm debuted the first feature film in their Star Wars sequel trilogy. Star Wars: Episode VII – The Force Awakens (2015) came out with the eyes of the world watching. Picking up many years after the events of Star Wars: Episode VI – Return of the Jedi (1983), the space opera franchise continued its Skywalker Saga and introduced new characters into the universe. Fans saw the arrival of heroes like Rey (Daisy Ridley), Finn (John Boyega) and pilot, Poe Dameron (Oscar Isaac), as well as interesting new villains like Kylo Ren (Adam Driver) and General Hux (Domhnall Gleeson).

2014 saw the world introduced to this new ensemble of Star Wars characters. With this digital age we live in, where news travels fast and the internet is aflame with fan reactions, theories, and criticisms almost instantly, back in the mid-70s casting news found its home on the pages of magazines like Variety and the LA Times. Yes, the original three Star Wars leads — Mark Hamill (Luke Skywalker), Harrison Ford (Han Solo) and Carrie Fisher (Princess Leia Organa) — reprised their roles in the sequel trilogy, much to the delight of fans, but their casting announcements for George Lucas’ original movie in 1977 came with much less fanfare.

Here we take a look at the original casting announcements for Star Wars.

Let’s go back in time…

What was Star Wars originally called?

Star Wars is announced, although under a different name.

This announcement from Box Office Magazine in July 1975 stated that The Star Wars would begin production in January 1976, going on to state December 1976 would be the space epic’s release date. The movie would go on to be called Star Wars and be released in a small number of theaters in the United States in May 1977, before gaining massive steam and a much wider release. Note too, the name of the hero — Luke Starkiller — but, more on that later.

A further update from Box Office in 1976 showed its final title of Star Wars before going on to give a synopsis of the upcoming movie, including “battle[s] with villains and strange creatures in a massive galactic civil war”. The production would begin shooting in March 1976 on location in Tunisia — which famously almost caused an actual war — with, rather surprisingly, only Alec Guinness (Obi-Wan / Ben Kenobi) attached in a “key” role. There is also no mention of the Empire’s space station base, the Death Star.

What role was Alec Guinness originally cast for?

While Guinness’s role has always been the same, it is in this original announcement abut the Doctor Zhivago (1965) actor that we see some interesting information.

This piece in Variety from March 1976 leads with the headline “Alec Guinness Lands Top Role in ‘Wars'”. As we know, Guinness’ Obi-Wan Kenobi was a short-lived highlight of the original movie, so this choice of “Top Role” is fascinating. The article even goes on to say that Guinness’s “major role” will be a “bearded old desert rat who was once a leading general in the galactic wars.” It’s thrilling to read these original statements knowing how far the franchise has come since its inception over four decades ago. Star Wars fans saw Obi-Wan’s Jedi “leading general” up close in the prequel trilogy which began in 1999 with Star Wars: Episode I – The Phantom Menace, and in much more detail in George Lucas’ and Dave Filoni’s animated series Star Wars: The Clone Wars.

Despite Guinness’s Academy Award nod for Best Supporting Actor — which to this day is Star Wars‘ only Oscars acting nomination –, it would be the “relatively unknown young performers” that would go on to change the galaxy forever.

Who was in the original Star Wars cast?

Now, they are household names but back in the mid-70s, the three that would be launched into the pop culture stratosphere were actually quite unknown.

This casting announcement from the Los Angeles Times in 1976 revealed that Mark Hamill had been signed by Star Wars producer Gary Kurtz to “make his feature picture acting debut in a starring role”. It would be Variety that provided more information on the relatively unknown Hamill.

The magazine also confirmed Hamill’s role in Lucas’ Star Wars — which shows the space opera’s budget of $8 million (today, that would be around $37 million) — as the lead character of Jedi Luke Starkiller. Most people will know that it was Luke Skywalker that became the hero of the Star Wars franchise, so why did his name get changed? In a book called “The Making of Star Wars: The Definitive Story Behind The Original Film” by J.W. Rinzler, it was confirmed that Lucas changed the name of the character due to its “unpleasant connotations” with the atrocities committed by Charles Manson. It’s hard to imagine the now mammoth Skywalker Saga could have been the Starkiller Saga…

In May of 1976, it would be revealed that two other up-and-comers, Harrison Ford and Carrie Fisher, would be starring in Star Wars. Ford had appeared in George Lucas’ and Francis Ford Coppola’s American Graffiti (1973) but it would take a planned encounter involving carpentry that would help Ford secure his role as the loveable fan-favorite space smuggler. Fisher’s acting career began on the stage, and even though her first feature film — Shampoo (1975) — came out before Star Wars, it would be her familial links to actress Debbie Reynolds and singer Eddie Fisher that would be the most newsworthy.

It was June 1976 that saw Star Wars unveil its casting for the main antagonists in the sci-fi movie. Peter Cushing joined as Grand Moff Tarkin, and more interestingly Dave Prowse’s role was revealed as a “huge masked villain.” Cushing’s Tarkin was more recently brought back into the Star Wars franchise via CGI technology in Rogue One: A Star Wars Story (2016) which also featured a young Carrie Fisher using the same techniques. We know that the “masked villain” would become the infamous pop culture icon, Darth Vader, whose history has been explored already within Lucasfilm’s prequel trilogy. Although, Star Wars will revisit Vader’s transition from Anakin Skywalker to Sith Lord in the upcoming Obi-Wan Kenobi Disney+ miniseries.

Reading these original casting announcements is like entering a time capsule to the era where the start of Star Wars original trilogy was just releasing. The movie that began as The Star Wars has gone on to dominate the pop culture landscape, cementing itself as one of the world’s biggest film franchises of all time, as well as spawning the iconic villain Darth Vader, and his even more iconic line in Star Wars: Episode V – The Empire Strikes Back (1980).

The journey continues after Lucasfilm President Kathleen Kennedy announced a mammoth slate of new Star Wars projects last year, including Ahsoka, The Bad Batch, and Andor. Star Wars fans can also look forward to the bounty hunter original series, The Mandalorian Season 3 and The Book of Boba Fett — which are both set in the same timeline — and the upcoming Lando miniseries, featuring another Star Wars original trilogy alum, Lando Calrissian.

What do you think of these original Star Wars casting announcements?