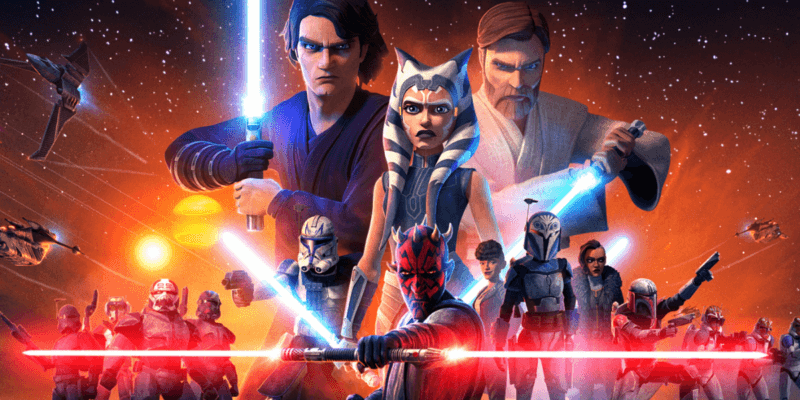 Easily one of the most popular Star Wars projects to date, Star Wars: The Clones Wars is a seven-season animated series documenting the three-year Clone Wars between the Galactic Republic and the Confederacy of Independent Systems.

Set in the Star Wars galaxy during the three years between the prequel trilogy films Episode II: Attack of the Clones (2002) and Episode III: Revenge of the Sith (2005), Star Wars: The Clone Wars gained a massive fan following and positive reception from critics during its tenure. The Clone Wars first appeared on cable TV and earned historical ratings and praise for its story, writing, characters, action, voice acting, music, and tone.

In its entirety, The Clone Wars is a behemoth of a series to grasp. Not to worry, we’ve comprised a handy guide to give the full rundown on one of the greatest adventures in this galaxy far, far away.

What is The Clone Wars?

Not to be confused with Star Wars: Episode II – Attack of the Clones (2002), Star Wars: The Clone Wars (2008-2020) is the first weekly TV series from Lucasfilm Animation that documents the adventures of Jedi Knight Anakin Skywalker, Jedi Master Obi-Wan Kenobi, Jedi Master Yoda, and Padawan Ahsoka Tano as they lead an army of clone troopers apart of the Galactic Republic against the evergrowing Separatist Alliance Army made up of battle droids led by former Jedi Count Dooku, General Grievous, and the Trade Federation.

It also introduced Clone Force 99 — the Bad Batch — who have their own animated series, Star Wars: The Bad Batch, with a premiere date of May 4, 2021.

The Clone Wars‘s popularity only grew as Star Wars fans got to know famous clones, like Captain Rex, Echo, Fives, and Heavy — on a personal level that was not present in any Star Wars movies. Becoming like family members, it hurt to see any of your clone brothers be lost in battle (this one’s for you, Fives).

The plot of The Clone Wars

Becoming one of the most popular Star Wars ventures amongst Star Wars fans, The Clone Wars animated series gives an in-depth look into the Grand Army of the Republic’s interworking led by some of the greatest Jedi Knights and Masters of the Jedi Council on Coruscant and throughout the galaxy.

The Clone Wars (22–19 BBY) was a major, three-year war between the Galactic Republic and the Confederacy of Independent Systems. The war was named after the army of clone troopers used by the Republic against the Confederacy’s battle droid army. With both being fielded in enormous numbers by each respective side, the Grand Army of the Republic and the Separatist Droid Army were two of the largest military forces in galactic history, and fighting between them swept through the galaxy upon the outbreak of war in 22 BBY.

Battles, skirmishes, raids and other actions continued for the next two years, with notable battles occurring on Ryloth, Felucia, Malastare, and Kamino. During this time, the Separatists developed various super weapons, including more traditional weapons such as the ion cannons of the battleship Malevolence…

Meanwhile, the Republic launched several key offensives, including the Second Battle of Geonosis, which obliterated Geonosis’ battle-droid foundries, and a failed Jedi-led operation to capture Supreme Commander of the Droid Army General Grievous at Saleucami. Amidst the escalating conflict, many planets—including Mandalore and other members of the Council of Neutral Systems—struggled to maintain their neutrality, but found it difficult to escape the carnage.

However, cracks in the Jedi Council and the Galactic Republic began to form as the Clone Wars wanned. Believing the end was in sight, the Grand Army of the Republic and Jedi’s Kenobi, Skywalker, Tano, Jedi Master Mace Windu (Terrence Carson), and Yoda blindly press forward.

Characters and voice actors in Star Wars: The Clone Wars

In Lucasfilm’s animated series, Jedi Knight Anakin Skywalker (Matt Lanter) grows ever more powerful as he trains under the wing of Jedi Knight Obi-Wan Kenobi (James Arnold Taylor). Sensing disquieting disturbances in the Force regarding Anakin Skywalker, Yoda (Tom Kane) fears a grave tragedy for young Skywalker. However, he generally keeps these premonitions to himself and allows the young Jedi — believed to be The Chosen One — to grow stronger in the Force with each new fight.

Fighting the unwavering droid army on numerous planets scattered throughout the galaxy in nearly one of the Star Wars episodes, this clone war was not the only war Anakin was fighting in. Unbeknownst to his closest allies, Senator Padmé Amadala (Catherine Taber) and Anakin Skywalker pursued a secret and prohibited relationship. The Jedi Council barred any Jedi from engaging in a physical relationship with another being.

The rule breaker he was, Anakin formed a nearly unbreakable friendship and alliance with his Padawan, Ahsoka Tano (Ashley Eckstein). The two went about learning the Force and defeating foes in ways that were deemed unconventional to the Jedi Council. Still, Anakin’s influence over Ahsoka’s training in the Force undoubtedly made her a mighty, level-minded Jedi.

A new threat rises. Rogue Sith Lord Darth Maul (Sam Witwer), an old foe of Kenobi thought to be dead, awakens and strives to exact revenge on Obi-Wan Kenobi after a near-fatal event Star Wars: Episode I – The Phantom Menace (1999) that cost Maul his legs.

Maul’s previous master, Darth Sidious — still disguised as Chancellor Palpatine of the Galactic Republic — finds a new apprentice in Count Dooku (Corey Burton), a former Jedi Master who betrayed the Order to become a Sith Lord during the early stages in galactic conquest.

Despite the betrayal of his Master, Maul still believed that he was a Sith Lord and could regain the respect of Darth Sidious. Taking his brother, the Nightbrother Savage Opress (Clancy Brown), as his apprentice and devising a plan to seize control of the planet Mandalore to gain a foothold in the Clone Wars.

By the seventh and final season of The Clone Wars, Anakin Skywalker’s powers grow out of hand, and his unwavering loyalty to the Jedi Council and light side of the Force falters. Unlikely, alliances form between Ahsoka Tano and Bo-Katan Kryze (Katee Sackhoff), leader of the Mandalorian Nite Owls and a lieutenant in Death Watch, reclaim Mandalore from Maul. At the same time, Anakin hands his allegiance to Chancellor Palpatine.

How The Clone Wars fits into the Star Wars universe

Much like another animated show, Star Wars Rebels, the animated series is somewhat of a bridge between Star Wars stories in the Skywalker saga that gives fans a clearer look into the behind-the-scenes events that greatly impacted stories and characters in the future Star Wars movies. However, these shows are not treated as meager “sequels” to movies like Revenge of the Sith or Return of the Jedi. In fact, they should be regarded as higher than some of the films for their storytelling and influence over the Star Wars saga.

The structure of The Clone Wars is not chronological but an anthology of the Clone Wars itself. While the series starts at point “A” and essentially ends at a point “B,” each Clone Wars season tells a new story that fits in the Star Wars timeline between Attack of the Clones and Revenge of the Sith, but the content presented portrays important and essential, multi-episode story arcs that form a broader story sometimes told in a non-linear format.

What are the best story arcs in The Clone Wars?

While choosing your favorite story arcs in The Clone Wars is a touchy and difficult subject to discuss, Star Wars fans generally love the “Darkness of Umbara” (clones being humanized), “Mortis” (in-depth explanations of the Force), and “Siege of Mandalore” (Star Wars interconnected at its finest) arcs the most — there are, of course, exceptions to every rule, but these are typically popular plot lines.

The “Lawless” arc — wherein Duchess Satine Kryze (Anna Graves) is rescued by her nephew Korkie and a group of Death Watch dissidents led by her sister, Bo-Katan Kryze (Katee Sackhoff) — is an honorable mention. This story is especially poignant due to Obi-Wan Kenobi’s heartbreaking loss of his lover, Duchess Satine, at the hands of Darth Maul.

And, you can’t forget the “Legendary Droid” arc! Its legacy has spawned an animated series coming to Disney+, centered around those lovable droids, and we can’t wait to see how Lucasfilm knocks it out of the park with that show.

What’s next for The Clone Wars?

Lucasfilm’s The Bad Batch takes place directly after the events in season seven of The Clone Wars. As previously mentioned, Clone Force 99’s Clone Troopers first appeared in The Clone Wars and proved to be an essential band of fighters for the Grand Army of the Galactic Republic.

You can watch the official trailer for The Bad Batch below:

According to Wookieepedia, the Bad Batch consists of “Sergeant Hunter, the team’s leader; Wrecker, the squad’s brash strongman and assault specialist; Crosshair, the team’s grim, sarcastic sniper; and Tech, the hyper-intelligent and knowledgeable tech specialist.”

The series will also feature Echo, an ARC trooper and Hero of Anaxes who was believed to be dead in The Clone Wars — he is the newest recruit to the Bad Batch.

The series tackles the downfall of the Galactic Republic, the emergence of the First Galactic Empire from its ashes, and the execution of the Jedi due to Order 66. These special troopers are now an enemy of the state and must battle off new foes, including old clone troopers, as they find their way in a changed galaxy in the aftermath of the Clone Wars.

Being able to see the Star Wars galaxy in an in-depth, refreshing way fueled the show’s popularity until its untimely and abrupt ending in 2013.

Announcing that Lucasfilm Animation was “winding down” the production of the animated series, the crew revealed they finished the active production on new episodes. This blunt ending of The Clone Wars that left a reported 13 story arcs unfinished sprouted from The Walt Disney Company’s acquisition of Lucasfilm, forcing the hit show to leave Cartoon Network — a top competitor to the Disney Channel.

Seven years later, and the seventh and final season of The Clone Wars premiered on Disney+. The original cast and crew, including Dave Filoni, Ashley Eckstein, Tom Kane, and Dee Bradley Baker (voice actor for all of the Clone Troopers), returned to end this historic show rightfully.

Are you a fan of The Clone Wars? Let us know in the comments below!

Comments Off on Your Guide to ‘Star Wars: The Clone Wars’