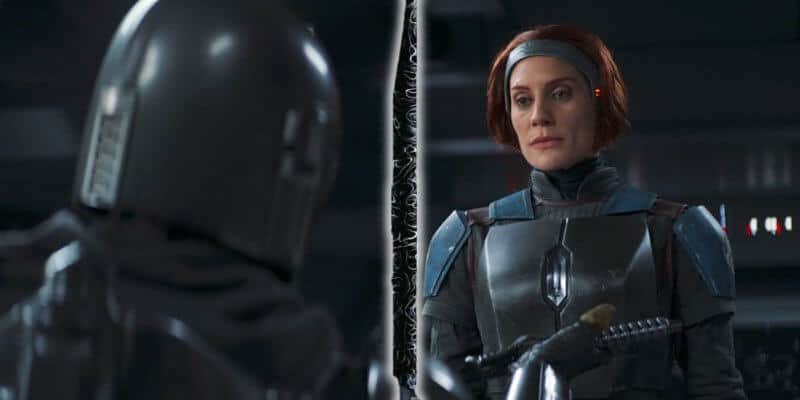 Then, Sackhoff got the chance to make her live-action debut as Bo-Katan in The Mandalorian Season 2. She first appeared in Bryce Dallas Howard-directed “Chapter 11: The Heiress,” then showed up again in the season finale episode, “Chapter 16: The Rescue.”

Previously, the actress spoke about how incredible it was to play a live-action Bo-Katan in the Star Wars galaxy — and how shocked she was that Mandalorian creator Jon Favreau and executive producer Dave Filoni gave her the opportunity.

In January, Sackhoff told Inside of You podcast host Michael Rosenbaum:

“It was this moment where I was always just joking and when I phone call came in that Jon Favreau wanted to sit down with me, I almost had a heart attack. It took me halfway through that meeting that he was actually talking about me doing Bo-Katan…I remember sitting across from him, just this total out-of-body experience…thinking, ‘Oh, those are pictures of me on the wall’…what is happening?

I still to this day, I’m still pinching myself. My mind is blown…they believed that I could and they ultimately let me.”

Now, Sackhoff has spoken to Looper and confirmed that there’s a still lot more of Bo-Katan’s story to tell — Star Wars fans haven’t seen the last of the Mandalore heiress and her Nite Owl warriors — Axe Woves (Simon Kassianides) and Koska Reeves (Sasha Banks) — in The Mandalorian saga.

Speaking about what’s next for the live-action version of Bo-Katan Kryze, Sackhoff said:

“…I think that she is a warrior at heart. That’s who she is. That’s who she’s always been, and we haven’t seen that part of her yet. I want to see why she thinks she’s the right ruler, and how far she’ll go, and what that looks like.

Just because you think you’re right and just because you think you’re the right person to rule, that doesn’t mean you actually are. So I want to see that struggle because if she really does care about her people, she may not be the right person. I think there are so many different places to go, so we’ll have to see what those guys [Favreau and Filoni] have in their minds.”

In the same interview, Sackhoff gushed about working with Din Djarin actor Pedro Pascal. She shared:

“If he were to show up and not give you a performance inside the helmet, you’d be like, “Well, that didn’t work.” Because when he is there, it changes the performances around him exponentially because he knows the character so well. He’s just such a good actor.

At this time, Pascal is the only actor confirmed for The Mandalorian Season 3. However, given what we know about Mandalorian spinoffs Ahsoka, Rangers of the New Republic, and The Book of Boba Fett, it seems likely that Bo-Katan’s story will continue in the third season of the hit Disney+ series.

The Mandalorian Season 2 ended with Djarin winning the Darksaber in battle with Moff Gideon (Giancarlo Esposito) in a bid to save Grogu.

Now that “Baby Yoda” has gone on to complete his Jedi training with Luke Skywalker (Mark Hamill), it seems likely that the Darksaber storyline will continue into the third season — and that Djarin may eventually become the leader of New Mandalore as Bo-Katan comes to grips with who she is.

However, as Sackhoff herself said, only time will tell exactly what Favreau and Filoni have in mind for their little corner of the Star Wars universe. The news that Bo-Katan’s story isn’t over, however, should certainly excite the Star Wars fan base.

Related: ‘Mandalorian’ Star Wonders If Supporting Gina Carano Will Get Him Fired

What do you want to happen next for Bo-Katan Kryze?

Comments Off on Katee Sackhoff Confirms Bo-Katan Kryze Will Return