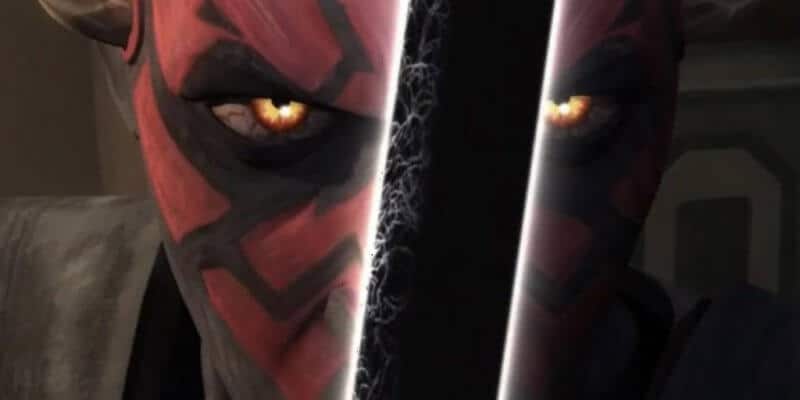 Whether you’re a longtime Star Wars fan who was introduced to the Darksaber years ago in animated series Star Wars: The Clone Wars and Star Wars Rebels, or you were more recently introduced to the black-bladed saber in The Mandalorian, you know this lightsaber is immensely important within the Star Wars universe.

Origin of the Darksaber

The Darksaber was created during the by Tarre Vizsla, the first Mandalorian to join the Jedi Order. Vizsla crafted the saber during the Old Republic era, sometime prior to 1032 BBY in the Star Wars timeline. House Vizsla was a powerful Mandalorian clan and this ancient Mandalorian weapon was kept, for a time, in the Jedi Temple following Tarre Vizsla’s death.

Ultimately, however, according to Star Wars lore, members of House Vizsla stole the Darksaber back and it was passed through the generations until it fell into the hands of Pre Vizsla, who kept the weapon even after the New Mandalorians’ pacifist ideals replaced Mandalore’s traditional warrior culture.

Wookieepedia explains how Pre Vizsla ultimately used this saber malevolently, and how the weapon ended up in the hands of Maul, a storyline with which Clone Wars fans will be familiar:

“He used the blade during his conflicts with the New Mandalorians, including his successful takeover of Mandalore. After the coup, renegade Sith Lord Maul killed Vizsla in a duel and took the Darksaber as his own, becoming the leader of Death Watch. However, Maul’s old master, Darth Sidious, soon arrived on Mandalore to confront his former apprentice. Maul used the Darksaber to fight him but was ultimately bested in combat, taken prisoner and held at a Separatist prison, the Spire, on Stygeon Prime.

Maul was soon rescued from the Spire at the behest of Prime Minister Almec, whom Maul had chosen as the public leader of Mandalore. After being freed, Maul returned to Zanbar, the location of a Death Watch camp, and was given back the Darksaber, which had been recovered from the Sundari Royal Palace, the site of Maul’s duel with Sidious.”

This origin story brings us to another key topic regarding the Darksaber — which Star Wars characters have been in possession of the deadly Mandalorian creation throughout Star Wars history?

Who Wields the Darksaber?

As we just learned, the Darksaber has had its fair share of owners throughout its lengthy existence — Tarre Vizsla, Pre Vizsla, and Maul, just to name a few.

Following Maul’s death, Star Wars Rebels viewers saw Sabine Wren found the saber in his possessions in the Nightsister lair on his home world of Dathomir.

Following the wishes of Mandalorian Protector Fenn Rau, Jedi Knight Kanan Jarrus was ultimately tasked with training Wren in the use of the special lightsaber.

Per Wookieepedia, what happened next in the Darksaber’s long history brings us nearly to the present moment in the Star Wars saga:

“After rescuing her father from Imperial custody and destroying the superweapon she had built while an Imperial cadet, Sabine offered the Darksaber over to Lady Bo-Katan Kryze, the sister of the former Duchess, whom she deemed to be the rightful person to lead the Mandalorians against the Empire. Bo-Katan was reluctant to accept the mantle of leader, but with the support of the other clans, agreed and accepted the Darksaber.

After the Great Purge, the Empire desecrated Mandalore and Bo-Katan lost possession of the Darksaber. She fled the planet, but continued to lead the Nite Owls and was intent on eventually reclaiming the Darksaber and Mandalore.”

In The Mandalorian, of course, fans were first introduced to the Darksaber when Moff Gideon (Giancarlo Esposito) wielded it in the Taika Waititi-directed Season 1 finale episode.

The black-bladed saber reappeared in Season 2, when Bo-Katan Kryze (Katee Sackhoff) made her live-action debut, ultimately teaming-up with titular bounty hunter Din Djarin (Pedro Pascal) to rescue Grogu from the clutches of Gideon and his Dark Trooper squadron.

During the aforementioned Season 2 finale, Gideon and Djarin had an epic Darksaber vs. beskar spear showdown that ended with Djarin rightfully earning the Darksaber — and, unsurprisingly, Bo-Katan’s ire. Now, moving into Season 3, fans can anticipate that the weapon will continue to play a major role in Jon Favreau and Dave Filoni’s Mandalorian saga moving forward.

The Darksaber is not distinctly different in functionality than other standard lightsabers throughout the Star Wars galaxy. It can, however, cause whoever wields it to get more in-tune with whatever dark side tendencies they may possess.

Furthermore, the design of the saber is unique. As Wookieepedia notes:

“It had a unique blade that was shorter than that of most lightsabers, and shaped like a traditional sword. Its overall profile was distinctly Mandalorian with an angular pommel, hand guard, and slit-shaped blade emitter. The sound emitted by its blade was also higher pitched than other lightsabers. The Darksaber had a crystal which served as a conduit for Force energy. The wielder’s thoughts and actions guided the blade’s current of power, with the blade often producing an electrical effect in response to a heightened emotional state. The Darksaber was also capable of parrying a blow from a lightsaber, with the blades being drawn to each other in an almost magnetic pull. Like other typical lightsabers, the darksaber could not cut through beskar.”

Perhaps, though, the most significant aspect of the Darksaber is that whoever wields it legitimately is the de facto ruler of Mandalore. This is why Bo-Katan so desperately wants to earn the weapon — and why it is likely to continue playing a part in The Mandalorian as Djarin’s galactic adventures continue.

Where to Get Darksaber Toys

As the Darksaber has become increasingly popular among Star Wars fans, the demand for Darksaber toys has grown. Young Mandalorian fans want to play with the toy lightsaber as they role play Djarin’s story in their own living rooms and backyards.

Fortunately, there are several Darksaber toy options available for all those fans who want to complete their Mandalorian armor costumes with the perfect accessory.

The description of this Hasbro Darksaber reads, in part:

“In the Star Wars saga, this one-of-a-kind black-bladed Lightsaber has been a symbol of Mandalorian power for generations.

Fans can also look out for other Star Wars roleplay items, including Lightsabers and masks inspired by characters from the Star Wars movies. (Each sold separately. Subject to availability.)

May the Force be with you!”

The description of the Star Wars The Black Series Darksaber reads:

The most realistic FX lightsaber yet!

Hasbro’s Star Wars The Black Series Force FX Elite Darksaber features an upgraded blade form factor and innovative technology that recreates the cool features of this particularly unique lightsaber with an accelerometer that tracks its speed to match the sound effects to actual movement! Screen-accurate sounds, ignition, localized clash, blaster, and wall-cutting FX, plus a removable blade, make this the most realistic FX Lightsaber yet! Also includes a display stand and battery that recharges via USB.

Experience the evolution of Star Wars The Black Series Force FX Elite with the first-ever The Mandalorian Darksaber prop replica! Now you too can join the likes of Pre Vizsla, Bo-Katan Kryze, Sabine Wren, Moff Gideon – and Mando – as one of the fortunate people to hold this powerful weapon.”

How do you think the Darksaber’s story will evolve as the Star Wars saga moves forward and Mandalorian culture continues to be explored?

Comments Off on Breaking Down the Darksaber