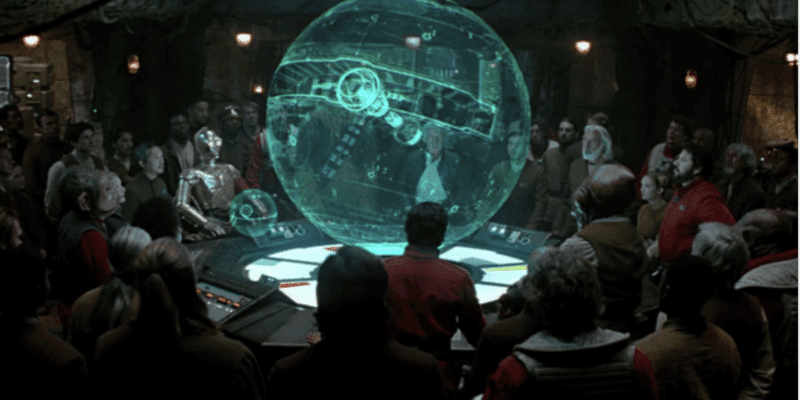 The Battle of Yavin, as most Star Wars fans undoubtedly know, is the climax of Star Wars: Episode IV – A New Hope (1977). After the battle is over and the first Death Star has been destroyed, the Skywalker Saga original trilogy’s unlikely band of heroes — including Millennium Falcon pilot Han Solo (Harrison Ford) and young Jedi Knight Luke Skywalker (Mark Hamill) — are granted medals in a now-iconic scene.

No, we still don’t have a definitive answer for why Chewbacca (Peter Mayhew) didn’t receive a medal, too.

All that to say, ABY and BBY have, for the most part, been helpful in understanding the Star Wars timeline. The Battle of Yavin was a major galactic event and using it as the anchor point for all the canonical events in the Star Wars universe has been, at the very least, a functional system.

For instance, Padme Amidala (Natalie Portman) gave birth to twins Luke Skywalker and Leia Organa (Carrie Fisher) in 19 BBY, during Star Wars: Episode III – Revenge of the Sith (2005). Luke passed away on Ahch-To in 34 ABY in Star Wars: Episode VIII – The Last Jedi (2017) and Leia tragically sacrificed herself in 35 ABY on Ajan Kloss.

It is worth noting that the Star Wars Expanded Universe/Star Wars Legends is not part of the existing canon.

Recently, however, as the Star Wars story has begun to expand at a record pace — there are three Star Wars movies and 11 Disney+ streaming series planned for the next few years alone — this dating system has become confusing, particularly for newer fans who have only become interested in Star Wars due to the popularity of The Mandalorian or who, perhaps, found themselves enamored of the Star Wars: The High Republic publishing initiative without much background.

For those wondering, Din Djarin (Pedro Pascal) and Grogu’s (AKA Baby Yoda) adventures in The Mandalorian Season 1 occur around 9 ABY, five years after the events of Star Wars: Episode VI – Return of the Jedi (1983) and about 25 years prior to Star Wars: Episode VII – The Force Awakens (2015).

The High Republic era, on the other hand, takes place much earlier between 300 BBY and 82 BBY, approximately 200 years before the prequel trilogy begins with Star Wars: Episode I – The Phantom Menace (1999).

The new eras are the High Republic, the Fall of the Jedi, the Reign of the Empire, the Age of Rebellion, the New Republic, and the Rise of the First Order.

Before this updated Star Wars chronology was released, however, Lucasfilm had already tried to fix the timeline. CBR explained:

After all, most calendars, fictional and not, do not reset after a significant historical event such as a battle… [Star Wars has tried to] rectify this issue by redefining its eras and using the Starkiller Base’s strike on the Hosnian system from The Force Awakens as a new anchor point.

In addition to being yet another designation for the Star Wars fan base to keep track of, this is only a slight shift from the BBY and ABY dates. Instead of focusing on a single battle, BSW4 and ASW4 encompass the entirety of A New Hope. In reality, this almost makes things more confusing for those who don’t know every detail of the timeline.

Where does this leave Star Wars fans and creative teams?

For some unknown reason, Lucasfilm — and presumably Star Wars creator George Lucas himself — has perpetually balked at developing an in-universe calendar.

Star Trek, Battlestar Galactica, and a number of other science fiction and fantasy franchises use in-universe timelines, so there really isn’t much of a precedent for this in popular culture.

At this juncture, we are left with three dating systems — BBY/ABY, BSI/ASI, and BSW4/ASW4 — and a graphical timeline to contend with.

Seemingly, the best way to fix the problem is for Lucasfilm to put together an in-universe timeline that will fix the confusion once and for all moving forward. For a franchise that relies so heavily on important events — like the destruction of both Death Stars and various battles — it is becoming increasingly strange that none of these things occurred in a specific in-universe year.

Within the next few years, for instance, Disney+ subscribers will follow bounty hunter Boba Fett (Temuera Morrison) and Jedi Ahsoka Tano (Rosario Dawson) in two Mandalorian spinoff series — The Book of Boba Fett and Ahsoka, respectively — and, in all likelihood, witness the rise of Darth Sidious’s/Emperor Palpatine’s Master, Darth Plagueis, in The Acolyte.

These shows will take place in vastly different eras of the Star Wars saga and they are just the tip of the iceberg in regard to upcoming content.

As we continue to explore new stories within a galaxy far, far away — and perhaps add even more ages, like the Old Republic — it is only going to get more complicated to keep track of dates and events without a clear and defined calendar to follow.

What do you think about the complexities of the current Star Wars dating systems?