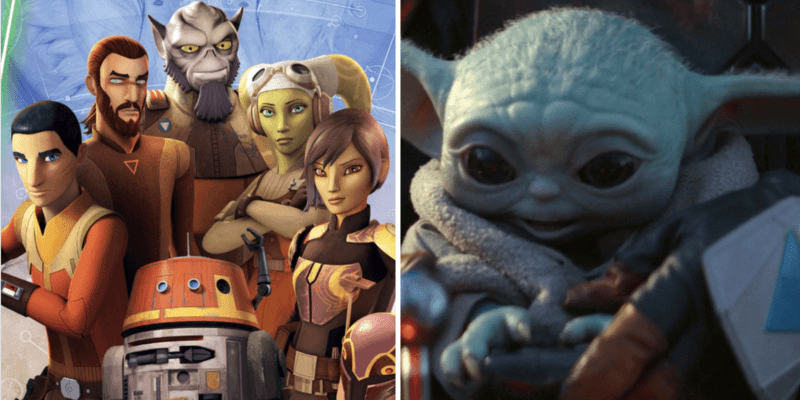 While most Star Wars fans have a fairly solid grasp of where The Mandalorian falls in the overall Star Wars timeline, its relationship to the storyline of the animated series, Star Wars Rebels, has always been a bit murky.

The Mandalorian is set in 9 ABY, approximately five years after the Empire was defeated in Star Wars: Episode VI – The Return of the Jedi (1983) – hence Jedi Knight Luke Skywalker‘s young appearance during Mark Hamill’s Season 2 finale cameo. This places it just about 25 years prior to the first sequel trilogy film, Star Wars: Episode VII – The Force Awakens (2015).

The closest we’ve come to getting a straight answer about the Mandalorian and Rebels timeline, however, came from Dave Filoni himself in a 2020 interview and was ambiguous, to say the least:

“[It’s] not necessarily chronological,” explains Filoni, referring to the open-ended final scene of Rebels, which saw Ahsoka set off in search of Ezra Bridger and the villainous Grand Admiral Thrawn, who she mentions she’s still looking for in this most recent Mandalorian episode.

“So in the vein of that history, when you look at the epilogue of Rebels you don’t really know how much time has passed. So, it’s possible that the story I’m telling in The Mandalorian actually takes place prior to that. Possible. I’m saying it’s possible.”

At the time of the interview, just after Ahsoka Tano (Rosario Dawson) made her live-action debut in The Mandalorian Season 2, Episode 5 (“Chapter 13: The Jedi”), most fans took this to mean that Rebels and The Mandalorian did intersect at some point.

Now, however, closer inspection of a major event in Mandalore’s history may change that assumption.

The Importance of the Darksaber

By the time The Mandalorian picks up, however, there are seemingly very few Mandalorians. This appears to be particularly true in the Outer Rim territories where bounty hunter Din Djarin (Pedro Pascal) operates — he and his beskar armor are something of a novelty everywhere he goes.

In Kryze’s live-action debut in The Mandalorian Season 2, Episode 3 (“Chapter 11: The Heiress”), it was confirmed that the warrior’s sole goal was to retake Mandalore, unit its clans, and avenge the death of her sister Duchess Satine Kryze.

ScreenRant shared details about how Kryze lost the Darksaber prior to the start of The Mandalorian:

Before the Great Purge, resistance to Imperial occupation was constant on Mandalore, with Bo-Katan rallying her people against the invaders. The Empire soon realized that they would never be able to fully control the planet, and resolved to squash the freedom fighters for good. While Kryze and her allies attempted to fight back, the Imperial forces were simply too strong, and nearly all of the Mandalorians perished. The planet was looted for Beskar, a super-strong alloy used to make the Mandalorians’ near-indestructible armor. Amidst the genocide, Moff Gideon (Giancarlo Esposito) took the Darksaber from Bo-Katan, stripping her of her power once again.

Since Pedro Pascal previously confirmed that, “We start very directly [in The Mandalorian Season 2] after the first [season],” and we know that Moff Gideon was already in possession of the Darksaber during the Season 1 finale episode (“Chapter 8: Redemption”) — and likely had it throughout the season — it can be safely presumed that Rebels ended before The Mandalorian.

Now, as Jon Favreau and Dave Filoni’s Mandalorian saga moves forward, there are reports that spinoff series, Ahsoka, is set to function as a Rebels sequel.

It is expected that the show will follow fan-favorite Rebels and Star Wars: The Clone Wars character, Ahsoka Tano (Rosario Dawson), in her search for Grand Admiral Thrawn and Ezra Bridger.

Other Rebels characters, such as Sabine Wren and even Ghost Captain Hera Syndulla (Vanessa Marshall), have been rumored to make live-action debuts moving forward as well. This has not been confirmed by Disney or Lucasfilm at this time.

What’s Next For The Mandalorian Franchise?

At this time, The Mandalorian Season 3 and two of its spinoffs — Ahsoka and Rangers of the New Republic — do not have official release dates. They do not appear on Disney’s 2021 release schedule and are expected sometime in 2022.

A third spinoff, The Book of Boba Fett, has been confirmed for a December 2021 debut. Showrunner Jon Favreau confirmed that this is the official “next chapter” in The Mandalorian saga.

This has led to rumors that we could see a Han Solo (Harrison Ford) appearance using the same CGI technology that was used to de-age Luke Skywalker (Mark Hamill) in the second season of The Mandalorian and Carrie Fisher (Princess Leia) in Rogue One: A Star Wars Story.

Do you hope to see Star Wars series like Rebels and Mandalorian continue to intersect with the Star Wars universe?