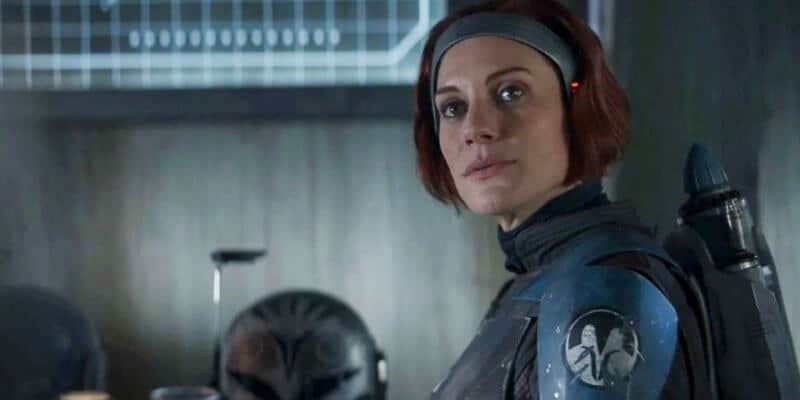 Actress Katee Sackhoff, perhaps best known as Kara ‘Starbuck’ Thrace from Battlestar Galactica, voiced Bo-Katan and was ecstatic to get the opportunity to play the Mandalorian warrior in live-action, too.

Bo-Katan was featured in two episodes of The Mandalorian Season 2. She appeared in both “Chapter 11: The Heiress,” directed by Bryce Dallas Howard, and the season finale episode, “Chapter 16: The Rescue.” She was accompanied by two of her Nite Owl warriors, Koska Reeves (Mercedes Varnado/Sasha Banks) and Axe Woves (Simon Kassianides).

Previously, Sackhoff shared with the Inside of You podcast:

“But when Mandalorian came out and I saw him [Mandalorian executive producer Dave Filoni, who also worked on Rebels and Clone Wars] at Celebration, I made a joke about Bo-Katan, ya know, wink wink, nudge, nudge. I’ve been playing characters like this for 15 years, buddy…I never really thought it would happen. I was just sort of joking.”

Now, Sackhoff has opened up to Polygon about Bo-Katan’s somewhat ambiguous status within the Star Wars universe. It’s never easy to tell if she can be trusted or not and, according to Sackhoff, that’s kind of the point.

“For anyone who hasn’t seen Clone Wars, Bo-Katan didn’t necessarily start out on the right side of things,” Sackhoff tells Polygon, during a weekend appearance with Topps Digital at Wintercon in New York. “She thought that she was, but she is not completely good in this story, and she has had some some nefarious intentions, potentially, at one point. What I loved about the way that she was portrayed in [The Mandalorian] was that you don’t really know what she’s thinking, or where she lands, or if you’re supposed to like her or trust her.”

“At the end of season 2, we are in a position where we’ve set ourselves up with our hero to potentially be in conflict,” Sackhoff continues. “You don’t quite know if you’re supposed to root for her or not yet, and I love that. I love that gray area, because she’s not so black and white.”

Although Sackhoff has not been officially confirmed for The Mandalorian Season 3 at this point, it seems unlikely that the series will continue without her. The Darksaber storyline remains unresolved after title character, Din Djarin (Pedro Pascal) won the black-bladed weapon in battle with Moff Gideon (Giancarlo Esposito).

Furthermore, with Grogu (AKA Baby Yoda) currently finishing his Jedi training with Luke Skywalker (played by Mark Hamill in the Season 2 finale), it seems that Djarin will need a new adventure in the third season of Jon Faveau and Dave Filoni’s hit streaming show.

The odds are seemingly good that Season 3 will somehow involve Sackhoff’s Bo-Katan Kryze trying to win the Darksaber back from Djarin so she can avenge the death of her sister, Duchess Satine Kryze, and retake Mandalore.

Furthermore, the Star Wars fan community had an overwhelmingly positive reaction to Sackhoff’s live-action portrayal of the character — much like the response to Rosario Dawson’s debut as Ahsoka Tano — so it would make sense to continue to showcase her moving forward.

Jon Favreau and Dave Filoni are notoriously tightlipped about the details of their Star Wars shows, so only time will tell for sure who is cast in The Mandalorian Season 3 and its three confirmed spinoff shows.

Are you looking forward to The Mandalorian Season 3 and its spinoffs — Ahsoka, Rangers of the New Republic, and The Book of Boba Fett?