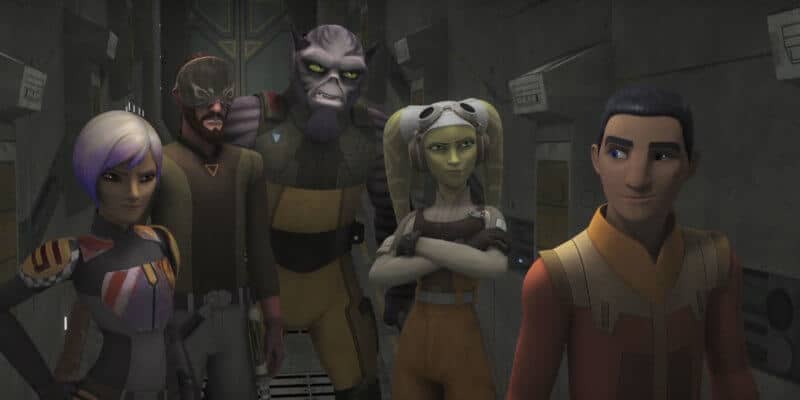 Ever since The Mandalorian actress Gina Carano was fired from Star Wars last month, there have been questions about how Lucasfilm and the Walt Disney Company will move forward in The Mandalorian saga on Disney+.

At the 2020 Disney Investor Day event, Lucasfilm President Kathleen Kennedy announced that the hit Jon Favreau and Dave Filoni series will have multiple spinoffs. Ahsoka and Rangers of the New Republic were confirmed at the virtual event, while The Book of Boba Fett was confirmed during The Mandalorian Season 2 finale episode.

Lucasfilm and Disney have confirmed, however, that they will not recast the Cara Dune character. Now, LRM Online has shared a new rumor about who might replace Dune in Rangers — and it’s sure to excite Star Wars Rebels fans!

Hera was first introduced in the animated Star Wars Rebels show as a pilot of the Ghost and an early leader in the Rebellion. Her character has also been included with a brief mention in the movie Rogue One and in the video game campaign of Squadrons.

At the time of Return Of The Jedi Hera has achieved the rank of captain and has been a part of multiple iconic Star Wars battles. The inclusion of Hera Syndulla in Rangers of the New Republic reduces the time for a backstory and allows the show to focus on newer characters.

In addition to the points made by LRM, there have been numerous reports that Mandalorian spinoff, Ahsoka, is set to serve as a live-action sequel to Rebels. It is seemingly set to follow Jedi Ahsoka Tano (Rosario Dawson) as she searches the galaxy for Grand Admiral Thrawn and fellow Jedi Ezra Bridger.

Since we know Ahsoka, Rangers of the New Republic, and The Mandalorian Season 3 will air concurrently and be interconnected, it makes sense to introduce additional animated series characters from Rebels ahead of the “streaming event” that will serve as the climax of the “trilogy” of series.

Plus, who wouldn’t love to see the Twi’lek and her Ghost ship in live-action for the very first time? We can’t wait to see more and more of the Ghost crew (hopefully) make their live-action debuts in the Star Wars universe soon! We’re even holding out hope that we’ll see Chopper.

Who could play Hera Syndulla in live-action?

Currently, there are no casting rumors surrounding Hera Sydulla. She was voiced by Vanessa Marshall, but there is no guarantee she would get the live-action role — Bo-Katan Kryze was played by her voice actress, Katee Sackhoff, but Ahsoka Tano was portrayed by Rosario Dawson instead of Ashley Eckstein.

It’s also possible that Jacen Syndulla, the son of General Hera Syndulla and the late Jedi Kanan Jarrus, could be introduced in Rangers of the New Republic. The character first appeared in the Rebels series finale and, according to Wookieepedia, “Filoni says he has not given much thought to where the character might go in future stories, many creatives within Lucasfilm have expressed interest in the future of the character.”

Remember, the rumor that the gifted pilot will appear in the Star Wars galaxy again has not been confirmed by Lucasfilm executives at this time. Stay tuned to Inside the Magic for more details as they emerge.

The Mandalorian showrunner Jon Favreau and executive producer Dave Filoni tend to be tightlipped about their shows, so it could potentially be some time before details about any Mandalorian spinoffs are certain.

Do you want Hera Syndulla to star in Rangers of the New Republic?