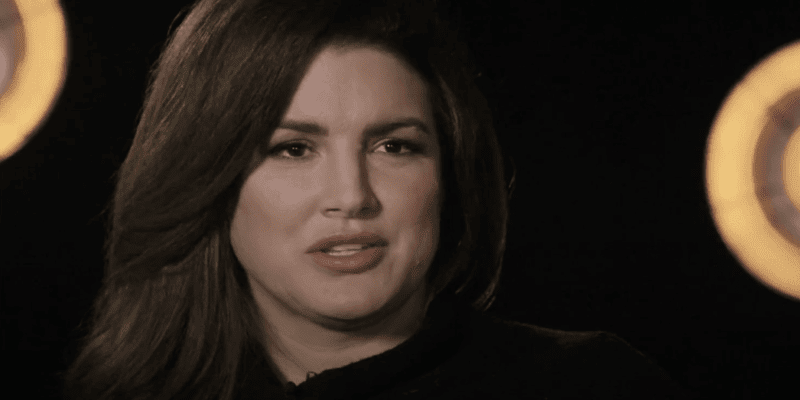 For many Star Wars fans, the end of Gina Carano’s career with Lucasfilm has been a long time coming. Yet, on the other side of the coin, the Mandalorian actress still has thousands of supporters who would like nothing more than to see her come back to the hit streaming series.

No matter what you think about the former Muay Thai and women’s MMA fighter personally, she has certainly generated conversation (and controversy) on social media for the better part of six months.

Throughout The Mandalorian Season 2, Carano became known for her social and political Tweets. Twitter users created opposing hashtags, like #FireGinaCarano and #WeLoveCaraDune, that have trended off-and-on since the Star Wars actress first came into the spotlight.

The situation began when Carano’s Tweet about preferred pronouns went viral — many considered it offensive to trans people and the actress received significant backlash.

At one point, in fact, Carano was one of the biggest stars in the world on IMDb’s StarMeter ranking — this was due not to her acting as New Republic Marshal Cara Dune, but to the viral nature of her personal Twitter account and the responses that came from it.

Following her firing, Carano quickly announced that she had a new film project in the works with backing from Ben Shapiro’s The Daily Wire website.

Now, she has spoken on The Ben Shapiro Show in her first post-Star Wars interview. Deadline provided a preview of what’s to come when the interview officially drops tomorrow:

“I’ve been through so much, and I’ve seen so much now, clearly, of the bullying that’s been taking place, and I saw it before,” the actress will tell Shapiro with whom she has a new movie deal. “I’m not the only one that’s ever been bullied by this company, and I know that so deeply,” she will claim.

Per Deadline, Carano’s interview will also include these details about her experience:

“You know how boxers head-hunt sometimes and forget to go for the body? I feel like Disney or Lucasfilm or whoever it is, just certain people at that company…I feel like I’ve been being head-hunted (…) and you can feel it. Just a couple of weeks ago, Lucasfilm asked an artist that they employ to erase my character and put a different character in place, and he proudly announces this on Twitter, and erases my character and puts another character in place. All the fans of Cara Dune were just outraged. They were like ‘Why didn’t you add the character? Why did you have to take off the character? Is there something wrong? Is Gina getting fired?”

“…They accidentally sent me an email, which was very enlightening, so I knew. I knew they were paying attention. I know there were some people who went to bat for me, but I know that they didn’t win out at the end.”

Although Carano didn’t specify who “went to bat” for her, there have been numerous reports that Mandalorian creator and showrunner Jon Favreau — who developed the Cara Dune character specifically for the actress — did not want her to be fired, so it is possible that he was one of her supporters behind-the-scenes.

At this point, Disney and Lucasfilm have confirmed that Cara Dune will not be recast. This news comes amid fans calling for UFC fighter Ronda Rousey or actress Lana Parrilla (Once Upon a Time) to take Carano’s place.

It also means the upcoming Rangers of the New Republic Mandalorian spinoff series may look very different than it was initially supposed to.

Related: Gina Carano on Why She Has NOT Seen ‘The Mandalorian’ Season 2

The series, from all accounts, was supposed to feature Carano in a leading role. Some fans are now calling for actor Paul Sun-Hyung Lee (X-wing pilot Carson Teva) to take on a larger role in the show, but nothing has been confirmed.

In addition to Rangers of the New Republic, fans of live-action Star Wars series can look forward to The Mandalorian Season 3, Ahsoka, and The Book of Boba Fett. All four series will take place within Jon Favreau and Dave Filoni’s corner of the Star Wars universe.

Currently, only The Book of Boba Fett has a definitive release date — it will debut on the Disney+ streaming platform in December 2021.

What do you think about actress Gina Carano’s first interview after she was fired from the Star Wars franchise? Were you team fire Gina Carano or team keep Gina Carano?