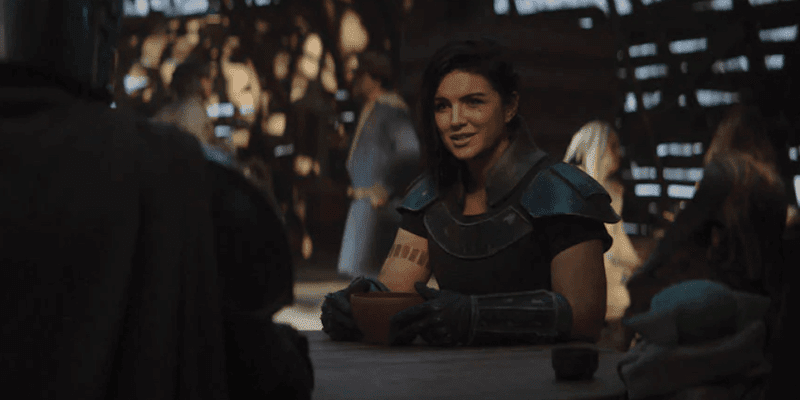 Last week, news broke that Star Wars actress, Gina Carano, had been fired by Lucasfilm and The Walt Disney Company.

Carano, who played ex-mercenary and current New Republic Marshal Cara Dune on The Mandalorian, had been the subject of online controversy for months — Star Wars fans were divided, with #FireGinaCarano, #IStandWithGinaCarano, and #WeLoveCaraDune trending on Twitter at various points throughout the second season of Disney+ series.

What started the Gina Carano controversy?

The former Muay Thai and women’s MMA fighter became known for her divisive political and social justice opinions. The situation began with a Tweet in which Carano allegedly mocked those individuals who choose to put their personal gender pronouns in their social media biographies

“Earlier on last year before The Mandalorian came out, they wanted me to use their exact wording for an apology over pronoun usage.”

The actress continued, “I declined and offered a statement in my own words. I made clear I wanted nothing to do with mocking the transgender community, and was just drawing attention to the abuse of the mob in forcing people to put pronouns in their bio.”

Weiss then detailed that Lucasfilm punished her by excluding her “from all press and promotion for the show.”

Carano stated, “That was heart-breaking, but I didn’t want to take away from the hard work of everyone who worked on the project, so I said ok.”

How did Carano find out she was fired?

Following the pronoun post, Carano continued to receive both backlash and support from Twitter users for months. At one point, the amount of press she was receiving made Carano the most popular star in the world on IMDb’s StarMeter ranking system.

Finally, just ahead of last week’s firing announcement, things came to a head when Carano posted an image that many viewed as anti-Semitic. Lucasfilm and Disney echoed this sentiment.

The Hollywood Reporter shared the following statement regarding the situation:

In the Weiss interview, Carano, whose father is ex-NFL quarterback Glenn Carano, shared that she wasn’t told she was fired until the story broke on the internet — nobody from Lucasfilm or The Walt Disney Company called or texted her the information. The ex-Star Wars actress said:

“I found out through social media, like everyone else, that I had been fired.”

What’s next for Cara Dune?

At this point, Gina Carano’s Cara Dune has an extremely uncertain future within the Star Wars franchise. Favreau created the character specifically for Carano, with the ultimate intention of giving her a spinoff series within The Mandalorian saga.

Now that Carano has been let go, there has been no official word on what is happening with that particular spinoff, Rangers of the New Republic. The series was set to air concurrently with The Mandalorian Season 3 and another spinoff, Ahsoka, that is set to feature Rosario Dawson’s Ahsoka Tano.

At this time, only the third Mandalorian spinoff show, The Book of Boba Fett, has a release date. It will debut on Disney+ in December 2021.

Katee Sackhoff’s Bo-Katan Kryze and her Nite Owl warriors — Koska Reeves played by Sasha Banks and Axe Woves played by Simon Kassianides — are also rumored to return to complete the Darksaber story, but nothing has been officially announced.

Stay tuned to Inside the Magic for the latest details about the upcoming season of The Mandalorian and all of its spinoffs — Rangers of the New Republic, Ahsoka, and The Book of Boba Fett.