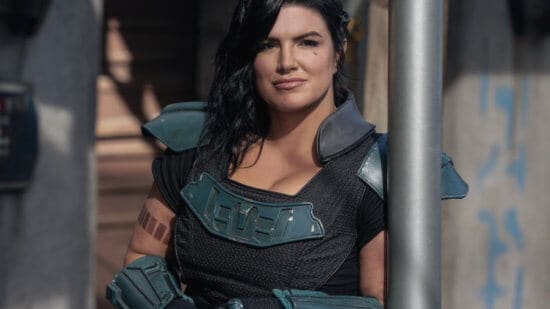 Gina Carano, 38, starred in the popular Disney+ series The Mandalorian as the New Republic Marshal Cara Dune. Quickly growing a following, the former MMA fighter and Deadpool star took to social media to both share her gratitude for the hit Star Wars series as well as share her sometimes divisive personal opinions. Throughout season two of The Mandalorian, #FireGinaCarano, #WeLoveCaraDune, and #IStandWithGinaCarano have trended on Twitter.

#CancelDisneyPlus is trending on Twitter, with the “Gina Carano” topic right behind it.

Carano’s controversial tweets sparked online fights between fans of Carano and viewers of The Mandalorian who weren’t fond of the star broke out on social media, causing the actress to become one of the most popular entertainers of 2020, according to IMDb.

Garnering an impressive film career, any Star Wars fan was excited to see a previous MMA fighter throw her own punches on screen and bring authenticity to Dune’s role. However, her biggest fight broke out between critics and Twitter users.

Interestingly, some of Gina Carano’s most prominent support came from her Mandalorian co-stars. Co-stars Pedro Pascal (Din Djarin), Katee Sackhoff (Bo-Katan Kryze), Carl Weathers (Greef Karga), and Ming-Na Wen (Fennec Shand) all voiced support for the actress at various points. It seemed that the cast and crew of The Mandalorian were able to set aside their differences and work towards a common goal of creating a fantastic Star Wars universe.

The Mandalorian’s massive popularity spawned numerous spin-off series and a third season for the bounty hunting show. Gina Carano’s Cara Dune was expected to star in the upcoming The Rangers of the New Republic. While there’s little information regarding the Disney+ series, it could have followed Cara Dune and X-wing pilot Carson Teva (Paul Hyung-Sun Lee). This has not, however, been confirmed.

Previous to today’s action, the Walt Disney Company and Lucasfilm remained silent on Carano’s social media posts. The Mandalorian showrunner Jon Favreau even reportedly protected The Mandalorian star from being fired in the past. Still, it appears that even he was unable to save Cara Dune’s existence in upcoming Star Wars stories.

What do you think about #CancelDisneyPlus trending on Twitter? Let us know in the comments below!