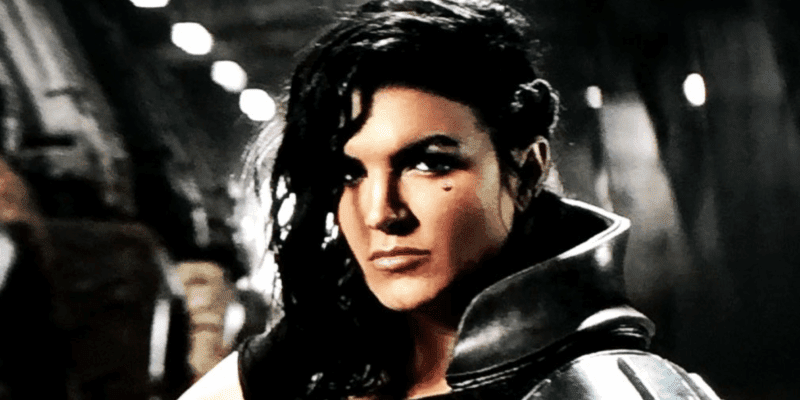 The Disney+ Jon Favreau and Dave Filoni hit series The Mandalorian has been heavily discussed all over social media in the past few months, with the majority of controversy stemming from actress Gina Carano. Carano — who plays ex-mercenary and the current Nevarro New Republic Marshal Cara Dune — has been at the center of both fan outrage and love for the bulk of Season 2. As of late, the pendulum of whether or not fans are on Carano’s side has not been swinging back and forth, with viewers falling on both sides of the controversy. The consistent negative perception may have some Star Wars fans wondering if Lucasfilm and Disney will recast Carano’s Cara Dune or scrap the character entirely in The Mandalorian Season 3 and its spinoffs. Carano is expected to star in Rangers of the New Republic, though nothing has been confirmed.

For months, the hashtag #FireGinaCarano has trended on Twitter many times. Most recently, the hashtag reappeared after Lucasfilm issued a COVID-19 memorial Tweet, and also resurfaced after the Capitol Building insurrection occurred and Carano liked the Tweets of apparent riot supporters. Initially, #FireGinaCarno was created due to what many have deemed controversial and outspoken political and social beliefs.

An unconfirmed report noted that Disney requested that Gina Carano issue an apology. Carano has yet to post or say anything that would resemble an apology and has responded to the recent backlash with a Princess Bride quote — it is, however, not known if an apology was requested, so this may mean nothing.

That being said, Disney’s latest commissioned artwork for The Mandalorian does not showcase her, one of the show’s lead characters. We previously reported that fans have noted the Mark Raats artwork excludes Gina Carano’s Cara Dune. It appears to replace her with Star Wars Rebels and Star Wars: The Clone Wars character Ahsoka Tano (voiced by Ashley Eckstein/played in live-action by Rosario Dawson).

The intentional exclusion of New Republic Marshal Cara Dune could have meant nothing major or something bigger — let’s look at all the options.

As we mentioned, Carano has been Disney’s center of controversy for quite some time across many social media platforms. It is no secret to suggest that Disney, like any other company, does not like to have anyone with a negative image reflect or taint their company. It could be that Disney and Lucasfilm are intentionally distancing themselves from Carano during a politically driven time for the United States. That being said, distance does not mean that Carano would be removed from The Mandalorian series.

Disney could also be looking into replacing Gina Carano’s Cara Dune. For the same reason, it wouldn’t be surprising to hear of Disney and Lucasfilm looking to replace the actress. Twitter user Loon (@BirdDisplayName) posed the possibility of a replacement, “I’ve said it before; I’ll say again: replace Gina Carano with Lana Parrilla. No one will notice.”

Would Lana Parrilla (Once Upon a Time, Lost, 24, Swingtown) be able to fill the armor of Cara Dune? Carano was sought out for her women’s MMA fighter background, a skill Parrilla does not have. That being said, there are many MMA and WWE fighters — such as wrestler Trish Stratus — who are both actors and fighters that could check off the physicality box that the role of Cara Dune demands. Loon likely mentioned Parrilla, however, due to the close physical resemblance that the actor has with Carano.

I've said it before; I'll say again: replace Gina Carano with Lana Parrilla. No one will notice. pic.twitter.com/XsjXi6FAw3

The third option would be for Disney and Lucasfilm to scrap the role of Cara Dune altogether. Disney has shown that they are willing to remove a highly acclaimed and beloved actor and role from a franchise. Johnny Depp lost his role as Jack Sparrow in Pirates of the Caribbean 6 after his ex-wife Amber Heard claimed domestic abuse allegations against the actor. Depp had many more Disney fans after years of films than Disney newcomer Gina Carano.

The storyline between Bo-Katan and Din Djarin seems to be the biggest lingering question for viewers, meaning Cara Dune’s storyline could theoretically end in the show. As Nevarro’s New Republic Marshal, Dune has her life separate from the characters trying to retake Mandalore. Even in Season 2, she was brought back into the show’s narrative for assistance. That being said, we now have many characters, from the Night Owls to Ahsoka, who could theoretically fulfill those duties.

However, many — both fans and cast members — have supported Gina Carano throughout the drama. Carano has not just been met with anger on social media as of late but also felt plenty of love from Star Wars and Mandalorian fans alike! #WeLoveCaraDune/#IStandWithGinaCarano has also been trending recently, so although Carano may garner lots of attention, it is balanced.

Pedro Pascal, Katee Sackhoff, and Ming-Na Wen have all boasted on behalf of Gina’s character as a person and talents as an actor. Plus, there are unconfirmed reports that creator Jon Favreau is keeping Disney from firing Carano, which would imply Favreau has higher autonomy than Kathleen Kennedy, President of Lucasfilm, for The Mandalorian’s casting.

None of this has been confirmed by Disney or Lucasfilm, and it is all this writer’s speculation. With the ongoing rumors that Carano is set to appear in Rangers of the New Republic, the controversies and continued silence on the matter leave all of this simply theoretical.

If you’re a Star Wars fan, do you think Disney and Lucasfilm will replace Gina Carano as Cara Dune? Do you think the character will be gone from The Mandalorian Season 3 altogether?