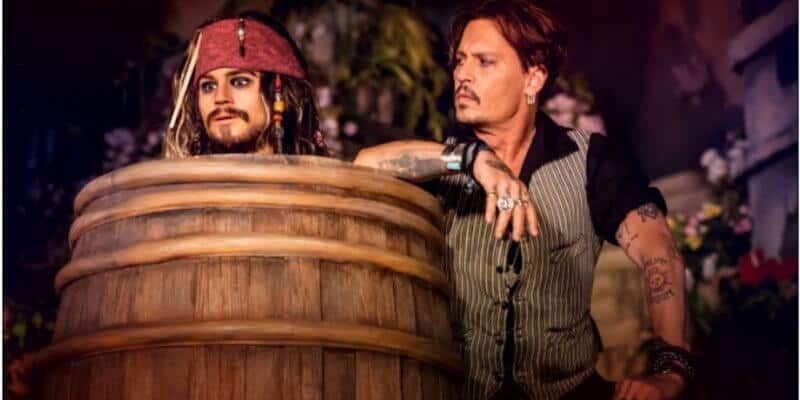 Disney may be eliminating Depp’s Jack Sparrow from the Pirates of the Caribbean franchise on film, but it looks like the fan-favorite pirate is sticking around the Disney Parks!

That being said, with Disney deciding to remove Johnny Depp’s Jack Sparrow from the Pirates of the Caribbean franchise in future films, it seems they are not planning on removing the character from their Disney Parks.

At Disney World, Jack Sparrow is not only in the Pirates of the Caribbean attraction, but currently has a meet and greet set up across from the ride in Adventureland. With the pandemic came a large reduction of meet and greets due to the crowds they cause, and really, lack of performers due to the tens of thousands of Cast Member layoffs made across the Walt Disney company. However, it seems that with all this in mind Disney World still thinks Jack Sparrow to be one of the few characters that must be showcased at the Magic Kingdom.

Inside the Magic’s Senior Editor Kelly Coffey was reporting from Magic Kingdom when she was able to to a socially distanced meet and greet with Jack Sparrow. In the photo, just by Sparrow’s pose, we can see that the performer is bringing in Johnny Depp’s playful quality that he instilled in the character which only goes to show that it is not just Jack Sparrow that is still in the Disney Parks, but Depp’s version of Sparrow.

The below video is yet another example of the Magic Kingdom Jack Sparrow acting just as Johnny Depp did while filming the first 5 Pirates of the Caribbean films. We can see that Sparrow is continuing to perform with lots of Guest interaction, making his presence known and recognizable.

The interesting thing to note is the fact is that the films are seemingly doing the exact opposite. Pirates of the Caribbean 6 will no longer feature Johnny Depp, or reportedly, any of the other characters even associated with him. The new film will have Margot Robbie star as the lead pirate, taking the captain hat from Depp, with a brand-new all-female cast.

This dramatic change in the franchise shows that Disney is clearly doing their best to keep the world audiences know and love from Pirates of the Caribbean while introducing new storylines that do not involve Jack Sparrow.

To be moving in such polar opposite directions from the franchise’s representation in the parks vs film is an interesting choice on Disney’s part. We once posed the question in an article ‘Will Disney Remove Depp’s Jack Sparrow from the Pirates of the Caribbean Ride?‘ and although we had no sure answer, reasons such as refurbishment costs for the American attractions, and the fact that Shanghai’s attraction is fully based on the films which would mean a complete overhaul could pose a financial reason to not do so.

There is also the fact that Pirates of the Caribbean fans love Johnny Depp as Jack Sparrow, and removing him from the attractions could upset Guests. However, considering Disney removed him from the films without succumbing to fan outrange on the decision likely means they could remove him from the parks without remorse as well.

That being said, it is clear that at the moment, Jack Sparrow is alive and well at the Disney Parks, especially Disney World! He may be removed one day, whether that be due to the Johnny Depp controversies that surround the character, or because the character becomes dated — but for now, Sparrow lives on at Disney!

What happened with Johnny Depp?

In case you are wondering why Depp lost Pirates of the Caribbean, as well as his role as Gellert Grindelwald in Warner Bros. Fantastic Beasts 3 (Mads Mikkelsen is currently set to take over Depp’s character in the Fantastic Beasts franchise.), we will bring you up to speed.

Depp is in a current deal battle with ex-wife Amber Heard (Aquaman) for which she has abused him of domestic abuse. Although the $150 million high court legal battle is still underway, Depp also went to court with the U.K. tabloid newspaper The Sun who accused him of being a “wife-beater”. Johnny Depp has since lost that libel battle with the U.K. high court and his career went toppling down with it.

Amber Heard has even now subpoenaed Disney to get all information regarding Johnny Depp’s behavior when filming  Pirates of the Caribbean: Dead Men Tell No Tales, as well as other correspondences the company had with him. All of this negative light has reportedly caused Depp to turn to smaller production houses in search of work.

But Depp has plenty of people on his side. There is currently a petition of almost 400,000 signatures going around to save Johnny Depp from losing his role as Jack Sparrow in Pirates of the Caribbean 6 and Kevin McNally, who played Captain Jack’s sidekick Mr. Gibbs in all five Pirates movies to date, has said the sixth film without Depp would be “criminal”.

Most recently, we discovered that Depp is in talks to star as Gomez Addams in The Addams Family, an idea sparked by Burton. It is also rumored that the long-awaited Beetlejuice 2, which Burton has repeatedly expressed interest in directing, may come to fruition with Johnny Depp starring in the film.

For now, we will just need to wait and see how the Johnny Depp drama unfolds and if it ends up having a larger effect on the Disney company by infiltrating Jack Sparrows’ presence in the parks.

Do you think Disney is going to get rid of Johnny Depp’s Jack Sparrow in the parks? Let us know your thoughts!