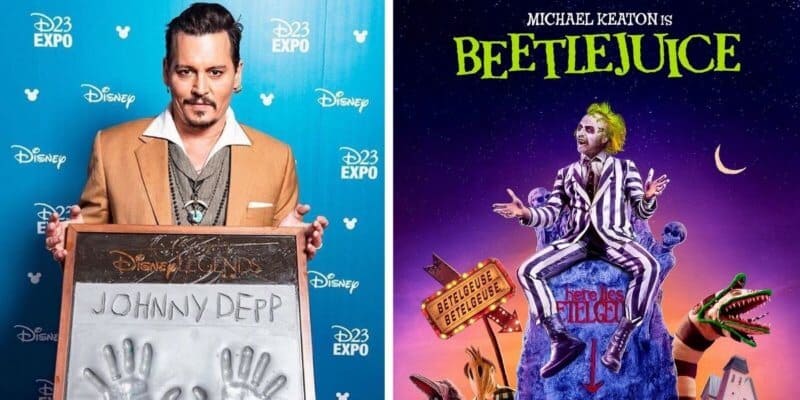 Pirates of the Caribbean star Johnny Depp had a tough go in the spotlight in 2020 — now bleeding into 2021 — due to his lost libel case against ex-wife Amber Heard, which has thrown a wrench into his career in Hollywood. But, it looks like something strange and unusual may be coming Depp’s way.

According to Style Magazine, it is rumored that Tim Burton is set to direct Beetlejuice 2 and wants Johnny Depp to star in it.

The original cult-classic Beetlejuice (1988) starring Michael Keaton and Winona Ryder was directed by Tim Burton, and a sequel has been in talks for a while. A few years ago, Burton released a now redacted statement that claimed Beetlejuice 2 was a go:

The film is a go and has been approved by the Warner Bros. team, we have talked with the cast members we wanted for the film and they are all on board, this includes both Winona and Michael. We have the script in hand everything is in place all we need to do now is get ready to start filming.

However, at that time, Burton was busy with Miss Peregrine’s Home For Peculiar Children and Dumbo — but that does not mean Beetlejuice 2 is out of the question.

The rumor for Burton and Depp to join forces once again is not entirely difficult to believe, as the dynamic duo has worked with one another over and over again. Especially considering that Depp is in talks to star as Gomez Addams in The Addams Family — an idea sparked by director Tim Burton.

Tim Burton has been a major player in Johnny Depp’s career, allowing it to skyrocket through films such as Edward Scissorhands (1990), Sleepy Hollow (1999), Charlie and the Chocolate Factory (2005), Corpse Bride (2005), Disney’s Alice in Wonderland and Alice Through the Looking Glass (2016), and more. Depp has also starred alongside Tim Burton’s ex-wife Helena Bonham Carter in Burton’s musical, Sweeney Todd: The Demon Barber of Fleet Street (2007).

Although Depp is seemingly seen as a Hollywood outcast at the moment after losing his libel case against The Sun, who wrote Depp was guilty of domestic abuse against his ex-wife Amber Heard, — a claim Depp continues to deny — his fragile career could make a comeback. Indie producer Orian Williams stated, “If he manages to get one more good part, he could ostensibly come back. I would consider hiring him for the right role. You can question a lot, but you can’t ever question his talent.” That one good part could lie in the possible sequel of Burton’s Beetlejuice 2.

Margot Robbie is set to helm the ship, as many are deeming her character the new ‘Jack Sparrow’ considering she will play the lead character of the film, much like Johnny Depp once did for the franchise. That being said, Depp fans are not happy. Petitions to save Depp as Jack Sparrow in Pirates of the Caribbean are emerging with almost 400,000 fan signatures, and social media outrage has already begun.

Warner Bros. also asked Johnny Depp to step down from his role as Gellert Grindelwald in Fantastic Beasts 3. Mads Mikkelsen is currently set to take over Depp’s character in the Fantastic Beasts franchise. Considering the original Beetlejuice is a Warner Bros. film, if the sequel were to be distributed by the company once again, it might pose an issue for Burton to include Depp.

Unfortunately, Depp’s bad luck does not end there. We recently reported that a woman broke into Depp’s home in Hollywood Hills. The break-in set off an alarm, and the intruder was caught. At this time, the woman’s name has not yet been released, and it is unclear if anything was stolen from Depp’s home.

Depp’s eccentric acting style would make for a perfect role in Beetlejuice 2 — even the title role if Keaton were unable to reprise it. For now, we will need to sit tight to wait and see what further developments occur with the film, as it is currently speculation. However, with the Broadway musical of the film bringing lots of attention back to the franchise before it’s closure, now would be a perfect time to see the return of Beetlejuice.

Do you think Johnny Depp should star in Tim Burton’s Beetlejuice 2?