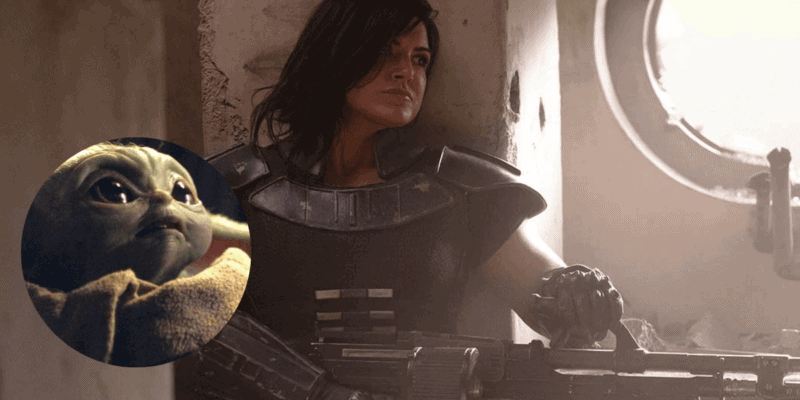 Gina Carano the actress who portrays the Cara Dune character on Disney’s hit streaming series, The Mandalorian, has admitted she hasn’t watched the latest season of the show.

Carano has been surrounded by controversy over her personal Twitter account. However, she remains immensely popular among fans of The Mandalorian. Season 2 has recently finished, and we do not yet have an exact premiere date for The Mandalorian Season 3.

So, why has Gina not watched Season 2? Well, in a recent interview, she explains that while she anticipates watching it soon, it is difficult to watch herself on film. It’s pretty common for many people to have this same reaction to seeing themselves on film or hearing their voice played through a recording.

“I don’t like to watch myself. I feel like I get in my head a little bit,” Carano explained. “I’ll watch it eventually just to see how I can grow from it. The more fascination for me was seeing the other Star Wars fans enjoy it. With a franchise, I think somebody has to be such a fan, they have to be a big fan of what they are doing, or else I don’t think it works as well”

Additionally, Gina and the rest of the cast were intentionally kept in the dark about the final episode’s emotional ending. According to a report by MovieWeb.com, showrunners Jon Favreau and Dave Filoni went to great lengths to keep the appearance of Luke Skywalker a secret to the cast. Gina had this to say about the reveal during filming:

Related: Gina Carano Originally Thought She Was Playing a Wookie in ‘The Mandalorian’

“[It’s] the most secretive thing that I’ve ever been a part of.” She continues, “to the point where like you have to wear cloaks in between studios. Like, big black cloaks so that, like, you know somebody from the top of the roof doesn’t take pictures.” Like past Lucasfilm projects, the scripts are kept under lock and key. Carano says, “you only get the scripts that you’re in. And they’ve got a name printed out all over it so, if anything ever gets out…”

“So I started finding out about it in the makeup trailer, basically because you’re like, ‘Oh wait, who’s that?’ And because they didn’t say it in the script… And then you know… everyone that has worked on The Mandalorian is insane, like insane Star Wars fans. And they have the shirts and they’re like, ‘Wait a second.’ And so, everybody starts doing a little whispering.”

As fans of The Mandalorian and the Star Wars universe in general, we love getting these small bits of behind-the-scenes information!

Are you surprised that Gina Carano hasn’t watched Season 2 of The Mandalorian yet? Let us know in the comments.