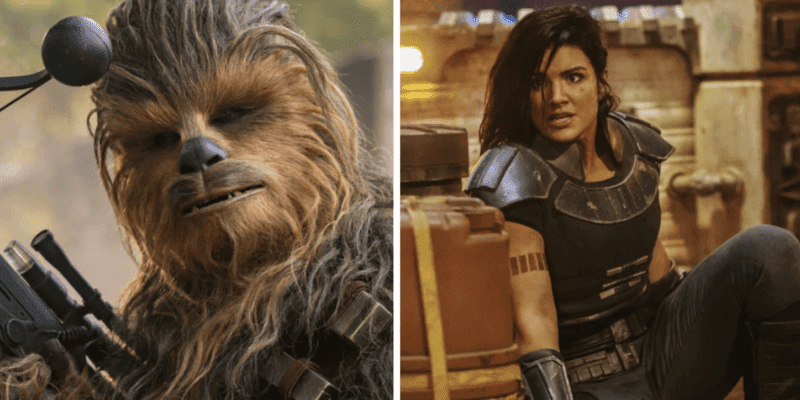 The Mandalorian actress, Gina Carano, received more than her fair share of press throughout Season 2 of the hit Disney+ Star Wars series.

Carano became something of a social media sensation — more, however, for her Tweets than her acting as former mercenary and current New Republic Marshal Cara Dune.

Carano is known for using her Twitter account to share sometimes controversial and divisive thoughts and memes regarding social and political issues. As a general rule, her followers fall on both sides of the aisle, with both #FireGinaCarano and #WeLoveCaraDune trending at various points during The Mandalorian Season 2.

In the show, Carano’s character enjoyed quite a bit of development this season, possibly gearing-up for her rumored spinoff series, Rangers of the New Republic. Though Lucasfilm and Disney have not released details about the plot of this new show set within the world of Grogu (AKA The Child AKA Baby Yoda) and Din Djarin’s (Pedro Pascal) Mandalorian saga, it seems likely that it will focus on Dune’s work as a Marshal on Nevarro, given her story arc throughout the most recent season.

Related: Pedro Pascal Speaks Out on Gina Carano’s Performance in ‘The Mandalorian’

Outside of acting, most recently Carano has spoken out about the controversy regarding Pablo Hidalgo — the Lucasfilm creative executive who mocked a popular Star Wars YouTuber’s reaction to The Mandalorian Season 2 finale, which featured a CGI de-aged cameo by Mark Hamill as a young Luke Skywalker. She was featured around the 34-minute mark of a Geeks & Gamers YouTube video, which can be viewed in full below:

Now, looking back on Carano’s comments about being cast in The Mandalorian during Season 1 of showrunner Jon Favreau and executive producer Dave Filoni’s popular Star Wars series, the former women’s MMA star didn’t always realize she was going to be such a prominent — and unmasked — character.

As per Vanity Fair:

“I thought I was going to be like the female Chewbacca,” Carano says of getting the call to join The Mandalorian. “I was ready to put on the fur outfit and be the female version of that. That’s what I thought. I was surprised to find that I was one of the few people that you were actually going to see her face—and in a lot of scenes, sometimes the only face, which is pretty incredible.”

The publication also shared that Mandalorian creator Favreau didn’t audition any other actresses for the role of Cara Dune — he wrote the character for Carano.

She discussed getting fitted for her armor, once she discovered she was not, in fact, playing a Wookiee.

Since Dune is not a Mandalorian, her attire, of course, is not made of beskar like Djarin, Bo-Katan Kryze (Katee Sackhoff), and Boba Fett (Temuera Morrison) wear:

…[the Mandalorian costume includes a] “very Han Solo blaster.” The finished product, Carano was relieved to see, both made Cara Dune look tough enough to “take down a buffalo” but still let the actor feel attractive: “They found the most incredible balance, hopefully little girls and, or boys can put it on for Halloween.”

There is no official word from Lucasfilm about Cara Dune — and Gina Carano’s — future with the Star Wars franchise.She did appear in several episodes of the second season and played a major role in the season finale (“Chapter 16: The Rescue).

Although there is an unconfirmed rumor that Disney would like an apology about her controversial Tweets before officially granting Gina Carano’s Cara Dune a spinoff series, this has not been substantiated by Lucasfilm President Kathleen Kennedy or any other executives. Thus, it is possible that we’ll see the character in her own show sooner rather than later.

Stay tuned to Inside the Magic for all of the latest on The Mandalorian and its spinoffs, including their eventual release dates. The Mandalorian Season 3, Rangers of the New Republic, and another spinoff, Ahsoka, are not on Disney’s 2021 release schedule.

Do you hope Gina Carano stays in the Star Wars universe for the long haul? What do you think about her hilarious initial assumption she would play a Wookiee?