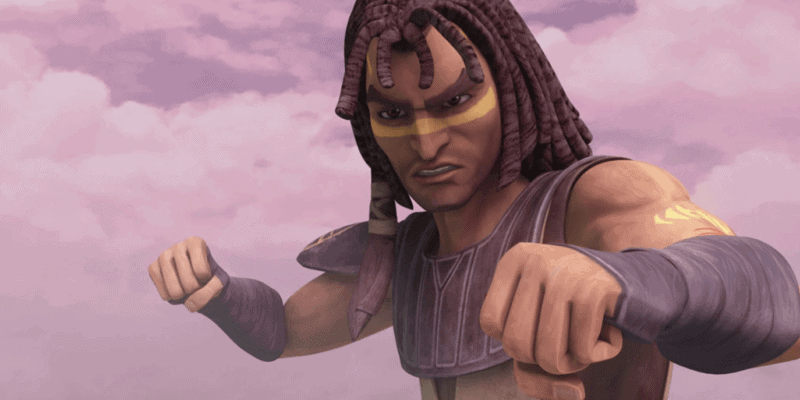 During The Mandalorian Season 2, a lot of questions about Grogu’s origin were finally answered — you know, except for the name of his species, but we’ve already been waiting 40 years for that.

In “Chapter 13: The Jedi” Ahsoka Tano (Rosario Dawson) communicated with “Baby Yoda” via the Force, ultimately sharing his real name and his tragic past with Din Djarin (Pedro Pascal). As it turns out, the 50-year-old infant was at the Jedi Temple on Coruscant during the execution of Order 66.

Somehow, he was saved. A recent fan theory suggests that Star Wars: The Clone Wars character, Quinlan Vos (Al Rodrigo), could have been the mysterious rescuer.

It’s worth noting that Vos was on Kashyyyk during Order 66 in Star Wars Legends, which would have made it impossible for him to be Grogu’s savior. Although Mandalorian creator Jon Favreau and Dave Filoni are rumored to be making one Legends character, Mara Jade Skywalker, canon, this doesn’t necessarily mean they would stick to the Expanded Universe storyline for Vos.

So, if that is the case, it is theoretically possible for him to be the Star Wars character who ushered Grogu to safety.

As it turns out, Star Wars fans have already been doing their own casting of Vos on social media. Let’s dive into which actors fans would love to see play the Kiffar Jedi Master.

I am DEVOURING this book, so I’m manifesting a live action with @Zach_McGowan as Quinlan Vos. Please and thank you universe

I am DEVOURING this book, so I'm manifesting a live action with @Zach_McGowan as Quinlan Vos. Please and thank you universe ? pic.twitter.com/rJc87ZwnOm

Zach McGowan is best known for his work on Marvel’s Agents of SHIELD as Anton Ivanov/The Superior, Black Sails as Charles Vane, and The 100 as Roan.

Another social media user, going by Commander Cody, asked “Who would be your choice for a live action Quinlan Vos?” One response by Sal Scalici read:

@genebraverock for Quinlan Vos. @disneyplus @dave_filoni, love to see a live action Book of Quinlan Vos mini series in @starwars canon. Underrated character who should be alive in Mandalorian era. Eugene would crush it

@genebraverock for Quinlan Vos. @disneyplus @dave_filoni, love to see a live action Book of Quinlan Vos mini series in @starwars canon. Underrated character who should be alive in Mandalorian era. Eugene would crush it pic.twitter.com/a7fp1H9L4O

Steven Anderson replied to a Dave Filoni Tweet to share his thoughts about a live-action Quinlan Vos:

Jason Momoa, known for playing Arthur Curry/Aquaman in both Justice League (2017) and Aquaman (2018) and the title role in Conan the Barbarian (2011), undoubtedly resembles Vos. He is a popular fan choice to play the Star Wars character if and when he makes his live-action debut.

Ricky Whittle is best known for his work on multiple TV series, including Hollyoaks, American Gods, and NCIS.

Finally, E noted that he would live to see Vos’s live-action Star Wars debut in OBI-WAN KENOBI: An Original Series, rather than The Mandalorian saga:

Who do I have to bribe to get live action Quinlan Vos on Kenobi? Pleaseeeeeeeeeeeeee

Who do I have to bribe to get live action Quinlan Vos on Kenobi?

Ironically, the full cast list for the Kenobi series was just released and none of these actors were on it — however, both Ewan McGregor (Jedi Knight Obi-Wan Kenobi) and Hayden Christensen (Darth Vader/Anakin Skywalker) will be officially reprising their prequel trilogy roles.

But, in Star Wars, who’s to say if another cameo could occur down the road — or if one of the actors whose character is currently unknown could be playing Vos.

The Star Wars databank describes the Jedi as:

A Jedi with a sarcastic sense of humor and a reputation for not playing by the rules, Quinlan Vos was an expert tracker renowned for his ability to read memories from objects people handled. The Jedi Council sent him on a mission to assassinate Count Dooku, during which Vos fell in love with the assassin Asajj Ventress and was forced to learn the ways of the dark side of the Force.

What else is happening in the Star Wars galaxy?

There are also plenty of other chances for Vos to make his first live-action appearance in the current Star Wars canon. Per Lucasfilm President Kathleen Kennedy’s 2020 Disney Investor Day announcement, there are at least 11 Star Wars series in the works for Disney+.

These include the next chapter within the Mandalorian universe, The Book of Boba Fett, set to debut in December 2021. In addition to Book of Boba and The Mandalorian Season 3, two other spinoffs, Ahsoka and Rangers of the New Republic, are on tap in Favreau and Filoni’s ongoing Mandalorian saga.

Also on the slate is Leslye Headland’s The Acolyte. This darker Star Wars series is set to take place at the end of the High Republic era and may explore the rise of Darth Plagueis, Darth Sidious/Emperor Palpatine’s mentor — and murder victim. It’s as intriguing as it sounds, we promise.

The Acolyte will, of course, take place generations before Vos was born — the High Republic age was about 200 years before Star Wars: Episode I – The Phantom Menace (1999) — but it will set the stage for the rise of the Sith, which could, of course, ultimately play into a storyline involving Vos and Ventress.

Do you think Quinlan Vos will make his live-action debut soon? If so, who should play the character?

Comments Off on Fans REALLY Want Quinlan Vos In Live-Action