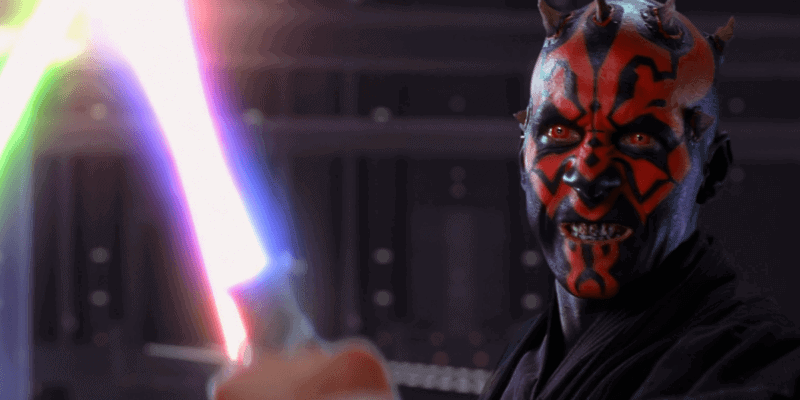 Darth Maul is one of the most terrifying villains in all of Star Wars lore. The fearsome Sith Lord first portrayed by Ray Park in Episode I: The Phantom Menace way back in 1999 is well-known for his distinctive horned devil-like appearance. Though, I suppose that over the years, with his popular runs on Star Wars: The Clone Wars and Star Wars Rebels, we as a fan culture have grown accustomed to his monstrous face. That’s why Twitter is ablaze tonight after one Star Wars fan has done something to Darth Maul far worse than even Obi-Wan Kenobi – or at least half as bad?

Photoshop is a pathway to many abilities, some considered to be unnatural. Twitter user @SeattleSloth_ was definitely tapping into the dark side of his photo editing software when he unleashed an unspeakable abomination, dubbed Smooth Maul, on an unsuspecting Twitter-verse. In an understated Tweet, Tony Sloth’s Pro Skater (@SeattleSloth_) stated simply,

In the cursed images, Darth Maul’s menacing Dathomirian face tattoos have been scrubbed, revealing a smooth-as-silk baby face that looks less like a Sith Lord — and more like the dark side of Blue Man Group. It’s like Exegol meets exfoliation. Of course, Twitter has responded to the can’t-unsee-it nightmare in the usual, hilarious Twitter fashion.

Dimas Haq (@Dimas_addinhaq) tweeted exactly what all of us will be muttering under our breath as we rock ourselves compulsively to sleep tonight:

smooth maul should be illegal!

smooth maul should be illegal!

“Smooth Maul? Never heard of him.”

Woe Sorors (@woesoros) took things one step further and shared a doctored image of Maul without his famous horns — even scarier. Why!?

“I raise you the smoothest maul”

I raise you smoothest maul pic.twitter.com/KkMsHQ4C5Z

What’s the difference between the internet and Ahsoka Tano?
The internet can’t let Maul go!

Finally ConflictFrogs (@TheBarnacleBill) summed up what we are all thinking:

Take it away, Smooth Maul!

Perhaps we won’t have to deal with this disturbing image for too much longer. After all, a brand-new The Falcon and the Winter Soldier is now available on Disney+, and Marvel series have a knack for taking over the internet.

Next up for the REAL Maul? Presumably a trip to Tatooine in OBI-WAN KENOBI: An Original Series. Actor Ray Park recently teased Maul’s reappearance in the Star Wars franchise on social media, indicating that the rumors of Maul making cameos in multiple Disney+ Star Wars series just might be true after all.

What do you think? Is “Smooth Maul” a nightmare that will forever terrorize you? Or, does he kind of look like Vision with horns?