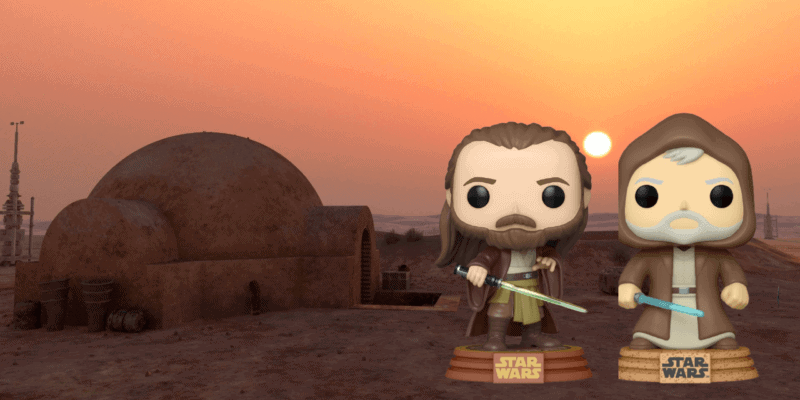 After the huge success of the Battle at Echo Base collection last year, it looks like Funko, Star Wars and Amazon are teaming up once again for a new series of Star Wars Funko POPs. This time the collection is called “Across the Galaxy” and to kick things off there are two new releases featuring a couple of fan-favorite characters, Obi-Wan Kenobi and Qui-Gon Jinn.

Let’s take a look at the new versions of the characters below:

The new figure is based on the old Ben Kenobi as we see him on the desert planet Tatooine at the start of Star Wars: A New Hope. The figure comes with a collectible Pop! pin of Obi-Wan and the figure itself measures around 4-inches tall and is priced at $14.99 and releases on June 1st.

Obi-Wan has grown from strength to strength in fan popularity over the years, initially seeing a resurgence thanks to the incredible performance by Ewan McGregor in the prequel trilogy and then thanks to James Arnold Taylor and his performance of the character in the Clone Wars animated show. With a Disney+ show starring Ewan McGregor on the way, the popularity of the character is going nowhere anytime soon.

The new Qui-Gon Jinn Funko POP is again based on his outfit when he visited Tatooine and comes equipped with a pretty cool decorative stand. As this figure doesn’t come with a pin, it’s slightly cheaper at $11.99 and is out now!

There are huge rumors circulating at the moment that there’s a Qui-Gon Jinn series in the works for Disney+ and that Liam Neeson is in talks to return. This could have some truth in it given how much the actor has continually expressed his interest in returning to the character.

A reminder that these are just the first two figures to be released in the new “Across the Galaxy” collection, we’re excited to see what’s coming next!

Which of the new Funko Pops are you most looking forward to? Let us know in the comments below!