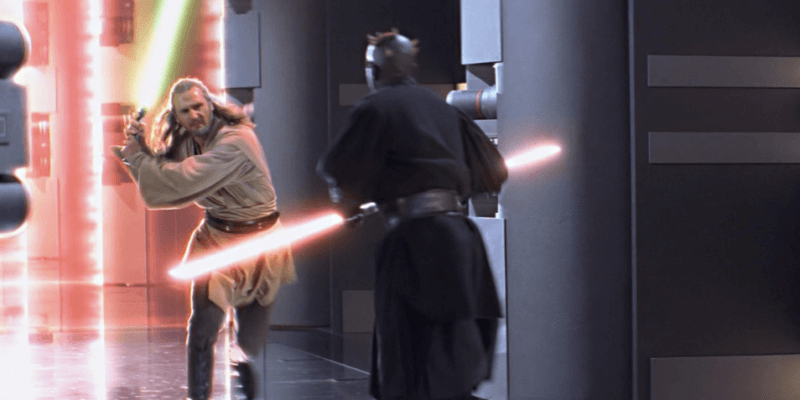 If you grew up in the 1990s and early 2000s, you almost assuredly saw the Star Wars prequel trilogy in theaters. Although the prequels were not received with much positivity at the time, the movies have grown on the Star Wars fan community in the intervening two decades — Jar Jar Binks, though, not so much.

Even Hayden Christensen, whose performance as Anakin Skywalker/Darth Vader was initially much-maligned, will be reprising his role as the Dark Lord in the upcoming OBI-WAN KENOBI: An Original Series.

However, all criticism aside, one of the most consistently popular characters from this particular Star Wars trilogy is Qui-Gon Jinn (Liam Neeson).

Recently, Neeson shared that he would love to return to the Star Wars universe — then, strangely, the A-List actor promptly retired from action movies.

Now, in another twist of events, a new rumor indicates that Neeson is involved in a Qui-Gon Jinn series for the Disney+ streaming platform. While this is unconfirmed, it does track with Neeson’s confirmation that he would reprise his role as Jedi Knight Obi-Wan Kenobi’s Jedi Master and with the numerous reports that Ray Park will once again be playing Maul in multiple Lucasfilm streaming projects.

Neeson, as we know, played Jedi Master Jinn over 20 years ago in Star Wars: Episode I – The Phantom Menace (1999). The character was killed by Park’s Darth Maul in an epic lightsaber battle.

This left Jinn’s Padawan, Obi-Wan Kenobi (Ewan McGregor), reluctantly in charge of young Anakin Skywalker’s Jedi training. And the rest, as they say, is history. Skywalker became Darth Vader and terrorized the galaxy for years, while Kenobi exiled himself on Tatooine for many years after Jinn’s untimely demise.

This is, of course, a highly simplified version of events, but suffice it to say that it’s unlikely Neeson could play a young Jinn now, over two decades later, unless CGI de-aging technology were to be used like it was for Mark Hamill’s Mandalorian Season 2 finale cameo appearance.

It is also possible that a CGI version of Neeson’s Jinn as he looked in The Phantom Menace could be used to set up a prequel series in which the character would be recast, not unlike the rumors that Sebastian Stan could someday play a young Luke Skywalker.

Since the popular Jedi’s backstory has never been explored, this would almost certainly be a hit with Star Wars fans.

If you’re unfamiliar with Qui-Gon Jinn, Wookieepedia describes him as:

…a venerable if maverick Jedi Master who lived during the last years of the Republic Era. He was a wise and well-respected member of the Jedi Order, and was offered a seat on the Jedi Council, but chose to reject and follow his own path…Jinn strove to follow the will of the Force even when his actions conflicted with the wishes of the High Council. After encountering Anakin Skywalker, Jinn brought him to the Jedi Temple on Coruscant, convinced he had found the Chosen One. His dying wish was for Skywalker to become a Jedi and ultimately restore balance to the Force.

Would you like to see a Qui-Gon Jinn series on Disney+? Do you think this is likely to happen, given Liam Neeson’s recent statements?

In 2022, you can catch Ewan McGregor’s Star Wars return as Obi-Wan Kenobi alongside Christensen’s Darth Vader. OBI-WAN KENOBI: An Original Series is due to begin filming this spring. The Kenobi series will be set about 10 years after the events of Star Wars: Episode III – Revenge of the Sith (2005).