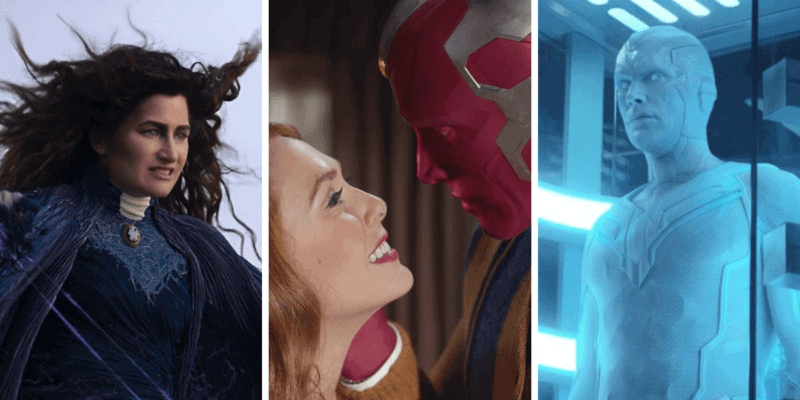 The WandaVision finale has finally launched, and the fan response has been mixed.

Many fans felt that the series ended on a real high note. However, some Marvel fans were disappointed (possibly because of expectations based on their own theories).

Let’s take a look at how fans of Marvel Studios’ first Disney+ series responded to the final episode.

Spoiler Warning: Full spoilers for WandaVision Episode 9 ahead. Read at your own discretion.

A few days ago, we reported that WandaVision director Matt Shakman was apprehensive about fan reactions to the finale. We can see why, as the finale failed to include any special cameos and unceremoniously ditched Evan Peters’s Pietro Maximoff.

However, the episode also ended the series poignantly and emotionally. Wanda’s farewell to Vision was heartbreaking, even with the knowledge that White Vision has regained all of his former memories. Indeed, the Scarlet Witch also had to say goodbye to Tommy and Billy, her two fake children.

The episode certainly pulled at fans’ heartstrings. However, the reveal of Evan Peters’s Pietro Maximoff as an actor named Ralph Bohner was…less well-received. Equally, fans found themselves laughing at the comically restrained “fight” between Vision and his white counterpart. Many were all frustrated by the lack of answers about Monica Rambeau’s (Teyonah Parris) powers. Furthermore, some fans also complained that Kat Dennings and Randall Park were mostly absent as Darcy Lewis and Jimmy Woo. Fans were very pleased with the closure afforded to Agatha Harkness (Kathryn Hahn).

However, by far the biggest complaint was the lack of a major cameo. One Skrull during the post-credits scene didn’t cut the mustard for some fans. At the very least, Marvel fans were seemingly expecting to see Benedict Cumberbatch as Doctor Strange, but sadly, this didn’t materialize.

What do fans actually think of the WandaVision finale?

The results are in, and fans have mixed feelings toward WandaVision‘s final episode. Some absolutely loved what director Matt Shakman and his team did with the end of Vision and Wanda’s love story. However, many fans also felt cheated that the “Luke Skywalker level cameo” promised by Paul Bettany turned out to be just another Vision.

Marvel fans were anxious to see who it could be — many speculated Ultron, Mephisto, Spider-Man, Aaron Taylor-Johnson’s Quicksilver, and even a resurrected Iron Man. However, fans were certain that Benedict Cumberbatch’s Doctor Strange would make an appearance. Not so.

Additionally, fans were super cheesed off to find out that Pietro Maximoff is actually just a dude with a semi-explicit name. Many were reminded of Iron Man 3 and how Kevin Feige and co. turned The Mandarin into a broke actor.

Sadly, this comes when fans become so invested in a series. We’ve loved theorizing alongside the community, and while some may be disappointed with some of the decisions regarding Pietro in particular, WandaVision ended on a huge high note. Let’s see what the folks on Twitter felt.

when we all thought we were getting xmen but all we got was ralph bohner #WandaVision #WandaVisionFinale pic.twitter.com/HSS31lebQb

WandaVision is a Disney+ exclusive series. It stars Paul Bettany as Vision, Elizabeth Olsen as Wanda Maximoff, Kat Dennings as Darcy Lewis, Randall Park as Jimmy Woo, and Teyonah Parris as Monica Rambeau. If you are not yet signed up for the streaming service, you can get started here.

Related: ‘WandaVision’: Who Is Monica Rambeau?

Breaking down the WandaVision finale

Episode nine tied up most loose ends, particularly regarding Agatha Harkness. Marvel fans were pretty worried that Kathryn Hahn’s Agatha might not make it. Marvel has a history of killing off its best villains, after all. However, the studio has obviously learned from past fan reaction and Agatha is alive, albeit trapped in Westview. The final dialogue between her and the Scarlet Witch also hints that she may return soon, perhaps even in Doctor Strange and the Multiverse of Madness.

Agatha may not be the only returning character, however. One of the two post-credits scenes features Wanda in two places at once. The first Wanda is dressed casually and sits outside a hut drinking coffee. However, when we head inside we can see that Wanda is actually projecting herself in two places at once. The Wanda inside is dressed in the Scarlet Witch outfit and is browsing through Agatha’s witch books. Excitingly, she hears the voices of Tommy and Billy call out to her. Could this signal their return to the MCU? Only time will tell.

Related: Who is Agatha Harkness in WandaVision?

The other post-credits scene

The other post-credits scene features Monica Rambeau talking to a Skrull. This will obviously lead on to the events of the highly anticipated Captain Marvel 2. However, we still don’t know how Monica has powers. Hopefully that movie will give us some answers.

Finally, we have to address Ralph Bohner. Fake Pietro was a big disappointment for many fans who were excited to see the multiverse being explored for the first time. Is Evan Peters definitely never returning as Wanda’s brother? That remains to be seen. However, Marvel may take fan reaction into account.

Matt Shakman, Jac Shaeffer, and Kevin Feige didn’t let us down with WandaVision. It was an exciting and successful step into the world of tv for the Marvel Cinematic Universe. Now we just can’t wait to start watching The Falcon and the Winter Soldier!

What did you think of the WandaVision finale? Let us know in the comments below.