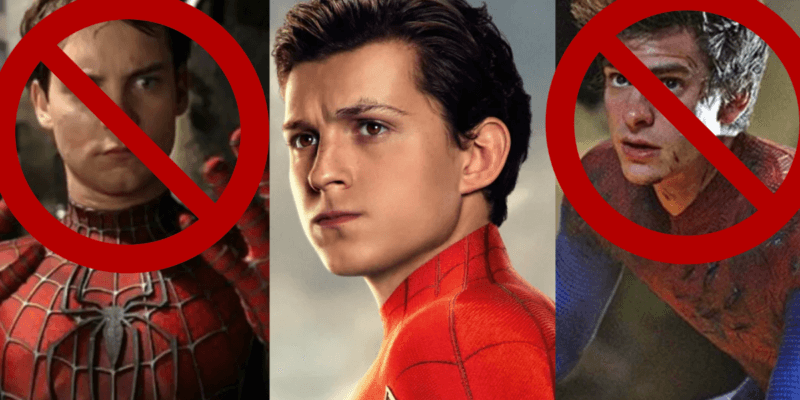 Spider-Man star Tom Holland has confirmed that, to his knowledge, Tobey Maguire and Andrew Garfield will not appear in the third movie.

The comments came during an interview with Esquire via IGN.

It runs counter to what we’ve heard of the film so far. It has been heavily rumored that both Maguire and Garfield would reprise their roles as Peter Parker/Spider-Man for a multiverse movie.

What did Holland say about Maguire and Garfield?

When asked if the two actors would be returning for the untitled Spider-Man 3, Holland had the following to say:

“No, no, they will not be appearing in this film … Unless they have hidden the most massive piece of information from me, which I think is too big of a secret for them to keep from me. But as of yet, no. It’ll be a continuation of the Spider-Man movies that we’ve been making.”

This means that, according to Holland, while Alfred Molina will return as Doc Ock and Jamie Foxx as Electro, the other actors’ respective Spider-Man characters will not. For fans of the Mark Webb and Sam Raimi series, this is quite disappointing. However, don’t put too much stock in what Holland has said. Disney and Marvel have a bit of a history of denying things to the press to make their reveals more impactful.

Is it curtains for Tobey Maguire and Andrew Garfield?

Don’t give up just yet. If Tobey Maguire and Andrew Garfield are truly reappearing, it’s unlikely that Disney would let Holland spill the beans. Especially with his history of giving away important plot spoilers at press junkets (a skill he shares with fellow Avenger Mark Ruffalo!).

With all the crazy casting rumors, including the possible return of Netflix’s Matt Murdock/Daredevil (again played by Charlie Cox, allegedly), we wouldn’t rule out their return just yet.

We know that Benedict Cumberbatch will return as Doctor Strange, filling the role of Peter’s mentor left by both Tony Stark and Nick Fury. It stands to reason that more Marvel cameos are on the horizon, mainly as Doctor Strange in the Multiverse of Madness will formally introduce the multiverse. That’s assuming WandaVision doesn’t get there first!

A recap on Spider-Man 3

The film we’ll call Spider-Man 3 will be a direct sequel to Spider-Man: Far From Home and it is currently untitled. As you may recall, at the end of that film Spidey was left in a sticky situation. A combination of JK Simmons’ J Jonah Jameson and Jake Gyllenhaal’s Mysterio outed Peter Parker as Spidey. It also framed him for the villain’s (alleged) death.

Since then, Marvel Studios has released some major casting announcements including the return of Alfred Molina from Sam Raimi’s series and Jamie Foxx from The Amazing Spider-Man 2. Fans therefore assume that the film will be a live-action version of Into the Spider-Verse.

Into the Spider-Verse was a hugely successful animated film from Sony, which brought together several versions of the web-slinger from across the multiverse. With WandaVision and Doctor Strange 2 seemingly focusing on the multiverse, it seemed logical that Tobey Maguire and Andrew Garfield would also return. This of course, could still happen as Holland could simply be lying. The Spider Man actor may be keeping the reveal under his hat to avoid ruining the surprise!

Who are Tobey Maguire and Andrew Garfield?

You may remember both actors as the stars of the previous two Spider-Man movie franchises. Maguire kicked things off in 2002 with Spider-Man, alongside Kirsten Dunst and Willam Dafoe. The Sam Raimi directed hit smashed the box office and was followed by Spider-Man 2 and Spider-Man 3.

As for Garfield, he starred in two films, both directed by Mark Webb. The Amazing Spider-Man starred Garfield, Emma Stone (as Gwen Stacy) and Rhys Ifans as Curt Conners/The Lizard. This was followed up just two years later with The Amazing Spider-Man 2, considered a low point for some Marvel fans. However, this movie is notable for introducing Jamie Foxx as Electro.

It was due to be the launch point for a whole host of sequels which never happened. Instead, Sony worked with Disney to incorporate Spider-Man into the MCU in Captain America: Civil War. Holland then reprised his role in Spider-Man: Homecoming, Avengers: Infinity War, Avengers: Endgame, and Spider-Man: Far From Home.

As for Holland’s comments to Esquire, only time will tell.

What do you think? Will Tobey Maguire and Andrew Garfield return? Let us know in the comments below.