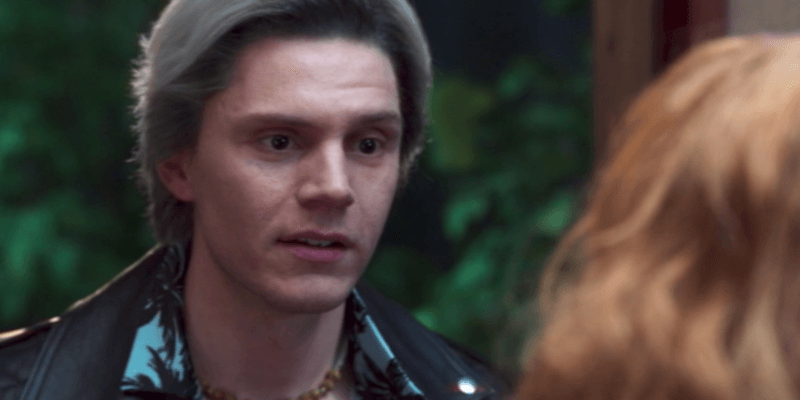 **SPOILERS for WandaVision Season 1, Episode 5 ahead**

In the latest installment of Marvel’s ode to the classic sitcom, On a Very Special Episode, fans followed Elizabeth Olsen’s Scarlet Witch/Wanda Maximoff and Paul Bettany’s Vision dive into disturbing truths about their idealized suburban lives. Not everything is so perfect, as we see Wanda and Vision’s twins, Billy and Tommy, unexpectedly age and the lies of Westview exposed — at least in part.

While Vision attempts to grasp the reality of their world, he concludes that Wanda is behind the madness. The point in the case, the confrontation with co-worker Norm after he taps into his psyche and the distressed character exclaims, “She’s in my head!”

In addition to Wanda, Agnes undoubtedly has a massive part in controlling Wanda’s world. Neither of the times witnessing the twins “aging up” did Agnes even blink, nor after overhearing the twins’ conversation bringing up Wanda’s powers. Kathryn Hahn’s character, Agnes, conveniently pops up when the twins won’t stop crying after Vision suggests they need some assistance.

On top of this, Wanda’s late-brother, Pietro Maximoff, is brought up in the episode twice — before he makes his surprise appearance. While Wanda is watching the twins, they ask her if she has a brother. The entire mood of the show shifts, and Wanda states that he’s far away. If she’s dodging the fact that Pietro died in Avengers: Age of Ultron or pondering bringing him back to life, the twins seem to instinctively know the truth about their uncle.

A small detail in Wanda’s mannerisms is that when she’s thrown off — like the SWORD helicopter and Beekeeper appearing in Westview — her mood shifts, and she appears completely dumbfounded. While it may be overlooked, Wanda is starting to lose control over her TV series.

However, the sudden return of her late-brother, Pietro Maximoff, threw off both Wanda and Vision.

In the Marvel Cinematic Universe, Wanda’s twin brother, Pietro (Aaron Taylor-Johnson), was killed in the Avengers battle in Sokovia in 2015’s Avengers: Age of Ultron. While protecting Avenger Hawkeye/Clint Barton from a spray of bullets, the speedster rushes in front of the bow-master and blocks Jeremy Renner’s character from getting killed by Ultron. Johnson’s portrayal of Quicksilver quickly became a fan favorite.

However, fans were shocked to see Evan Peters’ Quicksilver take the screen. Peters plays 20th Century Fox’s (now 20th Century Studios) Quicksilver in the X-Men franchise, speeding into X-Men: Days of Future Past (2014), X-Men: Apocalypse (2016), Deadpool 2, and Dark Phoenix. Peters, too, became a Marvel fan favorite after the audience got a firsthand look into how fast the mutant can run.

Up until now, Taylor’s and Peters’s Quicksilver characters lived in completely different universes. Now, however, Fox’s Quicksilver is officially part of the Marvel Cinematic Universe.

The multiverse could certainly be here. But, fans are questioning the true identity of Pietro Maximoff in WandaVision. Is he the same Quicksilver from 20th Century’s X-Men franchise? Is he Evan Peters’s Quicksilver, but not related to the same one from the X-Men: First Class Era?

After The Walt Disney Company’s historic acquisition of 20th Century Fox in 2019, fans began wondering if the House of Mouse would “retcon” Fox’s X-Men.

Much like the current “retcon” rumors about Star Wars: Episode VIII – The Last Jedi, the X-Men, and The Fantastic Four, the mutants’ timeline would be rewritten within the MCU, and fans would encounter a new class of X-Men.

However, a small detail in WandaVision suggests that Disney won’t retcon Fox’s X-Men.

If you turn on audio descriptions on Disney+, the commentary states, “Wanda starring at the version of Pietro from the X-Men films.”

We could be getting ahead of ourselves, but why would Marvel and Disney include Fox’s Quicksilver in the MCU and not bring in pre-existing Mutant characters, like Jennifer Lawrence’s Mystique or Michael Fassbender’s Magneto.

Could you image Fassbender’s Magneto and Loki (Tom Hiddleston) sharing the screen?

Of course, this is a tiny detail, and the audio description is written for those unable to see which Quicksilver is standing in front of Wanda.

If Disney planned on scrapping Fox’s mutants, Evan Peters wouldn’t be standing in front of Wanda.

Do you think Fox’s X-Men will be in the MCU? Let us know in the comments below!