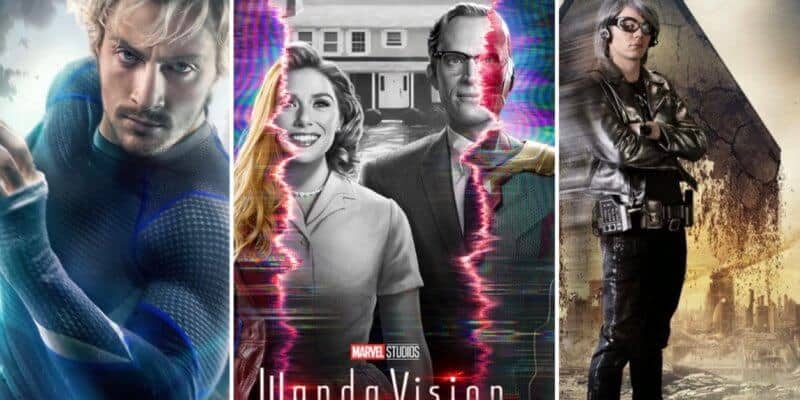 The multiverse might be a new concept in the Marvel Cinematic Universe, but the comics have used alternate realities and timelines in for as long as they have existed. Marvel first opened the possibility of alternate realities in 2019’s Avengers: Endgame, when Bruce Banner (Mark Ruffalo) asked the Ancient One (Tilda Swinton) for the Time Stone.

It was hinted again in Spider-Man: Far From Home, when Mysterio (Jake Gyllenhaal) claimed to have come from another universe. Now, in Marvel’s first Disney+ series, WandaVision, the gates to the multiverse have been opened with the introduction of a version of Quicksilver previously not seen in the Marvel Cinematic Universe.

To help keep it all straight, here is a quick rundown of some of the most relevant versions of Quicksilver.

Quicksilver From the MCU

Portrayed by Aaron Taylor-Johnson in Avengers: Age of Ultron (2015), Pietro Maximoff and Wanda are twins who grew up in Sokovia. He started off as a villain, radicalized after the death of his parents. He joined HYDRA and Strucker experimented on him with the Mind Stone. Pietro gained the ability to move at supersonic speeds.

The MCU’s Quicksilver and Wanda teamed up with Ultron to fight the Avengers. They blamed Tony Stark/Iron Man (Robert Downey Jr.) for their parents’ deaths. Eventually, when Ultron decided to wipe out all of humanity, the Maximoff twins changed sides. Pietro died saving Hawkeye/Clint Barton (Jeremy Renner) in his only film appearance in the MCU.

Quicksilver From the X-Men Films

In Fox’s X-Men: Days of Future Past (2014), Evan Peters played Peter Maximoff. He helped Wolverine (Hugh Jackman) break Magneto (Michael Fassbender) out of jail to prevent the post-apocalyptic wasteland seen in the film. Peter, like the other X-Men, got his powers from the mutant x-gene.

While he is Wanda’s brother, the Scarlett Witch never appears in Fox’s film franchise. Peter is canonically the son of Magneto, and he shares this with his comic book origins.

It is important to note, though, that he did not know it at the time of Days of Future Past and did not have much interaction with him in the X-Men films.

Quicksilver From the Comics

Pietro first appeared in Uncanny X-Men #4 (March 1964).  Comic origins change all the time, but traditionally he is a mutant.

However, originally, The High Evolutionary kidnapped and took the twins to live on Wundagore Mountain and his experiments gave them their abilities. Later, Marvel revealed that Magneto was their father.

Pietro is a sometimes villain, sometimes hero. He founded the Brotherhood of Evil Mutants with his father Magneto and manipulated Wanda during the House of M storyline, which influenced some aspects of WandaVision. But Pietro was also an Avenger, helping to save the world a restore mutant abilities.

Tommy is often confused with Quicksilver, and even briefly went by the name in an alternate timeline in the comics. His origin is by far the most complicated.

After the revelation that Tommy Maximoff and his twin brother, Billy, were not real, the constructs that Wanda created vanished and it drove her insane. Tommy was reincarnated as Tommy Shepherd and like Pietro, he can move at super-speed.

But, he also has the power of molecular acceleration, which allows him to vibrate the molecules of objects until they explode. In the comics, this landed him in jail after he vaporized his school. The Young Avengers along with his brother Billy later rescued him.

Tommy as he appears in WandaVision has yet to display any superhuman abilities other than the sporadic jumps in aging.

The version that appears at the end of the fifth episode of WandaVision, played again by Evan Peters, appears to be the same as the one he played in the X-Men films. He doesn’t even know who Vision is, while the version played by Aaron Taylor-Johnson met him in Age of Ultron. This finally opens the multiverse in the MCU.

Now the question remains, how and why is he there? How do you think Tommy will eventually play into the Marvel Cinematic Universe multiverse?