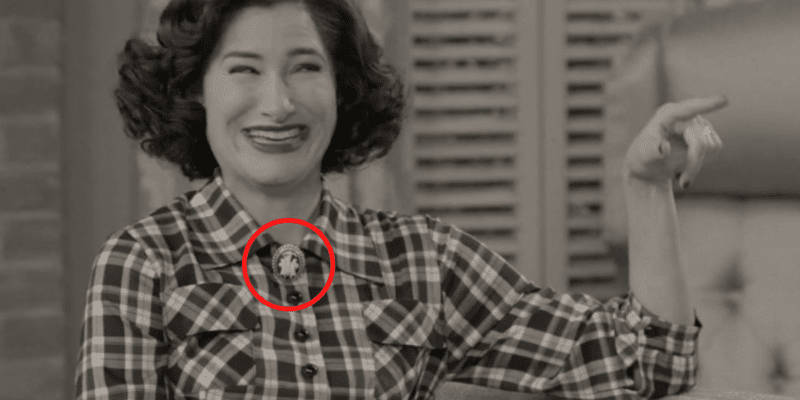 WandaVision debuted on Disney+ nearly one month ago, and since then, Marvel fans can’t stop talking about Marvel’s newest venture. There are enough hidden details in each episode to fill a textbook, but there is one major detail fans may not know about.

Watch out for Agnes. The character “Quirky Neighbor,” played by actress Kathryn Hahn, is Wanda and Vision’s mysterious neighbor in Westview. Up until episode four, “We Interrupt This Program“, no one knew what was going on with her — or the entire series, for that matter.

The new episode’s real stars were FBI agent Jimmy Woo (Randall Park) and the sassy astrophysicist Darcy Lewis (Kat Dennings), who was last seen in Ant-Man and the Wasp and Thor: Dark World, respectively. The duo acts as the audience’s surrogate as they’re piecing together every detail from WandaVision‘s debut and connecting the dots.

Did you notice anyone missing from the board of New Jersey citizens identified as characters from Wanda’s sitcom? Like, maybe, Agnes?

Not Your Average Neighbor

Technically, she was on the board, but no one mentioned her actual identity. She’s the only citizen of Westview without a New Jersey driver’s license attached to her page.

While it’s unconfirmed, fans suggest that the nosy neighbor is none other than Agatha Harkness, one of the original witches from the Salem Witch Trials. According to one Twitter user, there’s more than enough evidence from the first episode alone that Agnes isn’t your average, friendly neighbor.

The only way Ralph would remember our anniversary is if there was a beer named June 2nd.

The line was overlooked and quickly forgotten, but there’s a tiny detail worth noting. Funny enough, June 2, 1692, is the date U.S. courts first gathered for the Salem Witch Trials. However, who’s her husband? We don’t yet know.

Related: Agatha Harkness Might Get a Major Villain Role in “Wandavision”, but Who Is She?

On top of that, take notice of Agnes’ brooch, one she’s worn throughout each episode. In “Now In Color“, the character wore it as a necklace and was attempting to censor Herb, Wanda and Vision’s clumsy neighbor.

Marvel Fans were quick to spot that the brooch she’s wearing in WandaVision resembles the one that’s drawn onto Agatha Harkness in the Fantastic Four Marvel Comics from 1972. Reddit fans noticed that the pendant looks like the Grim Reaper with two children — which is pretty dark on Marvel’s part. We haven’t gotten a close enough shot to study her brooch, but if that’s the case, it sounds like Agnes is a dark lady.

What’s disturbing is that she hasn’t appeared without the pendant and continues to pop-in at pivotal moments.

In a WandaVision trailer, the titular Vision was strolling through Westview on Halloween night without a disguise and found himself stopped by his “Quirky Neighbor” Agnes, who was dressed up like a witch. Bingo, folks.

While the television sitcom is giving a nod to a previous Marvel comic book, Kathryn Hahn’s character is giving away a huge plot point for Paul Bettany’s Vision.

While the television sitcom is giving a nod to a previous Marvel comic book, Kathryn Hahn’s character is giving away a huge plot point for Paul Bettany’s Vision. While it’s unconfirmed, it’s reported that the Halloween special will take place in episode six of WandaVision and we’ll hopefully get more context about this scene.

What’s truly chilling is that the witch exclaimed that Vision is dead and cackled. In the trailer, Agnes appeared to be frozen in time or transfixed. As Vision approached her stopped car, he touched the side of her head, and she snapped out of the apparent trance.

Up to this point, Wanda and an adult Monica Rambeau, who functioned as an undercover SWORD agent in Westview, are the only characters aware that Vision died in Avengers: Infinity War. It was a low blow by Rambeau to mention Quicksilver’s death by Ultron, but it doesn’t seem like she’s the only one who knows.

It’s unknown if Wanda herself or some otherworldly power is in control of WandaVision, but Agnes seemingly has a part in orchestrating the augmented reality.

While Herb is trimming his hedges, for example, he slices into a brick wall. I’m not sure if that blade was made out of Virbranium, but something is going on with the citizens of Westview. Herb then trips over his own words and repeats himself like a broken record when Vision asks what’s going on. Herb snaps out of the trance and shrugs it off.

Okay, but what’s the big idea? Later in episode three, Agnes suddenly popped up at the Vision residence and was whispering with Herb. Vision asked if everything was all right and Herb nearly spilled the beans until Agnes shut him down.

She then switched the subject to Geraldine — an undercover Monica Rambeau from the outside world. It was a pivot, but one that hid what Agnes and Herb were whispering about. Geraldine was then put into question by both Wanda and Agnes.

While it’s unconfirmed, Agnes knew Geraldine’s true identity and whereabouts. And, not wanting to spoil the fun, made it appear that Geraldine was a bad apple. Thanks to Wanda, she’s wiped from existence, and the case is closed. For now, at least.

A Good Witch or a Bad Witch?

In the Fantastic Four and Avengers comics from 1972-1974, Agatha Harkness is somewhat of an anti-hero. While she’s not against the Avengers, her history and powers are darker than what some would like to see in a Marvel story.

While it’s uncertain if the “Quirky Neighbor” is, in fact, Agatha Harkness and what role she plays in the Disney+ series, Agatha was Wanda’s mentor in the comics. Quickly forming a strong bond, the two shared their powers for the good of humanity.

Unfortunately, Harkness was killed by New Salem citizens and later appeared as a ghost to Wanda throughout the comics.

Marvel hasn’t released any information about Agnes for a reason, but if she is who fans suggest, then there’s something scary going on in Westview.

Who do you think Agnes is? Let us know in the comments below!