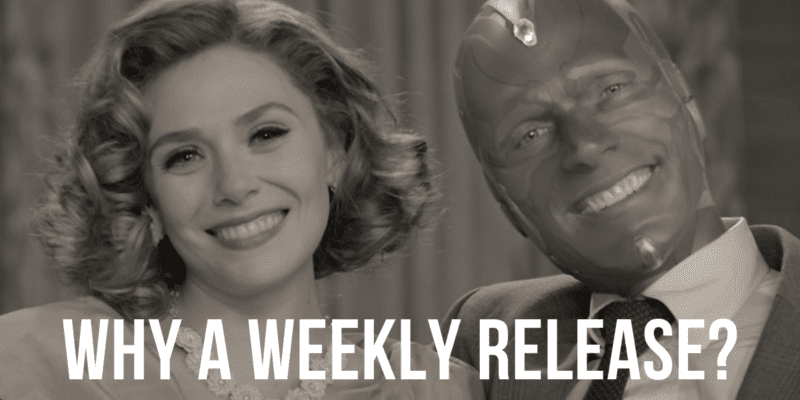 WandaVision‘s episode structure has led some fans to feel pretty impatient. Much like its Star Wars Disney+ series, The Mandalorian, the team behind the MCU series opted to schedule a weekly release schedule.

WandaVision‘s episode structure is a weekly release schedule (with new episodes debuting on Fridays). From Disney and Marvel Studios’ point of view, you can see why this works. Without the ability to “binge-watch” everything on Disney+ in one go, audience anticipation can build. It’s a tactic we’ve seen other streaming services like Amazon Prime take with shows like The Boys.

Notably, it’s also something Disney has rolled out before with the hit Disney+ series, The Mandalorian. It’s no surprise that the Marvel Studios team has the same methodology. Per Playlist:

“When we were early, early working on [WandaVision], it wasn’t known what the rollout would be […] So, the question was less about the binge-ability or dropping them weekly, it was more about how long can we keep the sitcom gig going? How much to reveal about the larger mystery? How much will be in the MCU space versus how much will be in the authentic sitcom space? That was always a question. And a concern, really. But we were all very unified in seeing how far we can take it. And if we could truly create a sitcom featuring [Wanda and Vision].”

Why are WandaVision fans impatient?

In this age of streaming, Marvel Cinematic Universe fans expect to have the entire series at the tip of their fingers. Streaming services like Netflix have made it commonplace for viewers to be able to binge at will.

Of course, the anticipation builds each and every week as fans must wait to find out what’s going on in WandaVision. The series has prided itself on being mysterious and weird, and although Episode 4 cleared a few things up, we still don’t know the details.

People aren’t hesitating when expressing their feelings as many fans have taken to Twitter to express how anxious they are for more. However, as Schaeffer says:

WandaVision is available to stream on Disney+, exclusively. It is directed by Matt Shakman and stars Paul Bettany and Elizabeth Olsen as Wanda Maximoff and Vision. Other stars include Teyonah Parris, Kat Dennings, and Randall Park.