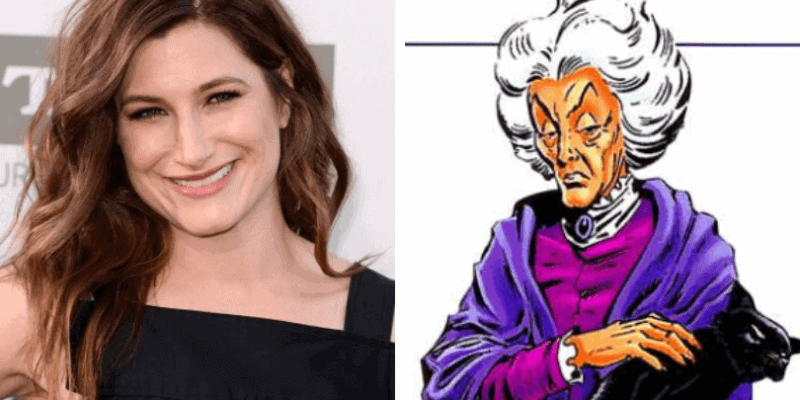 WandaVision, one of the most anticipated installments for Marvel Phase 4, is moving further and further through production. But more and more questions remain unanswered, including one lingering question: Who is the main villain?

Recent set photos appear to confirm that a major villain will be Agatha Harkness, and she will be played by Katheryn Hahn cast as Agnes. When she was first introduced as a cast member, Hahn’s character was simply described as a “noisy neighbor.” Kevin Feige introduced Hahn saying, “What does every sitcom need? A nosy neighbor! There’s always a nosy neighbor that’s stirring up trouble.”

In the photos Hahn appears to be on the set of WandaVision wearing a witch-like costume. Fans are hoping this means that Hahn will be playing comic book baddie Agatha Harkness. If this is proven to be true, that would definitely create a lot of noise in the neighborhood.

2 months to the day after originally publishing this prediction WandaVision episode 7 of WandaVision finally confirmed the rumors that Agnes (Kathryn Hahn) is in fact Agatha Harkness. As we have also shared the little hints that WandaVision dropped along the way actually pointed to the true identity of Agnes. It’s yet to be seen if she is the only villain as we’ve also theorized that Ultron may have returned too.

Who is Agatha Harkness?

Let’s talk about Marvel Villains for a minute. In Marvel Comics Agatha Harkness is a powerful witch, one of the original witches from the Salem Witch Trials. She’s sometimes a villain and has on occasion helped out the Avengers and even trained Scarlet Witch.

She is in-league with an even bigger baddie, Nightmare. Nightmare is rumored to be the ultimate antagonist in the upcoming film, Doctor Strange and the Multiverse of Madness. Fans are already expecting to see Scarlet Witch in the Doctor Strange sequel. So, it would make sense to see the villains’ story extend into the Disney+ series. In The Fantastic Four and Avengers marvel comics from 1972-1974, Agatha Harkness is somewhat of an anti-hero. While she’s not against the Avengers, her history and powers are darker than we typically see in a MCU story.

In the comic book realm, Agatha Harkness is also old. Really old. Harkness has three major confrontations with Wanda (Scarlet Witch), and Wanda has to kill Agatha at least twice. Agatha also appears in the Fantastic Four comics as a governess for newborn, Franklin Richards.

Long story short, this sorceress is very fast and very powerful in all realms of sorcery. But, one quick look at Katheryn Hahn’s repertoire will tell you this sharp, sassy actress would be perfect for the role.

Does this rumor hold any weight? Do you want Katheryn Hahn to play Agatha Harkness? Let us know in the comments!