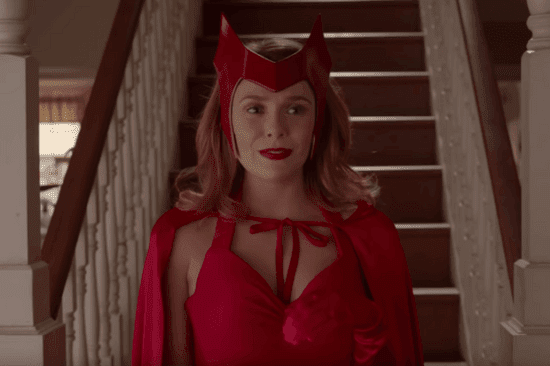 WandaVision is the first Marvel series for Disney+. It sees Manda Maximoff and Vision living in a dystopian version of American sitcoms throughout the decades. Recently Elizabeth Olsen gave an interview in which she addressed the biggest questions fans had for the series — who is the villain?

Marvel Comics has so many iconic villains that fans are waiting to see make an entrance into the Marvel Cinematic Universe. But will WandaVision have a villain that ties the series into the MCU? We know that WandaVision is connected to the upcoming Doctor Strange movie, Doctor Strange in the Multiverse of Madness — and MCU fans will have to watch WandaVision in order to be fully caught up by the time they see Doctor Strange 2.

Recently, Elizabeth Olsen did an interview during which she addressed the villain question for WandaVision fans, hinting that the show may not even have one:

“Someone said to me when you watch any of these hero movies, you know when the villain’s about to show themselves, and you also have an idea of who the villain is. With our show, you don’t know what the villain is, or if there is one at all,” Olsen said. “Wanda is trying to protect everything in her bubble, protect what she and Vision have and this experience. I think everything she does is in response to keeping things together.”

Elizabeth Olsen has also said that WandaVision is a “blank slate” for Marvel. And that when Kevin Feige told her about the sitcom premise it didn’t seem strange at all:

“When Kevin [Feige] told me, it didn’t feel so bizarre. It felt like a great way to start our story.”

Some fans have speculated about who the villain will be in WandaVision and many believe it will be Mephisto. But Marvel, as we know, is very good at keeping us on our toes, and I believe we could be totally surprised with who the main villain turns out to be…if there even is one!

Who do you think the villain is in WandaVision? Let us know in the comments!

Comments Off on Does ‘WandaVision’ Have a Villain? Olsen Hints There May Not Be One!