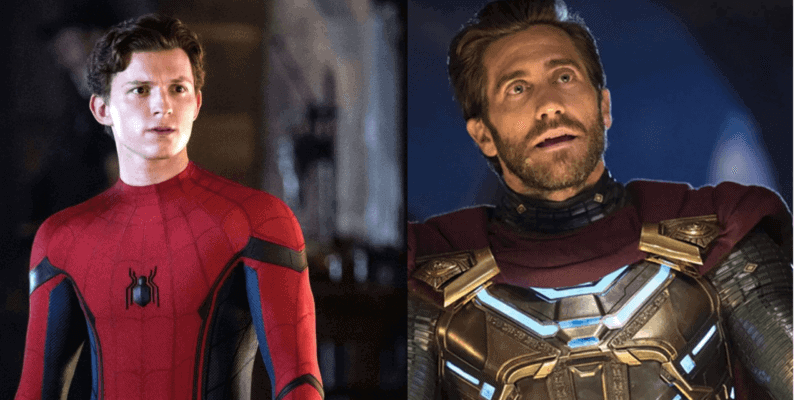 After the supposed demise of Mysterio in Spider-Man: Far From Home fans have been questioning whether or not Mysterio (played by Jake Gyllenhaal) was actually dead or whether it was another one of his clever illusions. This wouldn’t be the first time that the character has faked his death (having done so several times in the comic books) so it isn’t beyond the realms of possibility that Mysterio could make a return.

What sparked this conversation on Twitter and led to the character trending was a new set photo being posed that showcased several posters on a wall featuring the iconic fishbowl helmet of the character. You can check that out below:

all I see is the mysterio posters and one that says “we remember” with someone being dusted pic.twitter.com/9WHHM9Nfe8

Now, this could simply mean that there are those on the side of Spider-Man and those that sit on the side of the recently deceased Mysterio but it would feel a bit harsh of Marvel and Sony to kill off one of the best villains that Spider-Man has in his first movie debut.

Given it’s certainly a possibility that he will return in Spider-Man 3, fans are understandably getting a little excited:

Mysterio is trending and I’m glad because as I’ve said a thousand times now he is the best Spider-Man villain and up until Far From Home far too many people were sleeping on Quentin Beck ??‍♀️ pic.twitter.com/xhr1xmUpFz

After today with the Spidey set photos, ive realised Mysterio was right. Yall WILL believe anything ? pic.twitter.com/MnXSocND0y

While there have been many rumors about the upcoming Sony/Marvel Spider-Man sequel, we have seen very little confirmed by the likes of Kevin Feige so far. He has mentioned that some of the rumors surrounding the movie are true which could mean anything from the introduction of the live-action Spider-Verse to the return of villains like Mysterio.

We’re excited at the prospect of seeing a great Spider-Man villain return and certainly feel that Mysterio has a lot more that he could bring to the table, especially given the prospect of a Sinister Six movie further down the line involving characters like Doctor Octopus, Electro, The Vulture and Scorpion. All certainly possible with the rumors of the multiverse beginning in Spider-Man 3 and Doctor Strange being in the movie.

What do you think of bringing back Mysterio in Spider-Man 3? Let us know in the comments below!