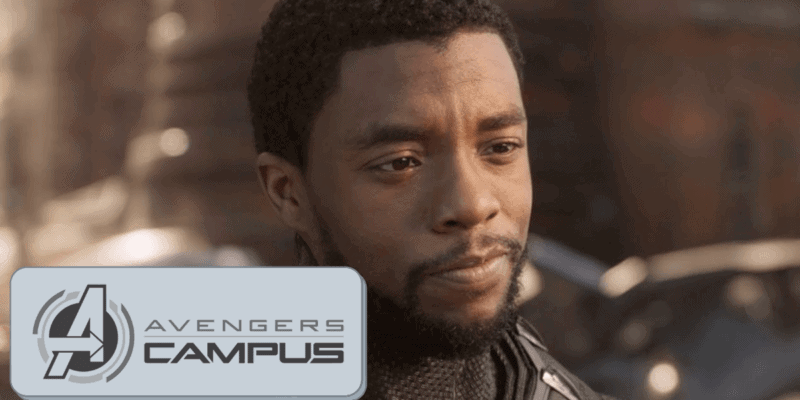 An online petition on Change.org recently popped up to suggest that Walt Disney World should feature a Chadwick Boseman statue.

While this certainly isn’t out of the realm of possibility, we think there’s a much more fitting place for a tribute.

Here’s why this reporter thinks any or all of the upcoming Avengers Campus sites should install the statue instead.

A monument to a fallen King

The creator of the change.org petition suggests that a memorial monument is the best way to honor the late Marvel star. For those who don’t know, the actor sadly passed away last year after a prolonged battle with colon cancer. The online petition creator reaffirms that Boseman was a strong Black role model for children around the world, but particularly young Black people. They therefore feel it’s important to honor his contributions to both the Marvel Cinematic Universe fandom and Black community with a monument.

It’s true, Boseman was regarded as an American treasure and a true local legend. The actor’s hometown of Anderson, South Carolina has reportedly already started work on a statue in honor of his memory. Yet, Boseman’s career went beyond the Mouse. The actor was a big presence in the movie industry and starred in films like 21 Bridges, Get On Up, and 42, in which he portrayed Black icon, Jackie Robinson.

However, Disney definitely played a big part in Boseman’s life, so it seems only fitting that a statue is erected in his honor at one of the parks. Furthermore, Chadwick Boseman’s early passing was tragic for Marvel fans in particular. A hypothetical statue in memorial of the star at a Marvel land is something many fans can get behind.

Avengers Campus is coming in 2021

Its delay has been severely delayed thanks to the ongoing pandemic, but Avengers Campus is on the way. The first iteration of the land will feature in Disney California Adventure park, with versions set to launch at Paris’s Walt Disney Studios Park and Hong Kong Disneyland. Notably, the Hong Kong park will go by “Stark Expo” instead. Disney confirmed Avengers Campus is opening at Disney California Adventure in 2021.

With Marvel-themed lands finally on the way at three of the major parks, it seems most likely that if Disney were to create a tribute to Boseman, it’d be here. As you may know, there was already a tribute to the actor at Disneyland Resort. A mural titled “King Chad” was designed by former Disney Imagineer and current concept artist Nikkolas Smith, and it was unveiled at the Downtown Disney District in fall 2020.

It only seems fitting to implement a statue remembering Boseman in an area influenced by the Marvel Cinematic Universe. The hypothetical Chadwick Boseman statue could therefore stand proudly in the center of the theme park. It could be a pivotal stop for Marvel fans, alongside other attractions like Guardians of the Galaxy: Mission BREAKOUT! and WEB SLINGERS: A Spider-Man Adventure.

Boseman’s death hit Marvel fans hard in 2020. The actor died at the tragically young age of just 43, yet he left behind an incredible legacy of work that redefined the superhero industry. Fans of the Marvel Cinematic Universe will remember him as T’Challa / Black Panther, where he starred in Captain America: Civil War, Avengers: Infinity War, and Avengers: Endgame.

However, among Marvel fans, he will be best known for his starring role in 2018’s Black Panther. The film received universal praise and was a huge hit with fans and critics alike. It was Boseman’s performance that bought it all together and helped fans fall in love with the fictional country of Wakanda.

Note that Disney has not given any indication that a Chadwick Boseman as Black Panther statue will be built for Avengers Campus at Disneyland Resort (or any other Disney Park). However, if Disney is to listen to this petition and erect a Chadwick Boseman statue, it seems natural that they put it at Avengers Campus. We can’t think of a better monument to honor the fallen Marvel King.

You can sign the petition to create a Chadwick Boseman memorial at Walt Disney World here.

What do you think? Is a statue a fitting monument to Boseman’s life? Let us know in the comments below.