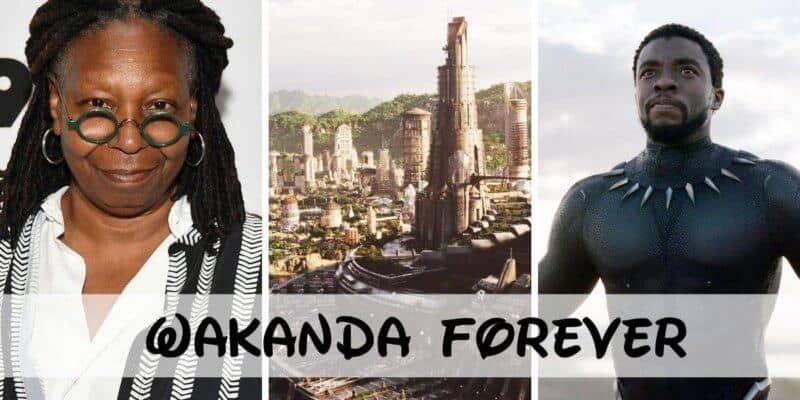 Whoopi Goldberg has called for The Walt Disney Company’s theme park division to create a Wakanda theme park in honor of Chadwick Boseman.

Goldberg calls for park based on Marvel country

In a tweet published today, Whoopi Goldberg has called out Disney and requested a Wakanda themed park. She has suggested that a park based on the technological and fictional country from Black Panther would be ideal theming for a Disney Park.

More importantly, the park (or perhaps a land within an already existing Disney theme park) would act as a memorial to Chadwick Boseman, the Black Panther actor who pioneered diversity in the Marvel Cinematic Universe by starring as the first Black hero to lead his own movie.

Boseman sadly died in August of 2020 after losing a long fought battle with colon cancer. Check out Whoopi Goldberg’s tweet, in which she says Disney shouldn’t create a land based on Frozen but instead build a Wakanda land:

Dear People in charge of building NEW experiences Disney Land and World we don’t really need another Frozen land BUT what we could use is Wakonda, please Disneyworld Disneyland PLEASE build in Chadwick Boseman’s name WAKONDA

‘Dear People in charge of building NEW experiences Disney Land and World we don’t really need another Frozen land BUT what we could use is Wakanda, please Disneyworld Disneyland PLEASE build in Chadwick Boseman’s name WAKANDA’

Goldberg is of course no stranger to the Disney brand. She has starred in a number of Disney movies including Toy Story 3, The Lion King, and the 1997 version of Cinderella starring Brandy.

Related: When Will The Walt Disney World Water Parks Reopen?

Could a Wakanda theme park or land become a reality?

The shocking and sudden death of Boseman has hit the Marvel fanbase hard. The final tweet shared on Boseman’s page quickly became the most liked tweet of all time, while sales of Black Panther have seen the film near the top of the VOD charts once again. Boseman made history by being the first Black man to lead a movie based on a Marvel comic with 2018’s Black Panther. The legendary actor then starred in Avengers: Infinity War and Endgame, where the superhero played an essential role in taking down Thanos.

We know that a Marvel expansion is in the works at Disney California Adventure park and heroes from Wakanda are confirmed to be at least feature. Here’s what Disney said on Twitter about the new land coming to DCA:

“…Find heroic encounters throughout the Avengers campus, including Black Widow, Ant-Man and The Wasp, Doctor Strange, the Guardians of the Galaxy, Super Heroes from Wakanda and Asgard, and Iron Man.”

Could Boseman’s passing compel Disney to give Avengers Headquarters and the rest of the park a Wakandan makeover while still featuring other Avengers? Its emphasis on technology and African culture would sure make for some impressive set-pieces.

Disney fans have longed for a Wakandan themed park for a long time, but we’ll have to wait and see how Disneyland Resort in California chooses to incorporate the African country and whether Goldberg’s plea has any impact. If it does, we can definitely see imagineers having some fun designing this amazing Disneyland park; a Wakanda park on the scale of Galaxy’s Edge would be a sight to see!

Only time will tell. Wakanda forever.

Related: Every U.S. Theme Park and Amusement Park Closing Due to Coronavirus