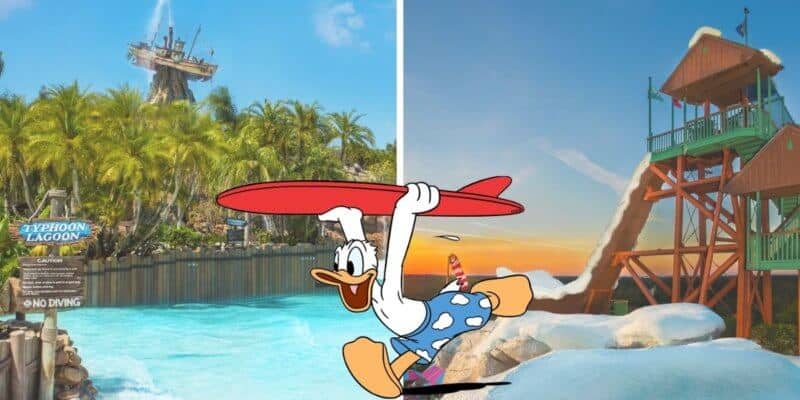 This article has since been updated with the most up to date information.

Now that Walt Disney World has begun its phased reopening of its theme parks, people have been wondering how the Orlando Resort will handle the water parks.

Though the Walt Disney World Resort has yet to announce an official reopening date for its Disney water parks, let’s breakdown everything we know thus far including what the CDC is saying about the virus and public pools, what Governor Ron DeSantis has stated regarding Disney’s water parks, and how Universal Orlando is handling the reopening of their water park, Volcano Bay.

What The CDC Is Saying

On Wednesday, May 20 the U.S. Centers for Disease Control and Prevention shared new guidelines for swimming pools during the current global pandemic. The new guidelines share that although there is no evidence that connects the spread of the virus through water, it is still important to take proper health and safety precautions moving into the summer months.

“There is no evidence that the virus that causes COVID-19 can be spread to people through the water in pools, hot tubs, spas, or water play areas,” the CDC stated on its website. “Proper operation and maintenance (including disinfection with chlorine and bromine) of these facilities should inactivate the virus in the water.”

However, the CDC also wants to remind individuals to take precautions. “While there is ongoing community spread of the virus that causes COVID-19, it is important for individuals as well as owners and operators of these facilities to take steps to ensure health and safety.”

Vice President Mike Pence met with Florida Governor Ron DeSantis during a Florida tourism roundtable back in May. During the meeting, DeSantis brought up the conversation of water parks including Disney’s Blizzard Beach. DeSantis stated that in his eyes, these water parks are “pretty low risk” since the CDC stated that the virus is unlikely to be trasmitted through water.

With Universal Orlando getting approval to reopen its theme parks beginning on June 5, it’s leaving many to wonder about their water park — Volcano Bay.

Universal Orlando has announced that along with its theme parks, Volcano Bay would also be opening up on June 5. Along with the opening, comes may questions including these FAQ’s on Universal Orlando’s website.

How will you implement social distancing guidelines at Universal’s Volcano Bay?

Overall, Universal’s Volcano Bay will follow the same guidelines and procedures as the other theme parks. Some of the specific measures we’re taking to implement social distancing at Volcano Bay include:

At Volcano Bay, will I have to wear my face covering while on the slides?

Face coverings are recommended when guests cannot socially distance. They will not be permitted on slides and in pools.

Face coverings are required for team members in “dry” roles. Team members who have “wet” roles, such as lifeguards, will wear a balaclava when they cannot socially distance. These will not be worn on slides or in pools for safety reasons.

What Does This Mean For Blizzard Beach and Typhoon Lagoon?

Seeing Universal Orlando reopen Volcano Bay along with both of its theme parks, and knowing that Governor Ron DeSantis supports the idea of reopening water parks, we know that when Walt Disney World decides to initiate the reopening of Blizzard Beach and Typhoon Lagoon, that they will be extremely safe for both the guests and cast members.

We also expect Disney World to follow similar guidelines when they reopen their water parks — Blizzard Beach and Typhoon Lagoon — including the recommendation of face coverings, social distancing guidelines, and more.

Keep in mind if you plan on visiting Walt Disney World Resort, there have been a lot of protocols put into place to keep the guests and cast members safe. These include temperature check upon entering the Disney theme park, social distancing measures, excessive cleanliness, encouragement of mobile orders, increase in hand sanitizer stations, plexiglass, the elimination of character meet and greets, parades and fireworks, and more.

There are also changes to the FastPass+ system and the PhotoPass System along with changes for previously bought tickets including refunds and exchanges. There also will be no park hoppers or resort hopping available.

Would you feel comfortable visiting the water parks at Walt Disney World when they reopen? Let us know in the comments.