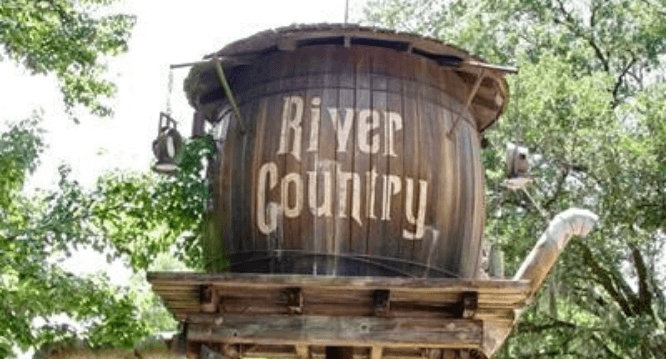 River Country was Walt Disney World Resort’s first foray into water parks in 1976. Sitting on a mere 6 acres of land near Discovery Island, River Country boasted tire swings, inner-tubing through man-made rapids, water slides, and a swimming area that was fed with water from the adjacent Bay Lake. Imagineers designed the Park to be slightly elevated resulting in an illusion spillover effect as only filtered lake water filled the Park, leaving excess spilling back into Bay Lake, This kept Disney’s River Country water clean at all times. River Country Water Park was a shining star of Disney Parks for many years, but now you can only find one last piece of it: The River Country Water Tower.

The “ol’ swimmin’ hole” known as River Country operated for a number of years but had its own challenges. To reach it, theme park Guests needed to board the Fort Wilderness Railroad once they reached Fort Wilderness Resort Campground in order to arrive at the Park entrance. The Park could only hold a small 5 thousand guests, compared to its later siblings. Combine this with the unfortunate 2 drownings and single amoeba death, it couldn’t keep up with the attractive installments of Typhoon Lagoon (1989) and Blizzard Beach (1995)

River Country became a perk for Guests at Disney’s Fort Wilderness Resort instead of a destination water park when the train system shut down in 1980. In 2001, when the World Trade Center was attacked, tourism had a heavy downturn that affected Walt Disney World among other destinations. The decision to not reopen River Country for its 2002 season was made. Seeming indefinite, the closure sparked rumors of why it closed, although there was no statement from Disney. Disney’s first water park was fully intact as Mother Nature began her takeover. In 2005, it was made clear that the park would never again reopen.

Urban explorer guests risking being banned for life from Disney Parks (and they were) broke onto the grounds of River Country from the Fort Wilderness Campground to find lost Cast Member items, a mostly intact Park, broken slides and green pools. Now, the Orlando waterpark pools have been filled with sand and construction is beginning to take place, leaving mostly memories of its once prime amusement park crowd.

This charming documentary was made a few years ago by fans. It gives a great history of the water park in its heyday. ou can see Whoop ‘n Holler Hollow, the classic tire swing, and folk’s favorite attraction, Slippery Slide Falls(two water slides dripping off rockwork). What it’s missing is the later demolition of the BBQ area and construction budding at Fort Wilderness that occurred after the editing of the clip.

The Last of River Country

Visitors to Fort Wilderness in the last handful of years were able to visit and dine at Mickey’s Backyard BBQ. The entrance sign was actually an old repurposed River Country sign that welcomed guests back to Fort Wilderness, but you can still see the rip roarin’ portion which was original to the design. Those that checked in for the BBQ would have also done so at the old ticket booths, though signage was mostly removed. Even the restrooms for the BBQ had wall-mounted hairdryers and a portioned off area for showering after swimming. Since the new Reflections – A Lakeside Disney Lodge is being built near this parcel of land as well as the expansion of Fort Wilderness, the BBQ buildings were demolished for the new hotel.

The very last remnant from the original waterpark can be found at the Fort Wilderness Lodge main pool. Literally towering above the water line is a water slide created from the River Country Water Tower in 2009. Removed from the front entrance of the water park, it was refurbished, painted and used as the centerpiece of the new water slide. There is no memorial tablet to tell you this fun fact, but Disney Parks fans will recognize the emblazoned logo on the front of the tower.

While ferry guests have been able to discern specialized fences on their boat ride over to Magic Kingdom, the last bits of River Country were able to be seen every day on this watery journey. As the expansion of Fort Wilderness and Reflections near, these historical items taken over by nature are quickly fading into the past.

Have you been to the Fort Wilderness Resort Pool and seen the River Country Water Tower? Did you seek it out as the last remnant of the waterpark, or perhaps you didn’t know what you were looking at until now? More lost photos of River country can be found here!