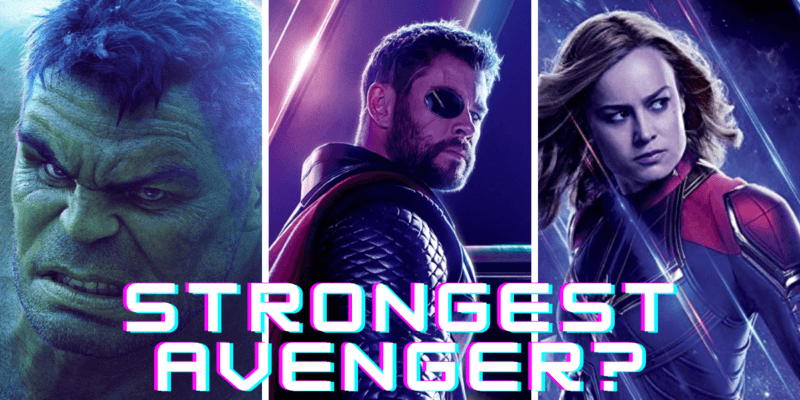 In Thor Ragnarok there’s an amusing moment where Thor declares himself the strongest Avenger, only to be rejected by the Quin Jet who instead gives that honor to Bruce Banner / The Incredible Hulk.

The question got Marvel fans thinking though — Who is the strongest Avenger? Let’s break down some of the options and see where the Marvel Cinematic Universe may differ to the Marvel Comics canon.

Thor is a good contender for the team’s strongest Avenger

Both in the comics and the movies, the mighty Thor is indeed a force to be reckoned with. This norse God / alien is thousands of years old, super strong, and holds the power of lightning and thunder in his hands. Thor is pretty consistent with his comic counterpart, and Hemsworth‘s superhero certainly makes a good case as the Avengers team‘s strongest superhero.

However, we have seen Thor falter a bit. He was beaten by Thanos in the prologue of Avengers: Infinity War and he even admitted that he was incapable of defeating his sister Hela, which led him to allow Surtur the fire demon to decimate Asgard instead.

The character also ‘lost his mojo’ following his inability to prevent the snap, leading him to be pretty rusty during his climactic rematch with the Mad Titan. If Captain America hadn’t been able to wield Mjölnir, the battle could’ve easily been lost.

Regardless, Thor is absolutely a contender for the title of Earth’s mightiest hero.

Related: Sony Turned Down The Chance Of Buying Marvel TWICE. Here’s Why

The Incredible Hulk could be Marvel‘s strongest hero

Mark Ruffalo‘s Incredible Hulk certainly may be the strongest Marvel hero in the comics, but in the Marvel Cinematic Universe… not so much. The character obviously boasts superhuman strength and an advanced healing factor, but in the comics he’s practically unstoppable. His resume includes beating down a literal God – Loki – and going toe-to-toe with the Vibranium enhanced Ultron in 2015’s Age of Ultron.

The Marvel Universe‘s Hulk gets more powerful as his rage increases, something that only lightly carries over to the movies. Many fans were also disappointed to see that The Hulk didn’t return (properly) in Avengers: Endgame where he seems significantly weaker. He was even beaten by Thor in Ragnarok.

However — and this is a huge however — he was able to wield the Infinity Gauntlet and live. Thanos is the only other being that we know of who has accomplished this in the movies, and it ‘nearly killed’ the Mad Titan. Props to Hulk for that one.

Captain Marvel is one of the most powerful Marvel characters

Whichever way you slice it, Brie Larson’s Carol Danvers / Captain Marvel is up there as one of the strongest avengers. The character is notable for being the first female hero to be given their own movie, beating out original Avenger Black Widow.

Captain Marvel‘s powers are vast and insanely OP, with super-strength, flight, and powerful energy beams at her disposal to name just a few. She is a Kree – Human hybrid with incredible abilities that rival Thor, Hulk, and other powerful heroes like Wanda Maximoff / Scarlet Witch.

Her solo movie gave us a taste of this power, but she only became a contender for strongest character in Avengers: Endgame, when she single handedly took out an entire ship in one move, and more than held her own against an Infinity Gauntlet powered Thanos. The character is confirmed to return again, so perhaps we’ll see this hero face off against Hulk and Thor in a mutual misunderstanding to give us a real comparison.

The master of the mystic arts is a mighty Marvel character indeed. Unlike Iron Man, Doctor Strange held his own against Thanos pretty well during Infinity War, and the Mad Titan had more than one infinity stone at that point. We’ve also seen Doctor Strange take on other-worldly demons and win as well as have the power of time travel at his disposal.

However, in a straight fight, the good doctor is obviously still just a man and wouldn’t stand a chance in a battle against Thor, The Hulk, or Captain Marvel.

Yet, the sheer untapped potential within Strange’s arsenal certainly could see him become the strongest character in the MCU, particularly as he starts hopping through the multiverse in his upcoming sequel.

Kevin Feige says we’re all wrong about the strongest Avenger

If you want to hear the answer to the strongest Avenger from the master himself, listen to Kevin Feige. He says that the strongest hero in the MCU isn’t Thor, Strange, Hulk, or even Captain Marvel.

‘I think it’s interesting, if you look at Endgame, Wanda Maximoff was going to kill Thanos … That’s as scared as I’ve ever seen Thanos, and if he hadn’t said Decimate my entire team to get her off of me, I think she would have done it.’

He’s got a point. Scarlet Witch is clearly a powerful avenger, which is reflected in her comic counterpart. The hero has reality-bending powers which are thought to be explored in upcoming installments like WandaVision and the aforementioned Doctor Strange in the Multiverse of Madness. Wanda really comes into her own in Avengers: Endgame but by the time we get around to WandaVision, her powers are seemingly limitless as she can control life and death and bend reality to her will.

We also now know for sure that Wanda is the MCU’s strongest Avenger thanks to the fifth episode of WandaVision, which features a conversation between Darcy Lewis (Kat Dennings), Jimmy Woo (Randall Park), and Monica Rambeau (Teyonah Parris). Here they discuss the events of Avengers: Endgame and confirm Feige’s assertion that Wanda could’ve taken down Thanos alone, thereby declaring her the strongest. However, they do also make reference to Captain Marvel, suggesting she may be a close second. It’s also worth nothing that her first appearance in Age of Ultron sees her land the final blow on Ultron himself.

Feige’s answer puts a whole new spin on the debate that will have any Marvel fan hotly debating for hours on end. But what about the comics? Who is the strongest in the Marvel source material? While Wanda is once again a contender, the answer may surprise you.

Sentry and Hulk are the most powerful Avengers in the comics

For those who don’t know, The Sentry is essentially Marvel‘s Superman. He is an uber-powerful hero with the power of ‘one-million exploding suns’ at his disposal. He is able to easily dispatch any hero or villain, but he is hindered by psychological issues that feed into the revelation that he is simultaneously a villain known as the Void.

However, when The Sentry is operating at full capacity he’s a force to be reckoned with. During the World War Hulk event, the Sentry was brought in as a last resort by Iron Man and a handful of other Avengers to take down the out of control Hulk.

Hulk is clearly one of the most powerful beings in the Marvel Universe in the comics, but The Sentry is more than able to hold his own. Again, his mental instability makes him hesitant to unleash his powers, but when he does, the battle ends with Sentry unconscious and the Hulk reverted to Bruce Banner.

At any rate, The Sentry is likely the comics’ most powerful hero as he was holding back, while The Hulk was at his most angry due to the betrayal of his former friends. It’s also worth noting that Sentry is responsible for carrying the Marvel zombie plague in another universe.

If Marvel ever decides to bring Sentry into the MCU, you can bet he’ll be the strongest Avenger, particularly with our weakened Ruffalo‘s Hulk is compared to his comic counterpart. However, Hulk is certainly no pushover in the comics and his “ultimate form” can even rival the power of Galactus, a world-eating cosmic entity.

As for the MCU, while I personally feel that Thor and Captain Marvel are very close to being the strongest Avenger, who am I to disagree with Mr. Feige.  — Scarlet Witch it is!

At the end of the day, a character’s power level doesn’t affect how much we love them. Iron Man, Black Panther, and Steve Rogers are pretty low tier in the power rankings. However, they’re still fan favorites – there’s more to an MCU hero than their power level!

Do you agree with our breakdown? Let us know in the comments below.