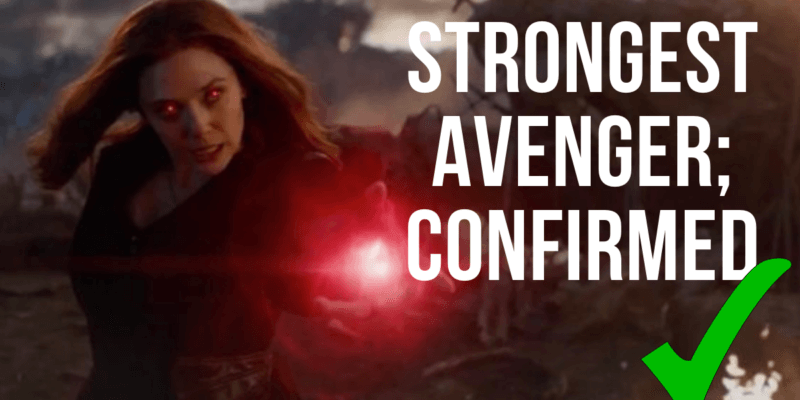 WandaVision continues to heat up as the show has now made direct reference to the events of Avengers: Endgame, and confirmed that Wanda (Elizabeth Olsen) is indeed the strongest MCU Avenger.

The dialogue confirms Marvel Studios boss Kevin Feige’s comments and the opinions of many Marvel fans.

What did the cast of WandaVision say?

Scarlet Witch / Wanda Maximoff is indeed the strongest member of the Avengers, according to Monica Rambeau. The exchange came as she, Darcy Lewis, and Jimmy Woo discuss the battle at the Avengers Facility.

As you’ll recall, Wanda nearly singlehandedly took out Thanos (Josh Brolin) using her mind-bending powers as she declared, “You took everything from me!”

The Mad Titan replied with a simple, “I don’t even know who you are”. This is because the Thanos in Avengers: Endgame is different from the one seen in Avengers: Infinity War. Thus, he didn’t actually kill Vision (Paul Bettany) in this timeline and has yet to complete the “snap”.

Thanos came closer to death than ever before (excluding when Thor executed the Infinity War version!), and he was forced to call on a blitz to stop her, taking out some of his own forces at the same time.

The lovable gang of WandaVision recalled these events in the fifth episode. Interestingly, they mirror the fan debate by also bringing Captain Marvel into the equation:

Darcy: ‘That would mean she’s wielding an insane amount of power’

Jimmy: ‘Far exceeding anything she’s displayed in the past.’

Monica: ‘She could’ve taken out Thanos on her own if he hadn’t initiated a blitz. I mean, nobody else came close.’

Darcy: ‘Her powers came from an Infinity Stone too, right?’

Related: ‘WandaVision’ is Taking Inspiration from ‘The Office’ and ‘Modern Family’

In the Marvel comics, however, she’s super powerful and can manipulate reality at will. Thankfully, this is what we’re starting to see in WandaVision, as she is seemingly able to warp reality, control the minds of people, and resurrect the dead. Whoa. I’d like to see Hulk or Captain Marvel do that!

All of this confirms that Scarlet Witch is absolutely the strongest hero. However, it’s raised the uncomfortable question: is Earth’s mightiest hero actually a villain? It certainly seems like the show could be going that way.

The comic book character has certainly done some questionable things in her time, so we’ll have to see whether Wanda’s new powers have similar implications in WandaVision.

Who do fans consider the strongest MCU Avenger?

As we’ve discussed before, it’s usually a contest between Scarlet Witch, Captain Marvel, Thor, and the Hulk. Captain Marvel/Carol Danvers (Brie Larson) is certainly a contender. She received her powers from the space stone. This means, like Vision and Scarlet Witch, she channels the power of an Infinity Stone.

Notably, the hero was also able to go toe-to-toe with Thanos during the events of Avengers: Endgame. The Mad Titan eventually gained the upper hand by launching her using the might of the power stone.

As for Thor (Chris Hemsworth), he certainly is up there in the rankings. Of course, the Asgaardian was the one who killed the Infinity War Thanos and his appearances in Thor: Ragnarok and Avengers: Infinity War certainly see him at full power. Hulk (Mark Ruffalo) may be the most powerful hero in the comics, but the Marvel Cinematic Universe has somewhat nixed his healing factor, and he’s not really a contender for strongest MCU Avenger these days.

However, if you believe the characters in WandaVision, this debate has an easy answer. The strongest Avenger is absolutely Wanda — just like Kevin Feige said.

But what do you think? Let us know in the comments below.