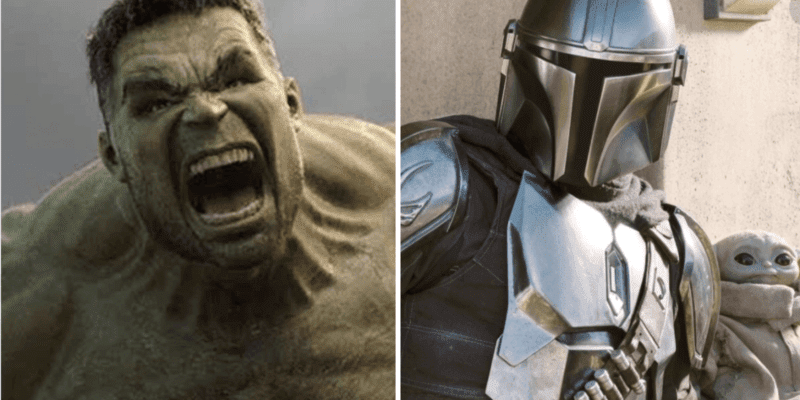 Actors Mark Ruffalo and Pedro Pascal are both Walt Disney Company royalty at this point.

Disney purchased Marvel Studios in 2009 and Lucasfilm from George Lucas in 2012, meaning that both Bruce Banner/The Hulk — who Ruffalo plays in the Marvel Cinematic Universe — and bounty hunter Din Djarin — who Pascal plays in The Mandalorian — are both, technically speaking, Disney characters.

Earlier this week, the 2021 Golden Globe Awards nominations were announced, with both Ruffalo and The Mandalorian in contention.

Ruffalo was nominated for Best Performance by an Actor in a Mini-Series or Motion Picture Made for Television for his work as Dominick and Thomas Birdsey in HBO’s I Know This Much Is True. He won an Emmy for this role last year.

Showrunner Jon Favreau and executive producer Dave Filoni’s Emmy-winning Disney+ Mandalorian series, on the other hand, is up for Best Television Series – Drama against Lovecraft Country, The Crown, Ozark, and Ratched.

Both Ruffalo and Pascal are known for their active social media accounts and the duo took to Twitter for some banter following their respective award ceremony nominations.

Ruffalo was accidentally named in a Tweet congratulating The Mandalorian cast and crew on their Golden Globe nomination. He quipped:

I guess I’m a Mandalorian now.

Ruffalo, ironically, has made no secret of his desire to join the Star Wars universe. He recently shared on social media that he would love to be part of Marvel director and actor Taika Waititi’s upcoming Star Wars movie, which is currently slated for a 2025 theatrical release.

The fandoms also seem to think this is an excellent idea, with many Marvel fans and Star Wars fans replying to Ruffalo’s Tweet.

I think most of us agree that it would be great if you were part of the cast.

How can this mix up between @PedroPascal1 and @MarkRuffalo happen?? maybe Din Djarin can adopt the Hulk to be his foundling.. #ThisIsTheWay Congratulations Mandalorian: @PedroPascal1 and to the rest of the cast and the Crew – u deserve all the nominations and awards

How can this mix up between @PedroPascal1 and @MarkRuffalo happen?? ???maybe Din Djarin can adopt the Hulk to be his foundling.. #ThisIsTheWay Congratulations Mandalorian: @PedroPascal1 and to the rest of the cast and the Crew – u deserve all the nominations and awards ???

Nothing, of course, has been confirmed — and the odds of Ruffalo appearing in the Star Wars franchise are probably slim, in reality — but it would be fantastic to see Ruffalo and Chilean-born Pascal take on Star Wars together someday. A fan can dream.

Plus, this wouldn’t be the first time an actor has blurred the line between fandoms.

Additionally, there are already rumors that Iron Man and Avengers star Robert Downey Jr. might be playing Grand Admiral Thrawn in Mandalorian spinoff series, Ahsoka, alongside Rosario Dawson’s Ahsoka Tano, so never say never for stars crossing from one franchise to another.

What’s next for Pascal and Ruffalo?

Both actors are gearing-up for new Disney projects in the near future.

Now that his latest project, Wonder Woman 1984, has released, Mandalorian star Pedro Pascal is set to begin shooting The Mandalorian Season 3 on April 5, 2021 in Los Angeles, presumably utilizing “The Volume” soundstage that was made famous in Disney Gallery: The Mandalorian.

Though few details have been officially released about the third season of the hit Star Wars series, we can take some cues from the second season.

For example, we know that Grogu (AKA The Child AKA Baby Yoda) was spirited away by iconic Jedi Luke Skywalker (Mark Hamill) in the Season 2 finale episode, so there’s a chance he won’t surface in Season 3 — at least not at first.

Furthermore, the Darksaber storyline was not wrapped up in The Mandalorian Season 2. Djarin defeated Moff Gideon (Giancarlo Esposito) in battle, winning the black-bladed saber and, therefore, the de facto title of Manda’lor.

This, of course, won’t sit well with Bo-Katan Kryze (Katee Sackhoff), whose sole goal is to retake Mandalore to avenger her sister, Duchess Satine Kryze’s, death. Although nothing has been confirmed, it is likely that Kryze and her Nite Owl warriors will return in Season 3.

Ruffalo, for his part, is not as busy with Disney projects at this time. He recently finished work on Marvel’s upcoming What If…? series and is set to appear in She-Hulk in 2022. The series is not yet filming.

Currently, the actor is involved in two films — The Adam Project and Newsflash.

What do you think? Should Mark Ruffalo be given a shot in a galaxy far, far away? It seems like Pedro Pascal would be 100% onboard!