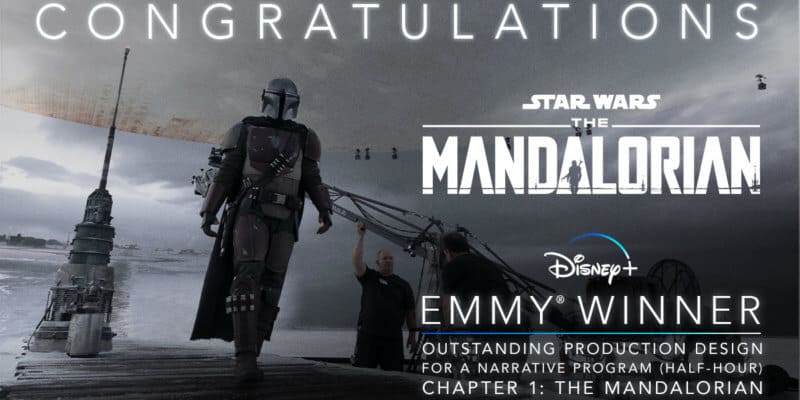 As the Emmy wins are being released we have been waiting to see what Disney+’s hit Star Wars spin off show was going to nab. With 15 Emmy nods to the series, The Mandalorian was seemingly destined to win an Emmy. And although the awards are just beginning, the show has taken on it’s first win!

Congratulations to #TheMandalorian creative team on their Emmy® win for Outstanding Production Design for a Narrative Program (Half-Hour). #Emmys2020

Congratulations to #TheMandalorian creative team on their Emmy® win for Outstanding Production Design for a Narrative Program (Half-Hour). #Emmys2020 pic.twitter.com/TJ2PiEq9PW

If you have seen the show, you know the production design of Chapter 1: The Mandalorian is superb and this award is well deserved.

The Mandalorian won against:

What other Emmys is The Manalorian up for?

How are the Emmy’s working this year?

So although The Mandalorian won it’s first Emmy this evening, there are still many more Emmy ceramonies to go in this 2020 awards season. The Emmy dates are as follows:

The awards for The Mandalorian will take place over all of the above states nights, with heavy hitters such as Outstanding Drama Series being awarded this Sunday evening. Many may not know, but this is a huge deal for the Star Wars franchise. No live-action film or show has taken home an Emmy for 35 years, making The Mandalorian the first in a very long time. Plus, every episode except for episode 5 (‘The Gunslinger’) received a nomination in some way – only reinstating the quality that Disney brought to this show. With so many Star Wars series on their way to Disney+ such as the ‘Obi-Wan’ series, a big win could pave the way for their future success.

Season 2 of The Mandalorian will be dropping October 30th on Disney+, and as a brand new viewer to the franchise — I cannot wait to see where the series takes us!

We will be paying attention to see what other Emmy wins The Mandalorian and Disney takes home!

Comments Off on Disney+ ‘The Mandalorian’ Wins Its First Emmy