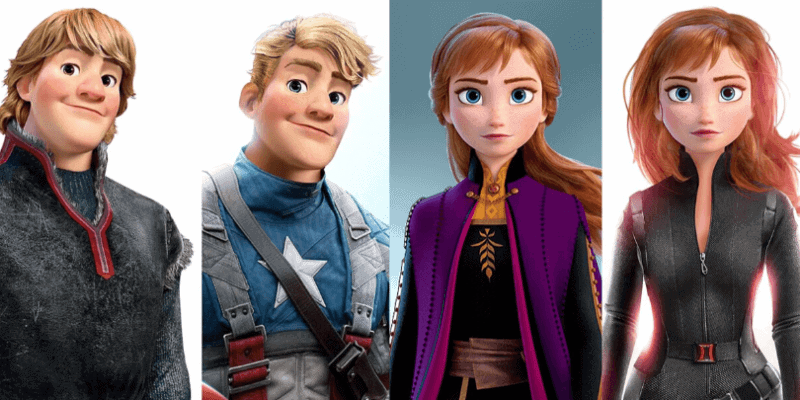 Marvel’s Avengers and classic Disney characters seem to go hand in hand. We’ve previously seen artists reimagine Disney princesses as super cool superheroes as well as drawing them in almost every style you can imagine.

Instagram artist Samuel Cheve has taken this one step further by reworking a tonne of classic Disney characters to make them look just like Earth’s mightiest heroes.

This is the mashup we never knew we needed! 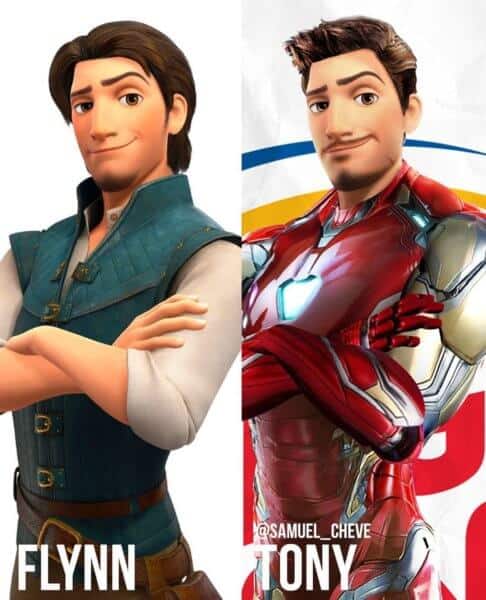 Perhaps the most iconic superhero of this generation, Tony Stark / Iron Man provides the Marvel universe with The Avengers Headquarters and is eventually the one to defeat Thanos after being nearly killed by him in Infinity War. Flynn Rider, the dashing character from Tangled cuts a perfect figure as this iconic superhero. Samuel even got his nose right!

The haircut definitely works wonders for Flynn as he channels his inner Robert Downey Jr. This one might be our favorite mashup because the characters’ personalities fit just as perfectly as their looks. Flynn Rider could definitely take on Thanos. Just sayin’.

Wreck it Ralph as Happy Hogan 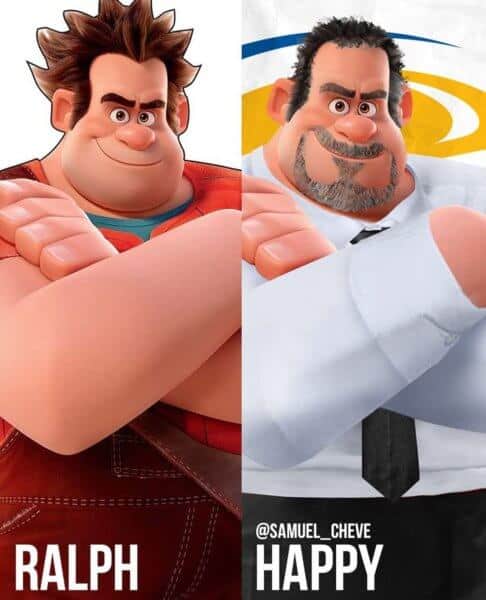 But what is Tony Stark without his loyal bodyguard, Happy Hogan? Marvel heroes are only as good as their sidekicks, and Wreck it Ralph makes the perfect Disney World version of Jon Favreau’s character. Alright, it’s a collection of Disney characters as Avengers and he’s not quite an Avenger, but he’s a pretty key player in the Marvel Cinematic Universe. I guess Zangief was right; ‘just because you are bad guy, doesn’t mean you are bad guy!’

But if Ralph is Happy, who would play Peter Parker’s Aunt May…? Unless Samuel does a mashup of Marisa Tomei and a Disney princess, we’ll never know. 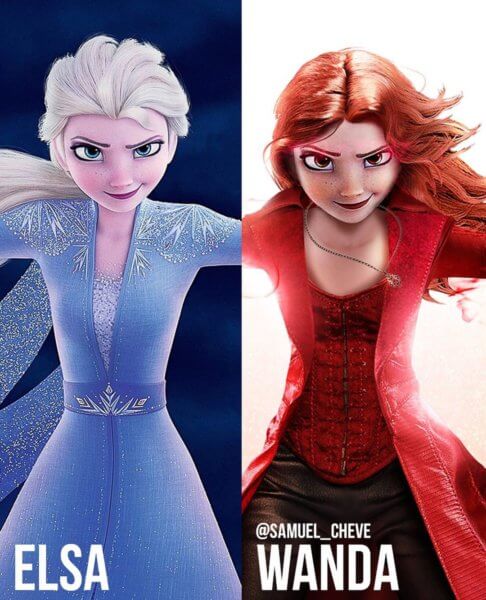 This Disney princess turned Queen turned protector of the Forest is the perfect person to represent this iconic Marvel character. Scarlet Witch is one of the most powerful Avengers and it’s pretty safe to say that Elsa is the most powerful Disney princess! Maybe we’ll see an alternate reality where Scarlet Witch is actually Elsa in the upcoming Doctor Strange in the Multiverse of Madness.

With what we’ve seen in WandaVision, this is a match made in Marvel mashup heaven. Perhaps the most powerful Disney character of all time playing the strongest Avenger! Though ice powers are pretty different to Wanda’s reality manipulation, the crossover definitely works.

Related: Sony Pictures Has Its Marvel Universe Name and It’s a Mouthful 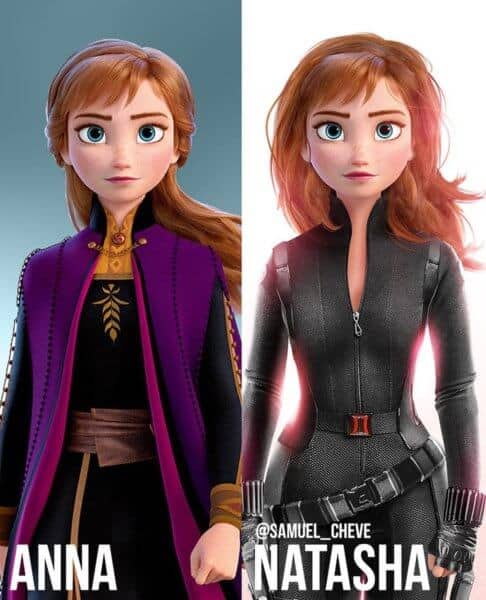 Though Black Widow STILL looks to be delayed, we love Natasha all the same. Anna fits perfectly as Romanoff, though we wonder who would play Red Guardian in the Disney world! I think King Triton would be a good fit. 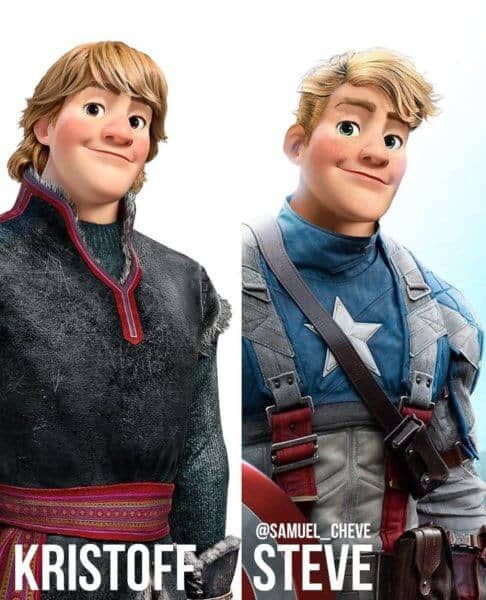 However, whatever suit he’s in, Anna’s partner in crime certainly rocks the super-soldier look. I wonder who his favorite Marvel Chris would be… 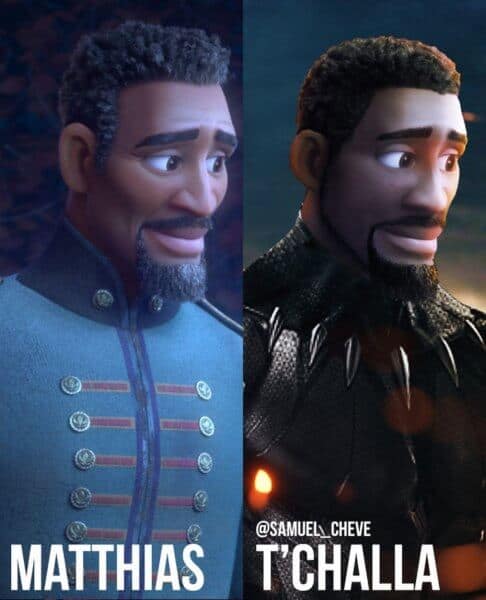 The newest character from Frozen II looks fantastic donning the mantle of the Black Panther. We can absolutely imagine Matthias in a superhero movie thanks to his regal pose and cool voice, but the vibranium suit is just the icing on the cake.

Sadly, the passing of Chadwick Boseman puts this picture in a new light. Still, an excellent and fitting addition to the “Disney characters as Avengers” collection.

We want to see so much more of Samuel’s work! We need an Avengers mashup for every single Disney animated classic. In the meantime, make sure you check out the full collection on Instagram.

Which Disney character in the Marvel Cinematic Universe do you like? Let us know in the comments below.