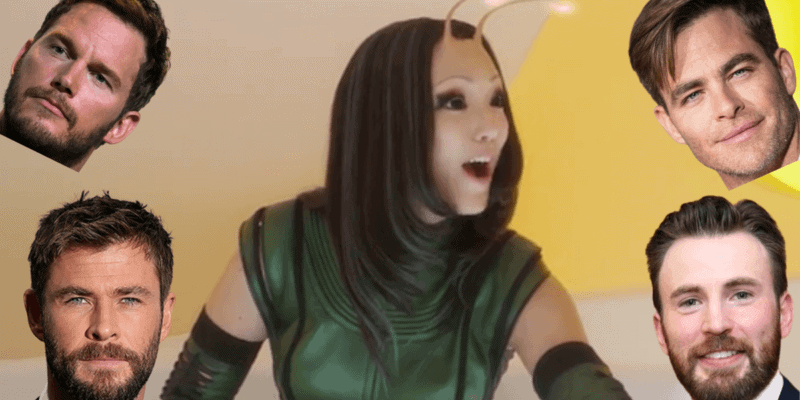 The “Chris saga” continues as another famous face chimes in with their favorite Marvel Chris.

Some of you may remember a few months ago when some dubbed Chris Pratt as the ‘Worst Hollywood Chris’. Well, his Guardians of the Galaxy vol. 2 co-star Pom Klementieff disagrees!

The Mantis actor has thrown her hat in the ring for Chris Pratt – kind of.

Who is Klementieff’s favorite Marvel Chris?

Peter Quill / Star-Lord actor Chris Pratt was declared the winner, and his co-star decided to congratulate him on Instagram, seemingly confirming that he’s her favorite — take a look.

As you can see, the post has its tongue firmly in cheek! It congratulates Pratt but features a fictional book with him on the front cover. Yet, the title reads, ‘[Chris] Hemsworth: The One and Only’. The Mantis actor is having a lot of fun with both us and Pratt.

Perhaps we’ll never know who Klementieff’s favorite Marvel Chris truly is! However, she’s starred alongside Pratt in three films: Infinity War, Endgame, and Guardians of the Galaxy vol. 2 — so her allegiance to him wouldn’t be surprising. Hopefully, we’ll also see her pop up in Thor: Love and Thunder, as several of the other Guardians may allegedly reappear, according to a rumor.

What are the AGBO Films Superhero Fantasy Football League?

The League is a charity initiative that partnered with Fanduel as its presenting sponsor. In total, the company has donated $1.25 million. $1 million of this went to the charities that the participating celebrity players represent, while the additional $250,000 was donated to charities in memory of Chadwick Boseman. The Black Panther actor tragically passed away last year from cancer.

Sadly, Chris Evans has now seemingly departed the Marvel Cinematic Universe, but we’re still super excited to see Chris Pratt and Hemsworth team up in Thor: Love and Thunder in 2022 when Mjolnir will be wielded by Natalie Portman for the first time. However, we’re still one Hollywood Chris short. Hopefully, Chris Pine will join the MCU at some point so that we can have 3 Chris’ back in the mix. A the moment, Pine is mostly a DC boy, known for his role as Steve Trevor in Wonder Woman and its recent sequel Wonder Woman 1984.

We’d love to see what other Marvel comics actors think. Who does Doctor Strange actor Benedict Cumberbatch prefer? What about Zoe Saldana or Mark Ruffalo? Only time will tell.

We hope this funny “Chris saga” continues to entertain!

Comments Off on ‘Guardians’ Actor Reveals Her Favorite Chris