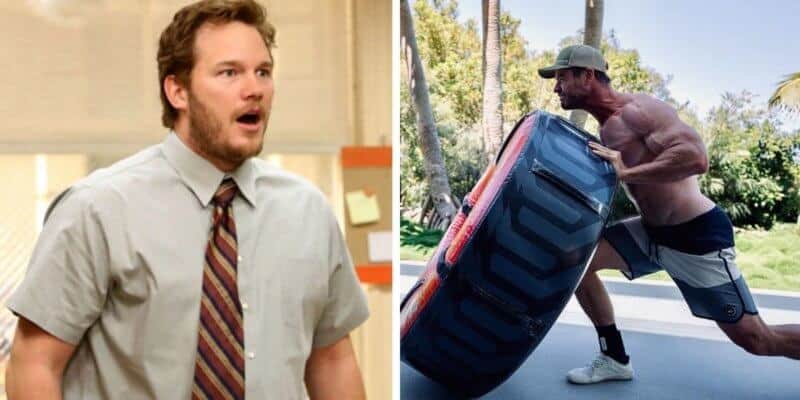 When if comes to the big names in Hollywood, especially in the MCU, we often see some very athletic and fit actors take to the screen, but it takes a lot of training to get them looking like an ancient god.

We recently found out that Guardians of the Galaxy star Chris Pratt would be joining Thor’s Chris Hemsworth in  Thor: Love and Thunder. Directed by Taika Waititi, this huge ensemble cast may be officially part of the Thor franchise, but it is reported to have an Avengers 5 vibe to it considering how many Marvel Cinematic Universe players will be showcased.

Aside from Thor’s minor setback in Avengers: Endgame (remember when Thor ate one too many bags of chips and became a much wider version of himself?), Chris Hemswoth has always had an incredibly chiseled physique. According to Marvel,  “[Thor] Odinson wields the power of the ancient Asgardians to fight evil throughout the Nine Realms and beyond.” I don’t know about you, but to me that description screams strength, which is something the Marvel actor has to continuously work towards when playing Thor.

And if it were me next to Hemsworth, I may feel slightly self conscious, which seems to be exactly how Chris Pratt is feeling lately.

Hemsworh posted the below Instagram shot the other day, calling him being a real life Thor and flipping a tire bigger than myself a “cheat day”.

“Hey bud, Just heard from my trainer and he needs you to stop working out because since we’re gonna be in the same movie and everything he doesn’t want me to stand next to you if you look like that so I’m gonna need you to put on 26 lbs real quick cool thanks.”

The Guardians of the Galaxy star has also changed his body for the role, and has to keep up the appearance as he continues to play Star-Lord, and it seems like there is some fun competition amongst our favorite superheroes. Hemsworth replied to Pratt in a joking manor, “Don’t worry mate we can just both use the same fancy filter that’s been applied here. It’s called instashred.” I am not sure if someone can fake those muscles, but it is nice to see that Hemsworth is not at all conceded, even when he looks like a real-life Thor!

Are you excited for Thor: Love and Thunder?