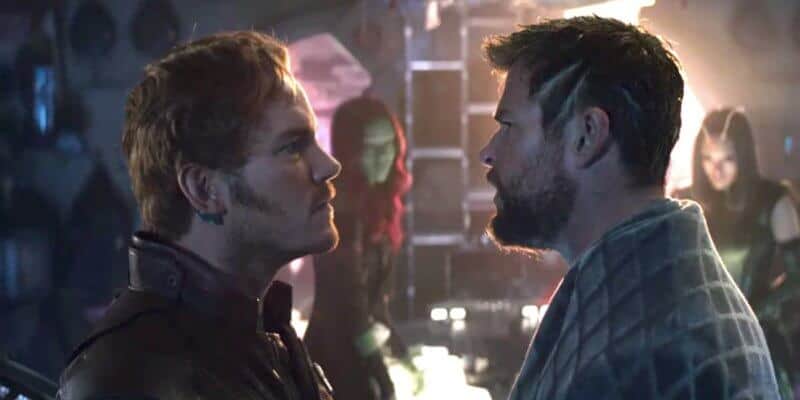 When we last saw Thor and the Guardians of the Galaxy, they had banded together. Star-Lord (Chris Pratt) was about to set off on a quest to find Gamora (Zoe Saldana), and Thor (Christ Hemsworth)–having given up his throne to Valkyrie (Tessa Thompson)–wanted to set off with them on another adventure.

Originally, the film order was going to be Guardians of the Galaxy: Vol 3, and that would set the expectations for the fourth installment of Thor’s series, Thor: Love and Thunder. Now it appears that things have changed.

After the delays that have befallen Guardians 3–with James Gunn being fired and then re-hired while he was off directing The Suicide Squad—Thor: Love and Thunder will serve as the set up for Guardians of the Galaxy: Vol 3.

The news comes from Vin Diesel who spoke about both Thor 4 and Guardians 3 in an interview for his latest film, Bloodshot. But one has to wonder if he was even allowed to say anything or if he pulled a “Tom Holland.”

The man responsible for bringing Groot to life (as well as Baby Groot and Teenage Groot) said: “I am waiting and excited for my friend James Gunn to knock this next one out of the park. He took The Suicide Squad so he’s about to embark on it. Thor will also, the director talked to me about Thor will incorporate some of the Guardians of the Galaxy. That’ll be very interesting, nobody knows, maybe I shouldn’t have said anything.”

At this point, not much is known about either film. For Thor: Love and Thunder, all we really know is that it will tell the story about how Natalie Portman’s character, Jane Foster, becomes a female Thor, Christian Bale will be the main villain and Taika Waititi will return as director after directing the third and arguably most successful film of the franchise, Thor: Ragnarok. As for Guardians of the Galaxy: Vol 3, we know that James Gunn is still directing and the script was completed months ago. The Norse god of thunder will be joining them to continue the adventures and banter we saw in Avengers: Infinity War.

But, knowing the creative geniuses at the helm of both these movies, we have no reason to suspect we will get anything but greatness.

Thor: Love and Thunder is scheduled to be released in theaters on November 5, 2021. Guardians of the Galaxy Vol 3 still does not have a release date set.

The next movie of the Marvel Cinematic Universe is still scheduled to be Black Widow, in theater’s April 24, 2020.

Comments Off on Confirmed: Guardians of the Galaxy will Appear in “Thor: Love and Thunder”