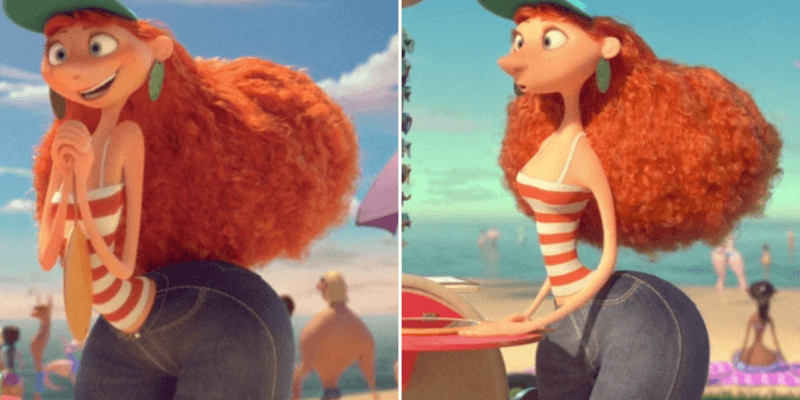 Disney has taken retroactive heat for its visual portrayal of a woman in a 2016 short. The “Inner Workings controversy” soon blew up and saw hundreds of thousands of comments.

Twitter users interacted with a post that brought up an old short titled Inner Workings, and the internet soon exploded in a social media frenzy. Pretty soon, the controversial short film had hit major national news sites including Lad Bible.

But what is Inner Workings, and what was the fuss about?

You might remember Inner Workings as the animated short that was shown before Disney’s Moana during its theatrical release way back in 2016. It’s regarded as a pretty innocent six-minute film that follows the main character Paul, an ordinary man who battles with his anthropomorphized internal organs to do what is expected vs. what is enjoyable.

Halfway through the short, he encounters a woman named Kate, who gives his heart a strong reaction. Eventually, she sells him some sunglasses after he learns to embrace a bit of risk in his life. The credits show them married with children.

The controversy comes from the way Kate is drawn — her bodily proportions are highly unrealistic. Although we can see other characters throughout the film with these oddly proportioned bodies, the character Kate has garnered some attention. Though the film didn’t attract any widespread criticism at the time of its release, a Twitter thread put it in a new light for 2021 audiences.

The thread was started by a user named @Glitch_Plantbro, who shared two images of Kate and simply wrote, “In no world did Pixar need to do this.” This soon sparked an entire thread about the Inner Workings controversy. Check it out:

In no world did Pixar need to do this pic.twitter.com/Yg9lpfMNie

Now, putting aside the obvious error that this is a Disney short and not a Pixar one, Glitch’s words seemed to resonate with a lot of people (over 180,000 have liked the Tweet). Twitter users began to comment that the character perpetuates a long history of drawing animated characters with unrealistic — and often idealized — body proportions.

They also made the point that in a short based around organs — it’s difficult to work out where hers would be! Check out what people were saying (warning: some adult language):

BUT WHERE ARE HER ORGANS?!

Yo where tf are her elbows tho pic.twitter.com/yPzjVatkIt

Some fans also pointed out that none of the characters seen in the short (particularly those on the beach behind Kate!) look realistic:

Some defended Disney and the Inner Workings Girl’s shape

However, there were a few users who defended Kate. They suggested that animated movies, in general, tend not to recreate human body proportions exactly as they are in real life. Many pointed out other Disney films that also draw unrealistic body shapes and present characters in exaggerated ways.

I wouldn't call the proportions of Disney princesses realistic when most of them have heads bigger than their waists. Its just less pronounced exaggeration but its still exaggerated

Most commenters considered cartoons to be exaggerated versions of real-life, highlighting Mickey Mouse and Bugs Bunny as examples of anthropomorphized animals that aren’t “realistic”. It opens up an interesting debate as to when to draw the line when crafting depictions of real people.

However, it’s worth noting that the Inner Workings controversy follows a fan outcry for more body-positive representation, as Disney princesses have historically been drawn with the same body shape.

ITM readers weigh in on the Inner Workings debate

Our Inside the Magic comment section had a lot to say, with many commenting that none of Disney’s animated classics present a “realistic” depiction of body shape. Indeed, several people noted that the protagonist Paul has a highly unrealistic head shape; a cube. Many also argued that while it is heavily exaggerated, a skinny waist and larger thighs and backside is a body shape that many women have. Comments come from both the article and Facebook post:

‘Well, if it was to be realistic, why people are not complaining about a mouse speaking?’

‘Haha what. A cartoon? Unrealistic? Get outta town! Cartoons are never unrealistic!’

‘Who decides creative expression but the creator?!’

‘Don’t parents teach kids that cartoons / tv are not real? I’m pretty sure mine told me that tv was entertainment only – not reality…’

‘I have seen many women with a similar build, just because you don’t like it doesn’t mean its unrealistic.’

Many others pointed to other animated films made by Disney, Pixar, and even Dreamworks and Illumination, highlighting that the Inner Workings controversy is far from an isolated incident. Disney fans bought up Helen Parr / Elastigirl from Pixar’s The Incredibles as well as Grumpy from Snow White and the Seven Dwarves and Phineas and Ferb from, well, Phineas and Ferb. Additionally, Illumination’s Despicable Me was frequently mentioned for presenting a less than realistic shape with its presentation of Gru; a highly exaggerated villain.

Disney get people debating once again

All in all, the Inner Workings debacle saw over 180,000 likes, nearly 20,000 retweets, and just under 2,o00 comments. Add to that the national news coverage and you have yourself a pretty wild controversy! The saga follows the reevaluation of several films that some modern audiences now consider inappropriate, despite being accepted at the time.

Inner Workings is available to stream on Disney+ for those interested in watching the 2016 short film for themselves.

Related: Don’t Do This or You Will Be Kicked Out of Disney

What do you think? Is this an issue with the way women are presented in this Disney short film? Let us know in the comments below.