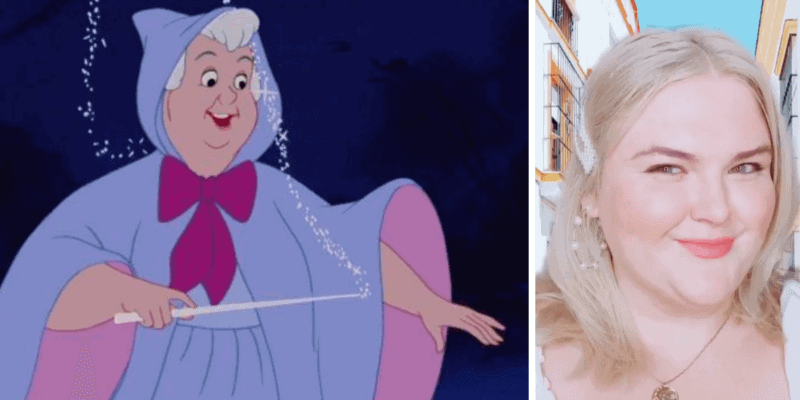 Disney continues to introduce diversity to its lineup of official Disney Princesses. And as the years go by, more and more people are speaking up and calling upon Disney to create Disney Princesses that they can relate to. One woman recently took to social media to share her pitch for a body positive Disney Princess.

Her idea? Give the Fairy Godmother a prequel and add her to the Disney Princess lineup.

Originally posted to TikTok and then shared to Instagram, Rosey Blair (on social media as @roseybeeme) shared her idea for introducing the Fairy Godmother from Cinderella as a body positive Disney Princess. Here’s what she has to say.

“So you want a body positive Disney Princess? Well, here’s how I think it could happen: A Fairy Godmother prequel.

Before she was the Fairy Godmother we all known and love, she was an apprentice dress maker, and her greatest wish in life was to make others feel beautiful.

Mary Alice loves making extravagant and whimsical dresses, a bunch of ‘bibbidi bobbidi boo,’ according to her boss. But her designs soon garner the attention of a certain spoiled rich girl in town: a young Lady Tremaine.

Knowing this could make all of her dreams come true, Mary Alice takes on the project with a crazy deadline. She might have to go on a journey to get a very rare and magical fabric.

Everyone in town doubts her, and they’ve already been making fun of her since she was a child because of how she looked.

Through some Disney magic, she learns that she has to give herself love before she can give it away to others.

That’s my pitch. And Disney, you can take it. Just invite me to the premiere.”

♬ When You Wish Upon a Star – Orchestra Maffei String Quartet

So, what’s body positivity? According to an article in Very Well Mind, “Body positivity refers to the assertion that all people deserve to have a positive body image, regardless of how society and popular culture view ideal shape, size, and appearance.”

Seeing as Disney has tackled issues of equality, judgement, acceptance, and confidence, it seems as though creating a movie that is centered around the idea of feeling confident and positive in your own skin — no matter how you look — isn’t far fetched. One could argue that a body positive Disney Princess aligns with Disney’s values.

But what about the other Disney Princesses and body positivity?  One commenter said, “I agree but I don’t think we should call this “body positive”. Plus size? Sure. But the other Disney princesses, although they’re thin, aren’t really against body positivity, especially with more recent ones about embracing yourself. There are already self-positive Disney princesses (Anna for example. She’s not super feminine or perfect, but she’s still kind and respected).”

To which Rosey replied, “I’m using that phrase because I want an element of body positivity to exist within the storyline. I am not in doubt of any other the others positivity ?.”

Disney has already shared that projects involving the Fairy Godmother (or fairy godmothers in general) are already in the works. However, with Rosey’s idea gaining traction online, we wouldn’t be surprised if the company took one of her suggestions and ran with it. We’ll just have to wait and see!

What do you think of the idea of introducing the Fairy Godmother as a body positive Disney Princess? Let us know in the comments!