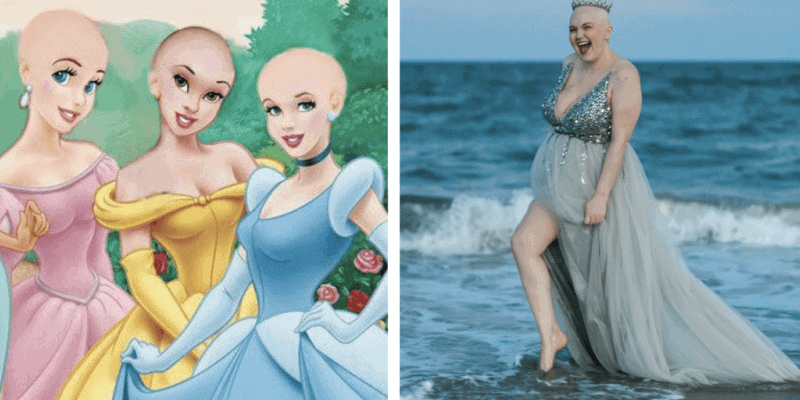 The Disney Princesses have long given women unrealistic hair goals, from Ariel’s perfect coif when she emerges from the ocean after her human transformation to Belle’s beautiful locks that manage to make a low-ponytail look good.

Credit where credit’s due, Moana’s messy bun is real life in action.

Now, a cancer victim from South Carolina is urging Walt Disney Studios to create a Princess character who has no hair at all. According to an ABC 15 news report, 25-year-old Myrtle Beach resident Natalie Thomas had it all:

“…a husband, Timothy, and a two year old son, Nate, she adored. She loved her job as a photographer.

On top of that, her family was getting ready to add a new baby girl. When she went to the hospital this January ready to welcome baby Bennett into the world, her life changed.

‘When I went in they told me I was not in labor,” Thomas said. “It turns out my daughter had been putting pressure on my left kidney where I had a cancerous tumor and she had caused it to hemorrhage and bleed out, and that’s the pain I was feeling.”‘

Now, months into her treatment, Thomas is still spending every other weekend undergoing chemotherapy. She requires constant assistance caring for her children and handing housework when she is able to be at home.

To combat the stress she is feeling as a result of her cancer treatment, Thomas decided to do a glamorous beach photo shoot.

“‘A whole bunch of people told me that I looked like a Disney princess, and I was like ‘that is a great idea.’ Now she’s using the photo-shoot to start a push for Disney to create a bald princess.

‘There’s a lot of little kids who don’t have somebody who look like us to look up to and I was like ‘that would be an awesome thing if Disney were to do that,’ she said.”

Thomas has approximately 3-and-a-half months of chemotherapy left. She intends to keep fighting hard to lead a long, full life with her family.

Disney Princesses inspire girls and women of all ages. This writer loves the idea of the Walt Disney Company supporting all women with cancer by creating a bald Disney Princess.

Cancer impacts tens of thousands of American families every year and a motivational Disney character fighting the same cancer battle could go a long way toward providing hope, particularly in pediatric cancer wards.

Do you think there should be a bald Disney Princess undergoing cancer treatment?